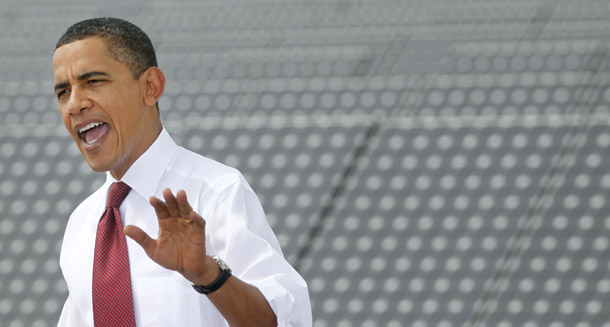 In an hour-long interview with Rolling Stone, “Ready for the Fight,” President Obama talked about a wide range of issues, including two words he’s rarely mentioned since taking office: climate change.

“Part of the challenge over these past three years has been that people’s number-one priority is finding a job and paying the mortgage and dealing with high gas prices. In that environment, it’s been easy for the other side to pour millions of dollars into a campaign to debunk climate-change science.

I suspect that over the next six months, this is going to be a debate that will become part of the campaign, and I will be very clear in voicing my belief that we’re going to have to take further steps to deal with climate change in a serious way.

That there’s a way to do it that is entirely compatible with strong economic growth and job creation – that taking steps, for example, to retrofit buildings all across America with existing technologies will reduce our power usage by 15 or 20 percent. That’s an achievable goal, and we should be getting started now.

When article author Jann Wenner asked, James Hansen, NASA’s leading climate scientist, has said this about the Keystone pipeline: that if the pipeline goes through and we burn tar sands in Canada, it’s “game over” for the planet. What’s your reaction to that statement?

James Hansen is a scientist who has done an enormous amount not only to understand climate change, but also to help publicize the issue. I have the utmost respect for scientists. But it’s important to understand that Canada is going to be moving forward with tar sands, regardless of what we do. That’s their national policy, they’re pursuing it.

With respect to Keystone, my goal has been to have an honest process, and I have adamantly objected to Congress trying to circumvent a process that was well-established not just under Democratic administrations, but also under Republican administrations.

The reason that Keystone got so much attention is not because that particular pipeline is a make-or-break issue for climate change, but because those who have looked at the science of climate change are scared and concerned about a general lack of sufficient movement to deal with the problem.

Frankly, I’m deeply concerned that internationally, we have not made as much progress as we need to make. Within the constraints of this Congress, we’ve tried to do a whole range of things, administratively, that are making a difference – doubling fuel-efficiency standards on cars is going to take a whole lot of carbon out of our atmosphere. We’re going to continue to push on energy efficiency, and renewable energy standards, and the promotion of green energy. But there is no doubt that we have a lot more work to do.

When asked about his take on the state of the Republican Party, and what they stand for, President Obama replied:

First of all, I think it’s important to distinguish between Republican politicians and people around the country who consider themselves Republicans. I don’t think there’s been a huge change in the country. If you talk to a lot of Republicans, they’d like to see us balance the budget, but in a balanced way.
A lot of them are concerned about jobs and economic growth and favor market-based solutions, but they don’t think we should be getting rid of every regulation on the books. There are a lot of Republican voters out there who are frustrated with Wall Street and think that they acted irresponsibly and should be held to account, so they don’t want to roll back regulations on Wall Street.

But what’s happened, I think, in the Republican caucus in Congress, and what clearly happened with respect to Republican candidates, was a shift to an agenda that is far out of the mainstream – and, in fact, is contrary to a lot of Republican precepts.

I said recently that Ronald Reagan couldn’t get through a Republican primary today, and I genuinely think that’s true. You have every candidate onstage during one of the primary debates rejecting a deficit-reduction plan that involved $10 in cuts for every $1 of revenue increases.

You have a Republican front-runner who rejects the Dream Act, which would help young people who, through no fault of their own, are undocumented, but who have, for all intents and purposes, been raised as Americans. You’ve got a Republican Congress whose centerpiece, when it comes to economic development, is getting rid of the Environmental Protection Agency.

Think about John McCain … Here’s a guy who not only believed in climate change, but co-sponsored a cap-and-trade bill that got 43 votes in the Senate just a few years ago, somebody who thought banning torture was the right thing to do, somebody who co-sponsored immigration reform with Ted Kennedy. That’s the most recent Republican candidate, and that gives you some sense of how profoundly that party has shifted.

In January, the group spent $6 million in TV ads in battleground states attacking Obama over Solyndra, even though the investigation found no wrong-doing.

Americans For Prosperity takes credit for the culture of climate denial that’s taken over the GOP and have turned the Solyndra situation into attack on clean energy in general, convincing the public that it’s unreliable and insignificant.