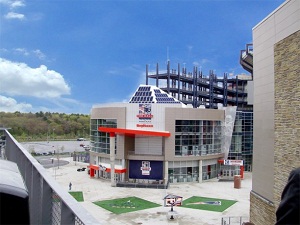 Gillette Stadium, home of the New England Patriots will triple the amount of renewable energy produced at the stadium and the adjacent Patriot Place shopping center with a 1-megawatt photovoltaic (PV) array.

NRG Energy will install the project under an agreement The Kraft Group, which owns the complex.

It’s actually the second solar installation at the complex.

Patriot Place already has a total of 525 kilowatts of solar installed on seven of its buildings. That array was installed in 2009. The new solar system also will be mounted at Patriot Place.

The new installation will consist of both standard and translucent PV modules partially covering Patriot Place’s walkways, according to an NRG press release. The installation also will include rooftop panels throughout the center.

NRG plans to complete construction of the installation in time for next year’s football season.

Under terms of the agreement, NRG also will purchase a wind turbine to produce even more of the complex’s electricity.

“Output of the wind turbine has not been determined yet,” Neuman said. And the company will provide all the additional power for the nearly 70,000-seat stadium and the more than one-million-square-foot retail and entertainment complex.

While there’s no telling if teams are yet competing for the most solar, the number is rising.

“Certainly the number of stadiums with renewable power is increasing, including those with systems designed, built and operated by NRG,” Neuman said.

But this is the second time NRG has installed solar at such a venue.

“FedExField is the only one to date, but in addition to Gillette Stadium, we’re also working on MetLife Stadium in New Jersey,” Neuman said.

FedEx Field is home to the Washington Redskins. That installation, in Landover, Md., is slightly larger, at 2 megawatts.