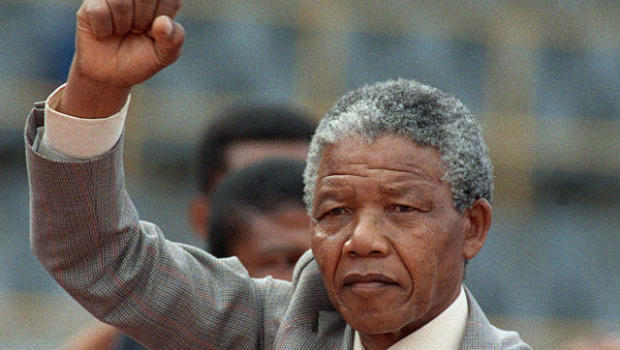 Former South African President Nelson Mandela, who served 27 years in prison for anti-apartheid activities and led his continent into a new era, has died at age 95.  He was born Nelson Rolihlahla Mandela in Transkei, South Africa. He was arguably the greatest man of our times and one of the greatest men history has ever known.

I had the honour of hearing him speak when he came to Montreal in 1990. I remember standing shoulder to shoulder with people from all walks of life as we crowded onto the Champ-de-Mars for his speech. Like so many others, I was inspired beyond words. That day planted a seed that would bear fruit several years later. Thanks in part to Mandela, I have now invested the whole of my life in the struggle for climate justice.

His passionate dedication to social and political justice is but one dimension of his historic stature, what truly sets him apart was his humility and his insistence on forgiveness and reconciliation. He was the man who defeated the Apartheid regime in South Africa, he was the first democratically elected President of his nation and he won a Nobel prize, yet he was unpretentious and his humility was profound. When average people told him that it was an honour to meet him, he would often reply, “it is an honour to meet you.”

The scope of his love for humanity cannot be measured, it was boundless. He was not fixated on the hardships of his own plight, yet he never forgot about those who suffered and died. He worked tirelessly to augur change for the living.

South African president Jacob Zuma said: “What made Nelson Mandela great was precisely what made him human. We saw in him what we seek in ourselves.”

Both officially and unofficially Mandela promoted reconciliation. During his presidency, from 1994 until June 1999, he created the Truth and Reconciliation Commission (TRC). He signed a new constitution into law in 1996, establishing a central government based on majority rule that would guarantee the rights of minorities.

Mandela also believed that sports can bring people together, so much so that he even encouraged black South Africans to support the once-hated national rugby team.

After languishing in prison for almost three decades he emerged in 1990 and he quickly succeeded in toppling the racist structure of apartheid without calling for a bloody civil war. After just four years of freedom he become the leader of his nation..

Mandela is a figure for the ages because his leadership was not merely based the fact that he was elected President of South Africa. What defines his greatness is his moral leadership which will resonate as a beacon of enduring truth for centuries.

Mandela rose through the ranks of the African National Congress (ANC) and in 1964, he stood trial for plotting to overthrow the government along with eight other members of the ANC. In 1965, he was sentenced to life in prison, a term he served until Feb. 11, 1990.

Mandela’s life in prison included hard labour in a quarry, when not working he was confined to a small cell without a bed and with a bucket for a toilet. Even during the dark days of his imprisonment and forced labour Mandela defended other prisoners.

Mandela legacy is too important to be confined to a few words that serve as his eulogy. However if we are to try to simplify his historic contributions we would have to appreciate how he gave us hope that a better future is possible.

Even before Mandela entered onto the world stage he showed the kind of dedication that should inspire us all. Mandela earned a Bachelor of Arts degree from the University of Fort Hare, during this time he was elected onto the Student’s Representative Council. He was suspended from college for joining in a protest boycott. Even then Mandala did what was right at his own personal expense. Mandela was qualified in law in 1942 and he went on to set up South Africa’s first black law firm with Oliver Tambo in August 1952.

Calling him an inspiration would be an understatement, he may be more aptly remembered as the world’s leading voice for social justice.

Mandela and the ANC galvanized international support for divestment and economic sanctions. These efforts succeeded in bringing an end to institutionalized racism in South Africa and this has had implications that reverberate around the world to this day.

Mandela and the ANC showed us just how valuable divestment, sanctions and boycotts can be. Many companies left South Africa due to rising social tensions, companies that stayed felt compelled to put pressured the Apartheid government to negotiate with the ANC. This included Shell Oil which continues to be the focus of divestment efforts due to their oil drilling operations in the Arctic and elsewhere.

The point to take away from Mandela and the ANC’s efforts is that divestment works. An estimated $20 billion was pulled out of companies doing business in South Africa. The result was that the racist regime was forced to capitulate as their currency collapsed and inflation soared.

Long before global warming was acknowledged by the public, Mandela and the anti-apartheid movement demonstrated that divestment is a powerful strategy to augur change.

Divestment always starts with the question, “what is our complicity in this?” Today, Bill McKibben of 350.org is asking this question as he spearheads fossil fuel divestment initiatives.

Lessons We Can Learn from Mandela’s Life

Few are better qualified to address Mandela’s legacy for climate change activists then Alex Lenferna. He is a proud South African, a Mandela Rhodes Scholar, a great admirer of Mandela’s life and work. Lenferna is also a climate activist and philosopher who was deeply inspired by Madiba, as he was respectfully and affectionately called.

Madiba has “helped to inspire generations of leaders to come,” Lenferna wrote. “While climate change was not the issue that defined Mandela’s Long Walk to Freedom, a reflection on Mandela’s philosophy and life reveals a profound overlap with the principles and commitments of the climate justice movement, and therein lies many important lessons not only for the climate community but for humanity as a whole to learn from.”

Lenferna wrote about Mandela’s commitment to Cosmopolitan Ubuntu, which is a philosophy that speaks to the interdependence and interconnectedness of people.

“Contrary to a strong individualism which permeates the Western world, the ethic of Ubuntu when combined with Mandela’s cosmopolitan valuing of all humanity, says that our own identity and well-being is tied into that of our community, the global community of humanity.”

This is a good way to define sustainable development, simply put, we prosper together, not at each others expense.

Lenferna also spoke about Nelson Mandela’s “idealistic pragmatism.”  Like Mandela, we who are engaged in the struggle of our times have to be flexible and pragmatic.

As Lenferna explained, the best way to honor Mandela, is by building on his memory to create a better world. Lenferna paraphrased Mandela when he said, “true enrichment is naturally aligned with the duty to act towards the growth and well-being of one’s community and to all of humanity.”

Mandela is a hero for people all around the world. When South Africa’s adopted Apartheid in 1948, it seemed like it would last forever, but Mandela knew better. He understood that injustice cannot endure and he bravely persevered and lived to see it defeated.

“Madiba’s legacy will live on in all those who share his commitment to changing the world for the better — to achieving a socially just society where human rights and dignity are at its core. Madiba inspired people across the world to stand up for their beliefs, and through his wisdom and commitment to peace, he inspired hope in all of us….In his memory, we’ll continue to hold those in power to account, and to challenge injustice wherever we see it. Hamba Kahle said “Rest in peace Madiba, with our never-ending gratitude…We love you.”

In the final analysis Mandela will be remembered as a man who rose above the limitations imposed on him and espoused a political and social philosophy that may have seemed hopeless at the time. Nonetheless, he succeeded, largely due to the fact that he stood steadfast in support of a transcendent truth. Like Gandhi before him, he succeeded in garnering the support of the world because of the moral righteousness of his cause.

We who continue the struggle to address the urgent issue of climate change also have a powerful argument to make. In the spirit of Madiba, let us redouble our efforts to bring about climate justice.