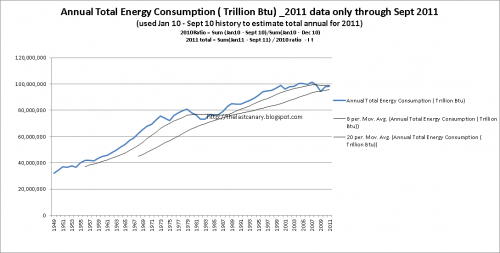 Well, I’m out of the analyst’s cave. I have sent off the report I was working on, looked out the window and noticed it was July. How did that happen?

I also noticed that the U.S. Department of Energy has released their Annual Energy Outlook for 2012 with projections for 2035.

And I’m numbered out. I have photovoltaic CAGR percentages on the brain and the DOE’s report looks like a soup of numbers right now.  I need a bit of R&R.

When the appropriate part of my brain starts working again I will pick those apart a bit. For now, though, I’ll just note that they are essentially saying that the U.S. of A. will hit the Green Trifecta.

They are saying that the past ten years of energy consumption are a picture of what will happen over the next 25: They are predicting that the dip in per capita energy use experienced during this recession will be continued no matter what happens to the economy for the next 25 years:

And the same chart shows an acceleration of energy efficiency, as we get more bucks for our bang, almost literally.

We’ll look closely at how they expect to get there, but expect to spend some time evaluating this quote: “In the AEO2012 Reference case, residential sector energy intensity, defined as average energy use per household per year, declines by 19.8 percent, to 81.9 million Btu per year in 2035 (Figure 74). Total delivered energy use in the residential sector remains relatively constant from 2010 to 2035, but a 27.5-percent growth in the number of households reduces the average energy intensity of each household. Most residential end-use services become less energy-intensive, with space heating accounting for more than one-half of the decrease. Population shifts to warmer and drier climates also contribute to a reduction in demand for space heating.”

It’s good to be back! Wow–it’s summer!