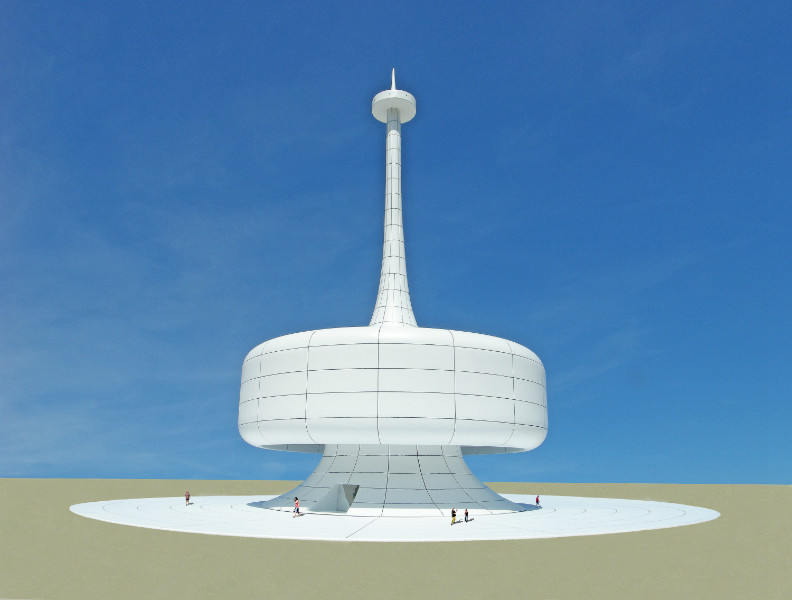 About 35 years ago Michael Jantzen designed the concept for a windowless revolving restaurant that would replace its windows with large video screens. This was of course before the Internet, HDTV, etc. The basic idea was that instead of building a structure high enough to place a restaurant on top (in order to get a great view) he would mount real time video cameras onto the top of a tall support tower built into the center of the restaurant, which was to be constructed on the ground level. The real time view seen by the cameras on top of the tower would be sent down into the perimeter of the restaurant. The cameras would be slowly rotating so that the customers inside of the restaurant would feel as though the entire building was rotating. Now real time images could be sent from anywhere in the world via the Internet from separate camera tower installations so that each day the restaurant could have a different view and menu to match. This idea naturally lead to thinking about the placement of real time TV views from around the world into other venues including peoples homes.

Michael Jantzen’s updated design would incorporate the latest OLED curved screen TV technology as window replacements, and transport real time images from around the world through the Internet. Symbolically, his up-dated design refers graphically to the latitude and longitude lines on a map of the globe. Conceptually these lines encircle a giant architectural device that has the ability to pull images in from around the world and display them in real time to the customers of the Revolving TV Restaurant. Many other kinds of images could also be displayed on the OLED windows that are prerecorded, and/or animated. Customers enter the structure at its base through a mirrored door that leads to a bar and lounge area. When the customers are ready to dine, they enter an elevator at the center of the space, which appears to be traveling up through many levels of the structure. This is done to create the illusion that the Revolving TV Restaurant is actually located high above the surround landscape. A potential eco-friendly addition to the restaurant would be a large solar power ring around the restaurant (that could power much of the complex) with retail facilities situated below. As the complex expands, additional solar power rings and retail facilities could be added.

This work was part of Michael’s personal ongoing research into ways in which virtual reality could be used to supplement and/or replace the need to build physical structures, which consume a large portion of the earth’s resources.