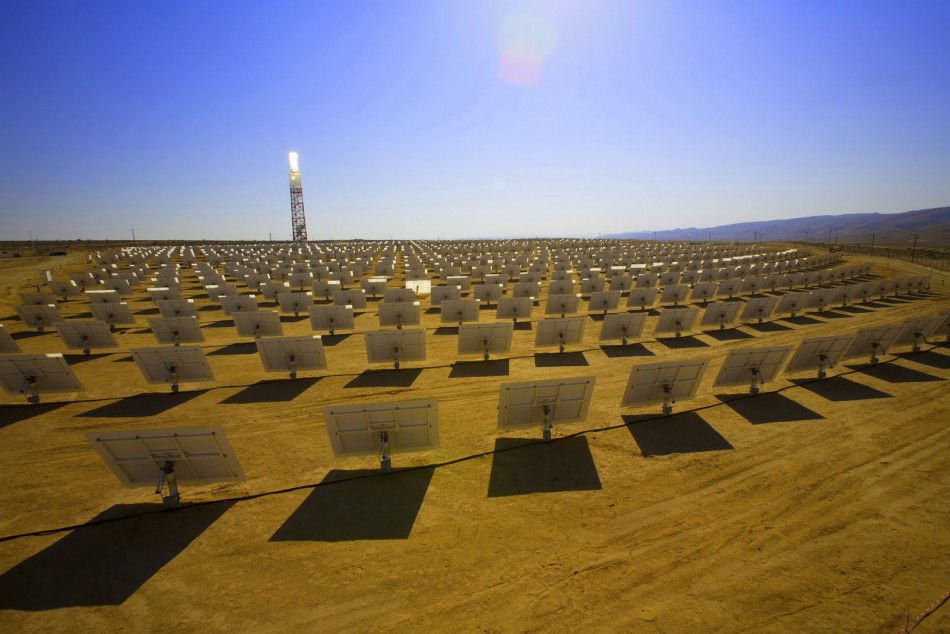 Solar is booming in the sunshine state. Installations grew by 76% in 2012 and in the next few weeks, the largest solar power plant in the world will open in California’s Mojave Desert. The electricity generated by this mirror-intensified solar complex is enough to serve more than 140,000 homes during the peak hours of the day.

Stretching across 3,500 acres, the Ivanpah solar power plant is unique. Unlike other photovoltaic systems, this solar thermal plant utilizes CSP technology. 170,000 mirrors set on trackers capture and direct sunlight toward three towers filled with water, raising temperatures to more than 1,000 degrees Fahrenheit. The water turns to steam, spinning turbines that generate electricity. The electrical power produced is delivered to utility companies that then distribute the electricity throughout the state.

BrightSource Energy, the company overseeing construction, claims the use of sunlight, instead of fossil fuels, will reduce CO2 emissions by more than 400,000 tons per year. A highly efficient location, the desert region receives reliable sunlight 330 to 350 days per year, according to the Smithsonian.

Utility-scale solar power generation projects such as  Brightsource’s 277-MW Ivanpah in California, Areva’s 250-MW project in Rajasthan, India and many others are all set to come online by the end of the year. And none of these will be using photovoltaic technology.

This marks a dramatic change from 2010, when the price of PV solar panels were at an all time low and many companies were choosing photovoltaic technology over CSP. NRG Solar, a leading developer in the solar industry, is one of these companies. Currently in the process of constructing eleven large-scale photovoltaic facilities in California and the surround desert regions, NRG Solar just cut the ribbon on its ninth facility.

While both CSP and photovaltaic facilities are expected to lower the cost of energy for homeowners, it will be interesting to see which solar technology fares better at a utility scale.