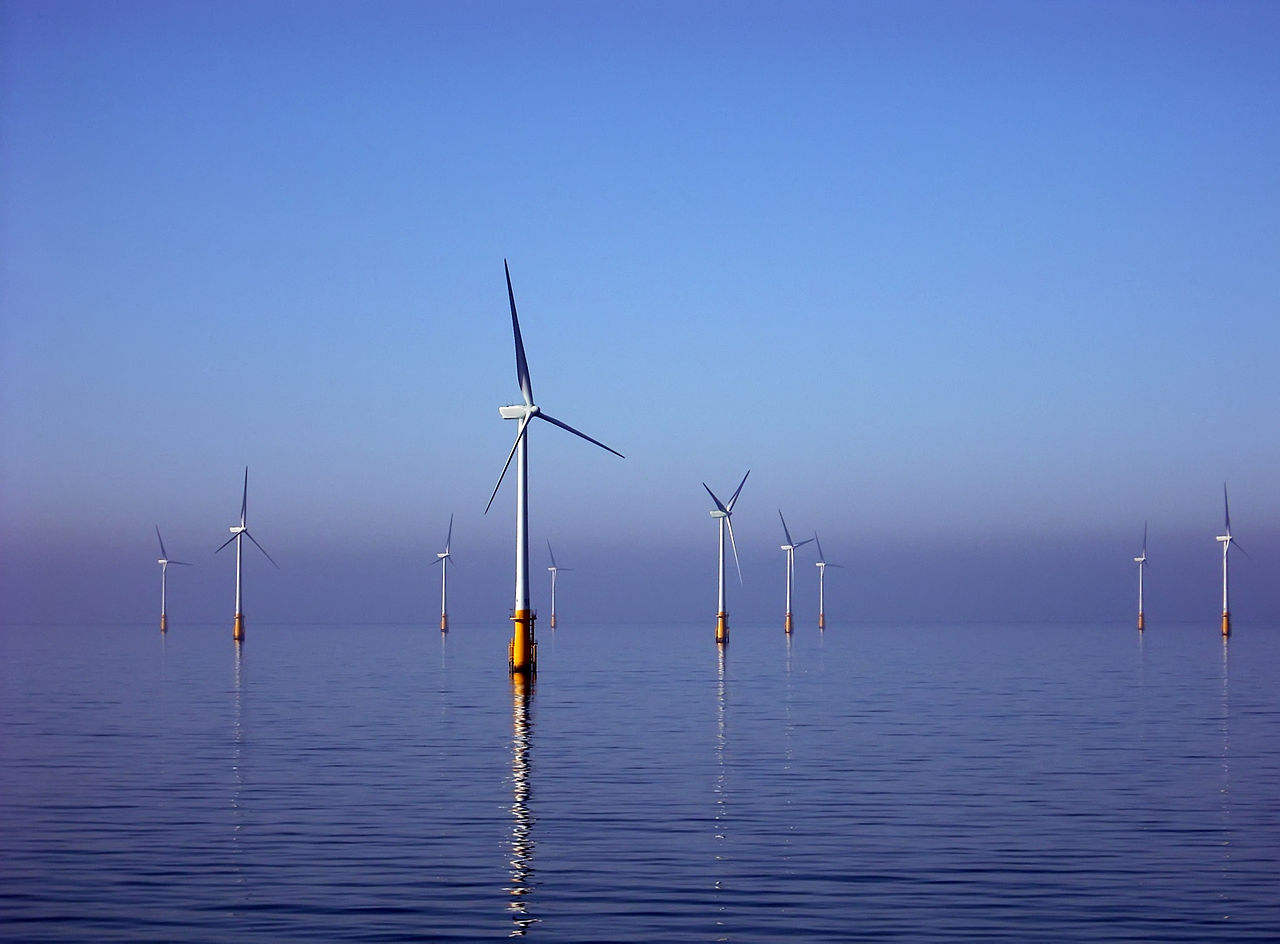 With modern energy concerns, there has been a lot of talk about solar and electric power, but how about wind farms? Wind is a great producer of energy, and every country has it, although certain places are better than others and wind farms in the windiest places produce much more energy. The largest wind farms are typically built in the places that have the most wind, but can also afford to construct the facilities.

With offshore wind farms expanding at a record pace, they are getting larger and larger, producing more energy than ever before. The United Kingdom currently has the largest wind farm, and new projects will power more than seven million homes at a cost that is lower-than-expected. The government says this represents a breakthrough generating electricity without subsidy. Let’s take a look at the biggest wind farms in the world and how much energy they produce.

Wind Power in the United Kingdom

The United Kingdom dominates the field of wind power, and not because they have a lot of wind. They have built many of the top ten biggest facilities in the world for producing this kind of power. With renewables producing nearly a third of the energy in the UK, half of it is generated from wind energy. This accounts for 17 percent of the whole country’s power supply. By the end of 2016, the UK had more than 10,000 wind turbines with a total installed capacity of 21.5 gigawatts. Offshore and onshore facilities in the country are central to the shift to an energy system that is fit for the future.

At a capacity of 402 MW, the Veja Mate wind farm in Germany is the tenth largest wind farm in the world. Commission began in 2017, and it includes 67 Siemens turbines. This is an offshore wind farm that is located in the German Bight of the North Sea about 95 kilometres northwest of Bokrum. It is worth 2 billion USD.

Tied with the Veja Mate wind farm is the Dudgeon in the United Kingdom. This offshore facility is 32 km north of Cromer off the coast of Norfolk. Located in the North Sea of England, the farm also has 67 Siemens turbines and has a capacity of 402 MW as well. It seems that the only reason the Dudgeon farm makes it to number nine on the list is the amount of wind that uses to produce energy.

A lot has changed since then. The Horns Rev 3 has more than twice that capacity and is not close to being the number one wind farm in the world. According to the experts at the website MoneyPug, which is commonly used as an energy comparison site, the third phase is expected to raise wind power in Denmark above the current 29 percent of annual electricity production.

The United Kingdom’s second wind farm on the list, the Greater Gabbard offshore facility is on sandbanks 23 kilometres off the coast of Suffolk in England. It has a capacity of 504 MW, a significant jump up from the Horns Rev 3. It has more than twice the amount of Siemens turbines, and it uses the SWT-2.6-107 instead of the SWT-6.0-154 that both the Veja Mate and Dudgeon wind farms use. This large facility went operational in 2012, a while before for many of the top ten wind farms. An extension of 336 MW was commissioned in 2018. It is now worth 1.5 million pounds. It has had a few incidents on its site, but Greater Gabbard remains one of the largest facilities in the world.

Another wind farm is the offshore facility Race Bank, which has 573 MW capacity. It is located 27 km north of Blakeney Point off the coast of Norfolk and 28 KM east of Chapel St. Leonard’s off the Lincolnshire coast in the North Sea. Commissioned in 2018, this facility has 91 Siemens turbines. It may not have nearly as many turbines as the Greater Gabbard farm, but it has a larger capacity.

Just above the offshore farm between the coasts of Norfolk and Lincolnshire, the Gwynt y Môr offshore wind farm produces 576 megawatts. It is off the coast of North Wales and is currently the fifth-largest operating wind farm in the world. It has 160 Siemens turbines that were commissioned in 2015. The turbines have 150 metres of tip height above the mean sea level. The farm has an estimated value of 2 billion Euros, 1.2 of which were spent on the turbines and electrical connections.

Coming in at a capacity of 582 MW, Germany’s Gode Windfarm was commissioned in 2017. With only 91 wind turbines on the coast of north-west Norderney in the German sector of the North Sea, Gode phases one and two are operational, and Gode three is currently being developed. There was a lot of planning put into this facility, and it seems as though the third iteration has been planned for a while. 2.2 billion Euros were invested in Gode’s one and two. Electricity from the wind farm is fixed for the next decade.

Landing third on the list, the Gemini Wind Farm in the Netherlands has an MW capacity of 600. Right off the coast of the country, construction began in 2015 and the facility was commissioned in 2017. It is the third-largest wind farm facility on the planet. Consisting of two parts, the first 75 turbines are located in the north of Ameland and the second 75 is located 55 kilometres north of Chiermonnikoog. These 150 Siemends SWT-4.0 each have a capacity of 4 MW and has continued to produce a lot of energy since 2017.

The 630 MW-capacity wind farm called the London Array has 175 Siemens wind turbines. This offshore facility is located 20 kilometres off the Kent Coast in the outer Thamese Estuary. The construction of the project’s first phase began in March of 2011 and was completed in 2013 while the second phase was refused in 2014 due to concerns that it would impact the sea birds of the area. The second-largest wind energy producer in the world, one can only imagine how much more power it could produce if the second phase of the project was approved. So close to London, it proves that you don’t need to be in the middle of the ocean to produce a lot of power.

Finally, the number one largest wind farm in the world is the Walney Expansion in the United Kingdom. With a capacity of 659 MW, this offshore facility has the ability to produce more power than any other wind farm. It has 40 MHI-Vesta turbines and 47 Siemens Gamesa turbines. Commissioned in 2018, it hasn’t been the largest wind farm for long. The farm’s tactic was to combine a group of wind farms nine miles west of Waleny Island off the coast of Cumbris in the Irish Sea. Walney Phase one and two began first, then the Walney Extension made it the largest facility to produce wind energy offshore.

The first phases have 51 turbines each, with a nameplate capacity of 367 MW. It was the largest wind farm until September 2012 and regained the title after the expansion in 2018. The first two phases were expected to generate about 1,300 GW a year with a load factor of 43 percent. The Extension opened in September 2018, with 87 turbines capable of producing the largest amount of megawatts in the world.

With wind farming booming and becoming an increasingly important way to produce power, there are many more wind farms under construction. Wind turbines are getting bigger and facilities are moving further out to sea. Floating turbines are opening up new possibilities. Land-based wind facilities are one of the cheapest methods to produce energy, but they are never quite as effective as the ones offshore. Farms offshore are still expensive, but this hasn’t stopped European countries from building them.

The Netherlands is set to have the second-largest wind farm in the world commissioned soon, and there is no reason that other continents cannot make the list of largest wind farm facilities. While the rest of the world lags behind European wind farms, this provides hope that when other parts of the world get into the business, there will be a lot more energy to go around. The United States is investing more in wind farm power and will likely commission some of the largest farms in the world soon.

The Future of Wind Power

There are many concerns about the way that we’ve producing power for the last few hundred years. They have not been clean, renewable, or sustainable. Now, as the world shifts to more effective and beneficial methods of producing power, the number of wind farms will increase drastically. The largest wind farms in the world might lose their place on the list very soon. Other farms on and off the shores of our land are being constructed as we speak to produce renewable power that we desperately need.

However you feel about the political situation surrounding renewable energy, the fact that methods like wind are cheaper and more sustainable than nuclear, coal, and natural gas is obvious. When we, as a planet, switch to renewable energy we can produce more of it in a way that is better for ourselves and the planet.

All of the top ten wind farms are in Europe, and it is not because they are the windiest seas. It is because they have made the effort and taken the time to build these large facilities that are not necessarily cheap. When the world has the ability or interest to follow suit, we will be able to produce a lot more wind energy to power our modern, racing lives. China is the only country outside of Europe that comes close to producing as much wind power as the European countries, but its largest facility only has a capacity of 302 MW. China does a very good job of anticipating the future and even they lag behind.

The problems concerning energy will not go away. We need to deal with them in a proper way in order to produce enough energy that is sustainable. While it is great that these ten wind farms exist and produce as much power as they do, we need more wind farms on and offshores that are larger and produce more energy.

When we produce more wind power, it will become cheaper to produce because the market will demand it. Until then we wait for larger wind farms that can produce more energy. As technology facilitates this, we will finally see that wind and other renewable energy sources are the way to go. If you are in the industry, it would be smart to build wind farms in your country.

If you can get ahead of the need, you will be able to make a lot of money building facilities that satisfy the need for clean power that is reasonably priced and good for the planet. We will get there, but it just takes time. Why wait? Take matters into your own hands and create a lucrative business in the process. We will all benefit from it and you will likely become very wealthy from anticipating the future in your country by building much-needed wind facilities.

Ryan is a journalist, writer, and blogger. He has written for Paste Magazine, New Noise Magazine, OC Weekly, Deadline News, The Slovenia Times, and more.