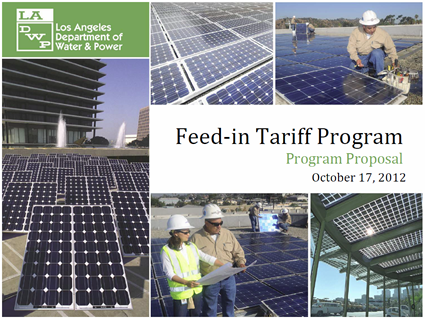 The Los Angeles Department of Water & Power (LADWP) has released an update on the status of its efforts to develop a Feed-in Tariff program (FiT) which provides some clarity while leaving many questions unanswered.  Here is our take on what has been revealed so far.

As we have reported before, LADWP has taken a somewhat tortuous path on its way to developing a FiT – most notably by rolling out a pilot/demonstration program that did not provide for an up-front, fixed price for energy – generally considered a necessary element of a FiT.  Instead, the pilot program was really much more of a reverse auction used by LADWP to provide “price discovery” for different sized projects throughout the LA area.

Although DWP has yet to disclose the pricing details from the pilot (those details are due out next month), it seems that the response was somewhat tepid: only 26 proposals were submitted (for a pilot program that was supposed to account for 10 MW of capacity) of which only 17 (65%) made it through the initial screening and just 15 had interconnection studies performed.  Given that final project costs cannot be known until the results of the interconnection study are provided, it seems highly likely that some of these 15 will no longer pencil out and will fall away.  Such are the joys of being a “price discovery” guinea pig.

Still, DWP believes it has learned something from the process, including the following bullet points (DWP text in bold italics):

Having concluded the bidding phase of its pilot program, LADWP’s full-scale FiT program of 150MW is set to debut by the end of this year.  In an apparent effort to satisfy both large and small developers, the program as described will be divide evenly into to pieces: 75MW in the so-called “Individual Project Group” with another 75 MW allocated to the “Bundled Project Group” on private property (as well as another 150MW of utility-scale projects on LADWP property).

The very large allocation associated with the Bundled Project Group is really not a FiT at all.  Rather, DWP is planning on putting out an RFP for the entire allocation and will select three vendors to supply it.  Needless to say, this means only the largest entities will be able to participate in this program.

Of far greater interest is the Individual Project Group since that is closer to being a true FiT program, albeit with some wrinkles.  Like a true FiT, this appears to an “open to all” program with set prices for energy from the outset.  The 75MW total allocation is to be subscribed in 15 MW tranches, the first of which is set for next January, with additional tranches to be released every six months thereafter.  DWP is suggesting that its set price will likely start out at $0.15/kWh for the first tranche and then step down by half a cent with each subsequent tranche.

However, DWP’s proposal is a bit confusing in that they say that any unclaimed allocation from one tranche will not be carried over into the next – which means, assuming we understand this correctly, that the 75MWs assigned to this program may never be allocated, let alone built.  On the other hand, DWP says that the price will only decline when the 15MW associated with a price point has been allocated.  Which means that tranche sizes are strictly tied to the calendar whereas prices are not.  Somehow this seems backward – if I am deciding whether to put forward a proposal, the most important question is the price that my proposal will receive.  Tying that to the calendar gives me certainty.  On the other hand, the total amount of capacity to be installed should not diminish just because developers are not inline to request an allocation within a given window in time.  We have asked DWP to clarify and we will update this post if/when we get a response.

Perhaps the most perplexing wrinkle is the introduction of “Time-of-Delivery” (TOD) multipliers which modify the amount paid based on the day of the year (high or low season, i.e., June-September or not) and time of day.  Here are the TOD multipliers being proposed by DWP:

Energy produced in the summer between 1 and 5 p.m. receives a substantial bonus, but roughly a third of the energy produced is subject to a 50% penalty.  Moreover, this substantially increases the complexity of the modeling process.  If all energy produced were priced the same, then the CSI calculator would be sufficient to estimate system earnings in Year 1.  You could then apply a depreciation factor (to allow for system degradation over time) to arrive at the earnings of the system on a year by year basis.

Instead, you need to model the array’s output on an hourly basis over the course of the year.  (Fortunately, NREL’s PVWatts version 1 calculator will provide such an output that can be imported into Excel.)  An appropriately coded function will then allow you apply DWP’s TOD multipliers to the hour-by-hour output to calculate the estimated earnings from the system in Year 1.  Phew.  Seems like a lot of added work for what is supposed to be an open to all process.  (We have confirmed with DWP that the TOD multipliers apply to both the BPG – where it makes sense – and the IPG – where it is far less appropriate.)

Given the emphasis on summertime production, we thought it would be interesting to see how different azimuth angles would effect the year earnings of the system.  We ran PVWatts on three different configurations of the same 100 kW (nameplate system) at 180, 235 and 270 degrees azimuth.  (In each case we assumed an unshaded site and a panel tilt of ten degrees.)  We also calculated what the earnings would be under a straight, $0.15/kWh without the TOD multipliers.  Here are our results:

The three top lines reflect the TOD multiplier effect – certainly during those summer months the systems are all earning more money than their flat-rate brethren.  The (perhaps surprising) loser here is the 270 degree azimuth.  In the peak summer months it is matched almost exactly by the 235 degree system, but loses out to it (and to the 180 degree system) the rest of the year.  Overall, the 235 degree system earns the most – about $24,416 in Year 1 by our estimation – about $170 more than the 180 degree system and nearly $800 more than the 270 degree system.  (Is there a “sweeter” spot out there to be found – perhaps, but that determination is left to the student.)  Overall, the earnings of the TOD based systems are roughly 9% higher than the corresponding flat-rate systems.

Which begs the question – why not simply raise the offered rate by 9% or so and avoid this complexity?  After all, this is supposed to be a simple program that offers “price certainty” so why all of these additional hoops?  Raising the initial rate to $0.165/kWh would cost the same amount of money and produce pretty much the identical amount of energy over time – particularly if DWP simply issued guidelines for acceptable system designs.  The TOD multipliers should be relegated to the BPG projects where that level of complexity is par for the course and the participants will have the staff to properly predict their earnings no matter how complicated the pricing regime.

The most perplexing element of DWP’s proposal is their claim regarding anticipated Internal Rates of Return (IRR) for projects completed under the FiT’s IPG.  Like lots of solar companies, we have developed our own model for determining the client’s return on investment based on the calculation of the project’s cash flow IRR.  DWP published a chart purporting to show where different IRR values land between the cost per Watt versus payment per kilowatt hour graph.  Here’s what they are projecting:

Take that optimal 100kW system we were looking at before – assume it costs $4.50/Watt which works out to $450,000.  That system will earn roughly $24,400 in Year 1, subject to a degradation of about 0.9%/year.  It qualifies for a 30% ITC tax credit from the federal government and is subject to accelerated depreciation for both the state and the feds.  And that’s it on the plus side (there is no rebate since this is a FiT system).  On the minus side, in addition to the annual reduction is system output, there are also O&M costs associated with this system which could well reach 1% of the system cost per year.  Put that all together and you end up with an IRR of 7.3% – not awful, but a long way away from 12%!  Again, we have requested clarification from DWP and we will update this if/when we hear from them.  (Of course, if you think I’ve overlooked something crucial, please let me know in the comments.)

To Play, or Not to Play

So what can we conclude from all of this?  LADWP is moving toward a FiT, even if the actual open-to-all FiT program is limited to just 75Mw.  However, questions of complexity in the application process (including the need for interconnection studies) and the pricing structure combined with some rose-tinted profitability projections cast doubt on just how desirable this program will be.  LADWP is actively soliciting comments on their proposal – please consider this one long comment – and hopefully they will be open to making changes to address the concerns of the stakeholders who have been pushing for this program for a very long time.