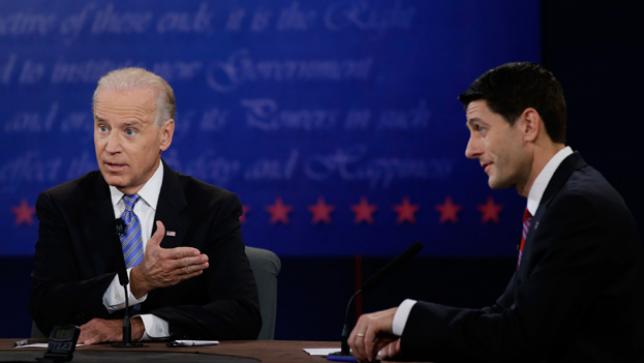 Energy didn’t get much play in the debate. But when the topic did come up, it gave Biden a strong opportunity to hit back on Ryan’s claims about the clean energy stimulus. After Ryan called the stimulus “corporate welfare” for clean energy companies, Biden reminded the audience that his opponent secured more than $20 million in stimulus grants for energy efficiency and transportation companies in his Wisconsin district in 2009 — even while calling it “wasteful” in public:

BIDEN: And I love my friend here. I — I’m not allowed to show letters but go on our website, he sent me two letters saying, “By the way, can you send me some stimulus money for companies here in the state of Wisconsin?” We sent millions of dollars. You know…

RADDATZ: You did ask for stimulus money, correct?

BIDEN: Sure he did. By the way…

(CROSSTALK) BIDEN: I love that. I love that. This was such a bad program and he writes me a letter saying — writes the Department of Energy a letter saying, “The reason we need this stimulus, it will create growth and jobs.” His words. And now he’s sitting here looking at me.

After Ryan’s letters requesting the funds were released, he told a local news station in an interview that “I never asked for stimulus.” A day later, he walked the statement back.

Ryan was not alone, however. He joined at least 62 Congressional Republicans who actively lobbied the government for loan guarantees and grants for clean energy companies in their districts — even while many of them publicly railed against the stimulus program that provided a boost to local companies and organizations around the country.

According to the Department of Energy, the loan guarantee programs created or saved over 60,000 jobs and the 1603 grant program supported up to 75,000 jobs, stimulating tens of billions of dollars in private-sector activity.

Biden also hit back against Ryan’s claims that the $90 billion invested through the stimulus for clean energy, public transportation, clean coal, and energy efficiency resulted in criminal activity — a completely false charge that has been backed up by a year of Congressional investigations.

RYAN: Look at just the $90 billion in stimulus. The vice president was in charge of overseeing this. $90 billion in green pork to campaign contributors and special interest groups. There are just at the Department of Energy over 100 criminal investigations that have been launched into just how stimulus…

RYAN: This is the — this is the inspector general.

BIDEN: Months and months. They found no evidence of cronyism. And by the way, that program, again, investigated. What the Congress said was it was a model. Less than four-tenths of 1 percent waste or fraud in the program.

And all this talk about cronyism. They investigated and investigated, did not find one single piece of evidence. I wish he would just tell — be a little more candid.

Ryan then threw in one last punch at the end of the exchange: “Was it a good idea to spend taxpayer dollars on electric cars in Finland, or on windmills in China?” he asked.

This might have been a little jab, but it was loaded with some pretty big inaccuracies.

The first “electric cars in Finland” comment is based upon a made up story pushed by Fox News and conservative bloggers that a Department of Energy loan guarantee to Fisker Automotive was being used to build cars overseas. In fact, all of the money used through the loan guarantee went toward building a U.S. manufacturing facility. There were some jobs created in Finland during final assembly of electric vehicles, but that was announced up front in 2009 when the loan guarantee was issued. According to the Department of Energy, all of the money set aside for Fisker’s next-generation vehicle manufacturing was issued for American operations.

Ryan’s “windmills in China” comment is based on a 2010 Washington Times piece that cited an investigative story from American University finding stimulus dollars going to some foreign companies developing projects within the U.S. The piece raised questions about how much foreign product was being used to build wind farms in the U.S. “It should be noted there were no farms that we could find that used turbines entirely built in China, so we can’t say for sure how much of this stimulus money went to create jobs in China. Some money definitely did, but it is safe to say more money went to creating jobs in the U.S. and Europe.”

The driver of this issue was the lack of a sophisticated supply chain for wind components and turbines in the U.S. This is exactly what the stimulus package was designed to do — to encourage more development activity, which would in turn spur more domestic manufacturing. And it worked.

But facts don’t seem to matter during this campaign. Even though we’ve doubled wind manufacturing in this country and doubled production of renewable electricity, the industry is still being used as an attack punch line.

As Biden said in last night’s debate, “this is a bunch of stuff!”