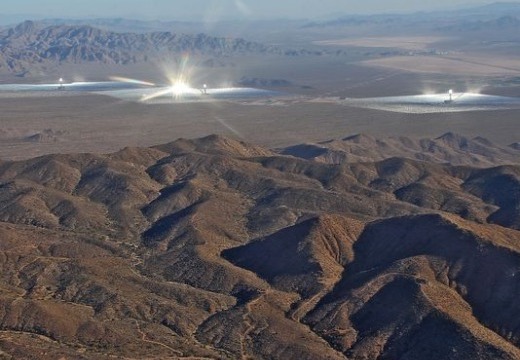 Seen from the air, the Ivanpah solar project is both breathtaking and terrifying. In a valley just north of Interstate 15, near the Nevada border, close to 350,000 mirrors reflect sunlight toward three massive towers, which glow impossibly bright as they convert that sunlight into energy.

Ivanpah is the largest concentrated solar plant in the world. Unlike traditional solar photovoltaic panels — which convert sunlight directly into electricity — concentrated solar technology uses sunlight to heat water or another liquid, ultimately creating steam that can be used to turn turbines and generate electricity.

Concentrated solar power is much more expensive than solar panels and wind turbines, but advocates say it has a major advantage over those technologies, particularly in California: the ability to store energy. As the state races to adopt renewable energy, one of its biggest challenges will be intermittency — the fact that most solar and wind plants only produce power when the sun is shining, or when the wind is blowing.