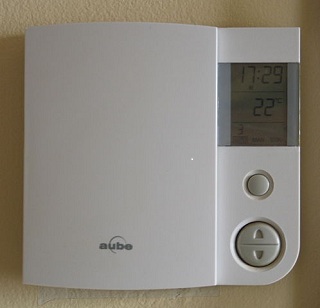 I just got back from Crestron Masters programming training where I learned about all of their new products coming out and currently available.

Crestron got its start doing programmable controllers and touch panels for the AV industry. In the process they created some very versatile controllers that allow for control over some very disparate and unrelated pieces of equipment. While controlling projectors/displays, screens, video switchers and audio equipment was their focus in the beginning, that rapidly grew into controlling lighting and HVAC also which then gave them control of over whole building lighting and HVAC systems. There is also interfacing with entry control and security systems.

A couple of the things that caught my interest were the fact that these new products are now BACnet compatible. BACnet is a communication standard, which allows communication with virtually any system in a building. Wikipedia has a nice description of BACnet and all that it can monitor and control for those who are unfamiliar as I was before this week. It allows gathering of information and also control over any system in the building. It is very powerful. Crestron also has a power monitoring system of it’s own that gives the ability to monitor the power usage of the branch out of any circuit breaker in a breaker box through the use of current sensors. I suppose one could install these sensors anywhere they wanted to monitor any power used anywhere.

The second thing that caught my interest was a piece of Crestron software called FusionEM (Energy Management). This is an expansion of their Roomview software which allowed monitoring and control over the items being controlled buy a processor in individual rooms from a central location. One could tell at a glance the status of projectors, lights, HVAC and other equipment in all rooms with controllers installed and turn them on or off or otherwise adjust them as required as well as schedule events such as shutting things down at a given time to save power and equally important, projector lamp life. This system also allowed polling of devices such as projectors so that if they were removed in an unauthorized fashion an email would be sent to anywhere one desired like perhaps the security desk.
FusionEM allows the monitoring and gathering of information from the BACnet system to track energy usage and record it over a long period of time throughout an entire building or complex of buildings. It also allows scheduling to turn lights and HVAC on or off as needed or adjust as required to save energy. Event driven control can also be exerted such as turning on lights and HVAC when rooms are scheduled to be used or occupancy sensors indicate an occupied state or shutting them off some period of time after they are vacated or making sure things are off after normal working hours. Events can be scheduled according to an astronomical clock or to take advantage of off peak power periods as well.

Currently FusionEM only monitors electricity usage but shortly it will be able to collect information on natural gas and oil usage as well as water usage.
I found this all to be highly impressive and there is so much more that I have not related here. I now have the technology and ability to monitor and control any system in any building remotely or through scheduling to achieve maximum efficiency from anywhere in the galaxy that has access to our internet.

Previous ArticleSolar Decathlon 2013: Bigger and Better Than EverNext ArticleGrid Parity in the U.S: There’s A Map for That