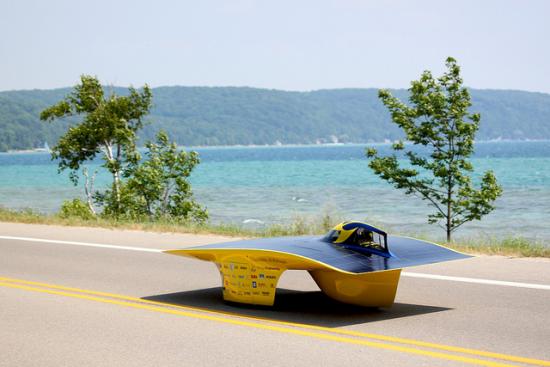 The World Solar Challenge is a competition that pits university teams from around the world against each other as they design, build and race solar powered cars across Australia. With the 2013 event coming up in October we decided to talk to Ethan Lardner, the Global Operations Director of the University of Michigan’s 2011 Team, to gain some insight on what goes into putting together a world class solar car.

Congratulations on your third place finish in 2011, it must’ve been a great experience. Can you tell me a bit about the World Solar Challenge?

The World Solar Challenge is a solar car race that consists of 50 teams from around the world racing on public roads for 3021 km. The race takes place in Australia and started in 1987.

For 2013, the race is divided into different classes: the Challenger class, which is the main event and has the highest performing cars, the Cruiser class which is designed to create more  practical cars, and the Adventure class, which allows cars from previous competitions to compete.

Tell me a bit about the 2011 car Quantum–it looks more like a spaceship than a car. How does its design help it perform on the race course?

The design process is based on two main things, aerodynamics and solar cell area. You are allowed to have either 6 square meters of silicon cells or 3 square meters of gallium arsenide cells. The first step is determining which one of these will provide the most array power based on actual efficiency.

The second main area of focus is aerodynamics. To increase the aerodynamics, we put fairings around all three wheels. The aerodynamics around spinning wheels is extremely tough. Currently, Honda uses fairings to keep wind off the wheels in some of its production vehicles. It is interesting you mention that it looks like a spaceship because at auto shows they tell us it looks more like a boat than a car.

What was your role in the development of this car?

I joined the team as a freshman in the logistical division. Our division’s main role is to ship the semi and solar car to Australia. Later I joined the mechanical division working on the braking systems.

During my final year in 2011, I was in charge of the logistical division and was part of the race committee. The race committee makes decisions for the team and is comprised of members from all divisions: strategy, logistical, engineering, and race leadership.

What was the most difficult obstacle you had to overcome in your role?

Our biggest failure in 2011 was actually in shipping; someone told us not to ship the battery in the car. This is because the battery looked similar to a bomb. We then had to ship it separately which turned into a huge hassle and the battery almost wasn’t delivered on time. I was in Australia at the time and was there early to set everything up. It is difficult to get get things to clear customs, Australia is an island so they can be very picky about what comes and goes.

The car is also completely custom so it has to be handled specially. The car isn’t particularly fragile but you have to know how to lift it and move it, and it is like nothing most people have ever seen before.

Were there any times or situations that were touch and go during the race or during the construction of the car?

One of our biggest issues was that in 2011, we designed the car 200 pounds lighter than the year before. We optimized load cases for strength and the result was a larger side area. The desert of Australia was windy, especially compared to Michigan that has roads sheltered by trees.

The wind in the desert combined with the new lower weight and larger side area made the car unstable at high speeds on the interstate. We were constantly trying to shift weight around to make the car stable and lower its center of gravity.

What made the winners more successful, was it luck and variance, or better cars and drivers?

The two major components to success are money and information. The primary difference between us and the Japanese or Dutch is that they have faculty advisors on the car that are much more involved and stay there for years.

Everything about University of Michigan’s program is primarily student run, and every two years we have a different team and are almost starting from scratch. We try to pass on as much information as possible, but because there is such high turnover in terms of team members we are missing out on a lot of information and expertise from past years that could be useful.

With the success of electric vehicles like Tesla, do you see solar playing a role in the consumer car market?

I think It could play a minor role but we won’t see purely solar powered cars for some time. Our solar array alone costs more than $100,000 and puts out a little more energy than a hair dryer. This is nowhere near the power used by a Tesla, for instance, which uses 350 kW. However, there is a new Honda vehicle that has solar on the roof of a car which partially powers the AC. That sort of thing is the extent that I can see solar playing a role in the vehicles themselves. However, it does make sense for someone to have solar on their house and charge their electric car in their garage.

Thanks for taking some time to interview. Good luck in your future endeavors.