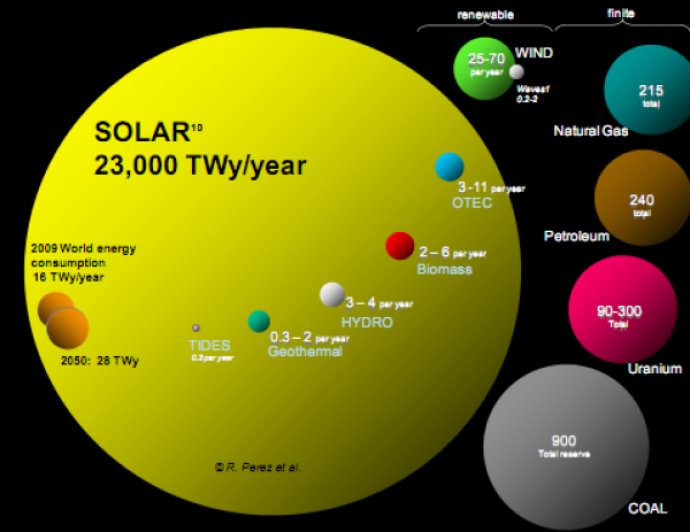 Human beings use different kinds of energy for different purposes all over the planet every hour of the day and night.

About one-third of the human-produced energy is used for transportation which requires energy which is easily stored and ready for use at any time – the gasoline in your car gas tank, or your Toyota Prius battery for example.

Other energy is used to produce electricity to power our homes, businesses and industry.

While still other kinds of energy are burned to produce thermal energy as is likely the case in many home furnaces.

To help understand the vastly complicated energy picture on the Earth it helps to have a measurement of energy equivalence to put things into a comparable form.

The terawatt year was constructed for this very purpose. Basically, 1 terawatt-year, (or TWy) is equal to 8766 terawatt hours of energy.

Others refer to 1 terawatt-year as 29.9 quad for their particular calculations.

For our purposes, we will use the Terawatt year.

It is important to state (no matter how that energy was collected) that the total energy consumption by humans on the Earth in 2009, reached 16 Terawatt years.

It is estimated (no matter how that energy was collected) that the total energy consumption by humans on the Earth in 2050, will reach 28 Terawatt years.

What energy shall we use between now and 2050?

That’s really the question, isn’t it? Our choices are laid out before us just like at the shoe store – all we have to do is choose!

It turns out that two main kinds of energy are available. Non-renewable and renewable.

Again, considering our 2009 energy consumption total of 16 Terawatts per year and slowly climbing each decade, we see that the non-renewable energy sources (that is, sources of energy which will eventually be exhausted) totals 1445 Terawatts. That’s the total supply of energy from those finite sources, which is equal to 90.3 years of energy at 2009 consumption rates. Once consumed, these non-renewable energy sources will be gone forever.

There are some who claim that there are actually 1655 Terawatts of total energy available. This would allow for 103.44 years of energy consumption at 2009 usage rates. Again, once consumed, these non-renewable energy sources will be completely exhausted.

There are claims of 23095.7 Terawatts per year available for collection and use by humans. That’s 1443 times more than we used in 2009. The 23095.7 number if more accurate is still a unit of energy that would be available every year until the sun burns out, the ocean’s freeze and the wind stops blowing, etc..

What’s the difference some might ask? Why worry? Either way and even in the worst-case scenario, we are covered for about 90 years at 2009 energy consumption rates.

One, the actual cost per energy unit. Costs for renewable energy have been falling dramatically so far this decade — and it looks set to continue. In fact, some kinds of renewable energy are already reaching price parity with coal and large-scale nuclear power.

Two, the costs associated with certain kinds of energy use must be factored in, just as China does, where 410,000 people per year die from pollution of the air, water and soil, every year.

The ball is in our court.