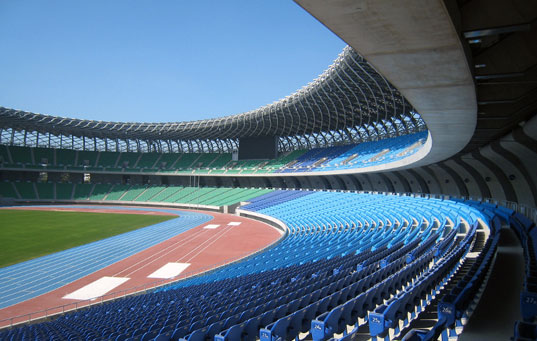 The multi-billion dollar American sports industry may not be the most polluting industry, but it is among the most visible.

With over 60 percent of Americans identifying themselves as sports fans, the greening of the sporting world could serve as model for a wide swath of people.

The White House seems to agree. Last week, government officials teamed up with environmental groups and sporting professionals to promote sustainability in sports. At an event held at the White House, representatives from Major League Baseball, the National Basketball Association, the National Hockey League, and the National Football League, including members of multiple teams, participated in a sports and sustainability discussion. The event was conducted in collaboration with the National Resources Defense Council.

The discussion comes as more teams and leagues are thinking seriously about how to reduce energy use and waste, while also building their brands.

Earlier this month, Major League Baseball held its All Star game in Kansas City. In preparation for the event, the MLB purchased renewable energy offset credits from the Bonneville Environmental Foundation for the 120,000 KWh of electricity it was going to use during All Star weekend festivities. It also purchased credits for the 600,000 gallons of water it planed to use.

Climate Progress has criticized the use of renewable energy credits that don’t spur new development of clean energy. However, many teams are doing a better job than just relying simply on offsets.

At the All Star game, recycling was actively promoted throughout the stadium on game day, with bins and a team of volunteers collecting recyclable materials from fans. Recycled and “environmentally-friendly” materials were used in the printing of tickets, programs, and bathroom papers. Organic waste collected during the game was separated and sent to compost and signs promoting green initiatives were hung all over the park.

Well before the game, the Kansas City Royals installed 120 solar panels outside Kaufman Stadium, which will produce around 36,000 KWh of electricity a year. The Royals also worked with a local plumbing company to make the outfield fountains, the hallmark of the stadium akin to Fenway Park’s Green Monster or Wrigley Field’s ivy covered walls, more efficient.

MLB is encouraging all teams to invest in solar systems and “was also the first league to create an online league-wide tool to measure the energy and water used at all MLB stadiums, as well as the amount of waste that is recycled and paper purchased with recycled content.”

Nationals Park in Washington DC, was the “first major professional stadium to become LEED Silver Certified by the U.S. Green Building Council.” The stadium is part of a Voluntary Clean Up Program which includes environmental remediation of the site it’s built on. It has also used efficient plumbing and lighting elements, recyclable building materials and drought resistant landscaping to further reduce water use.

“The results have been remarkable, as the Pirates now divert nearly 70 percent of all waste from PNC Park out of the waste stream through recycling and composting efforts. That number has increased steadily each year from 27 percent in 2009, 36 percent in 2009, 40 percent in 2010 and 61 percent last year.”

The greening of sports arenas in the U.S. is not limited to baseball fields. The NFL’s Philadelphia Eagles get about 25% of their electricity from renewable sources and the Jumbo-tron at Lincoln Financial Field is solar powered. Additionally, the Staples Center in Los Angeles — home of the Clippers, Lakers and Kings – recently replaced “3,000 halogen fixtures with LEDs, thereby reducing energy consumption by 12 percent and energy costs by over $80,000 per year.”

According to Peter Lehner at the NRDC:

“What’s remarkable about the innovative efforts taking place across so many organizations, from the NHL to the USTA, is that all this change essentially stemmed from NRDC’s work with one team, the Philadelphia Eagles, in 2004. Smart businesses know a good idea when they see one. Saving on water, energy and waste bills is good for any organization’s bottom line, and NRDC’s efforts soon expanded to other teams, other leagues, and specific events, like the NCAA Final Four, where we helped recycle seven tons of paper, bottles and cans, compost 1.5 tons of food, and donate leftovers to local charities, and the U.S. Open, which has now recycled more than 18,000 tennis ball cans since partnering with NRDC in 2008.”

But not all is sunny in the green sports movement. In 2005, the organizers of the 2012 London Olympics promised that the games would be the “greenest ever.” However, as a recent article in the Guardian points out, the Games will fall short of expectations. According to the World Wildlife Fund and BioRegional, the London 2012 Olympics will be neither carbon neural or zero waste and will consume more energy than renewable resources can provide for it.

However, the London 2012 Games did meet many of its environmental goals and took positive steps for future Olympics. In the words of David Stubbs, the Olympics’ head of sustainability:

“We have kept the spirit, and in most cases the letter, of what was promised, and we will leave a long-term legacy that is positive, environmentally. To use a footballing analogy, we did not necessarily win every match but we did win the league.”

Sue Riddlestone, the executive director of BioRegional was less optimistic about this year’s Olympics, but shared Mr. Stubbs’ outlook for the future:

“London 2012 has set the sustainability bar high for future summer Olympics [but] there were some promises made in 2005 which London 2012 didn’t keep, even though we know they tried. We were especially disappointed about the failure to meet the renewable energy targets. So the journey to deliver a sustainable Olympics will continue.”

The Olympics show how hard it is to make sports “sustainable.”  But there are some success stories emerging in sports. And hopefully, as more of these stories emerge, they can provide a catalyst for change outside the sporting world.