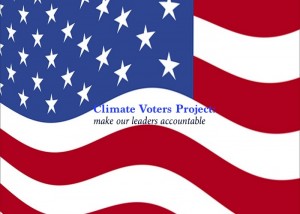 A new project, called Climate Voters, could be operated within the League of Conservation Voters, or could be part of a collaborative effort in which many environmental organizations participate.

This is the project’s slogan:

Climate Voters’ mission is to give a political voice to growing numbers of people concerned about climate change. As the problems connected with climate change worsen, political infrastructure needs to be put in place to mobilize and organize a movement that forces politicians to take the issue seriously.

While the League of Conservation Voters deals with a large number of environmental concerns, there is no voter engagement operation that speaks to and mobilizes citizens whose primary concern is climate change. The League could use its expertise in environmental voter engagement to build up this separate organization within its umbrella, or the League could put together collaborative effort with other organizations, like 350.org, which is focused on climate change but has no electoral operation.

While there are those who question the science behind climate change, these people will be increasingly marginalized as the problem becomes undeniable. Climate change is going to become more and more important in public policy as the environmental situation becomes more dire; rising sea levels, extreme weather, shrinking glaciers and all these trends will bring with them the rising tide of climate refugees. Climate change will become more salient as an issue and candidates will be forced to take a position on whether they want to reduce greenhouse gas emissions. There will be an unmet need to mobilize voters on climate as the issue consumes more and more of our political discussion.

The increasing politicization of the climate change issue means voter mobilization is a crucial step in a winning political strategy. Politicians, who argue against cutting emissions, are getting more and more bold. Their bold statements make them more politically vulnerable. There needs to be pushback from an organization that is electorally focused. As the problems and evidence mount, it will become easier and easier to silence the climate deniers.

Reducing greenhouse gas emissions will require policy change at the federal level. For this to happen, politicians will need to feel the heat on Election Day. When politicians take the political power of the climate change activists seriously, they will pass laws to reduce emissions. Existing environmental non-profits are not taken seriously enough on Election Day because they don’t have the capacity to deliver votes and by doing so, unseat politicians. This is why Obama is afraid to even bring up the issue in this campaign because Climate Voters are not perceived as a potent force in election campaigns.

Some may argue it is too early to build up Climate Voters, that there are just not enough people who care about the issue, that climate change is vague, far away and does not engage people’s emotions. But I would argue this is why we need to start the campaign now that targets various constituencies and find a way of framing this outreach that engages people’s emotions. We can begin with the environmentalists, there are enormous lists of environmental votes that we can compile, then we can move on young people — after all it is their future which is at stake, then farmers, who have outsized influence in Congress due to the make up of the senate. Farmers will certainly be on the front lines of the climate struggle. Then there are the various people in involved in the burgeoning clean tech and renewable energy industries. We see how wind power could play a role as Obama and Romney fight for voters in a battleground state like Iowa. Lastly, we could target mothers and seniors with a direct emotion appeal: aren’t they concerned about the world they are leaving their children and grandchildren?

A political movement to address climate change will not be built on its own. We need to put the infrastructure in place as public opinion moves and concern grows and politicians won’t act unless the Climate Voters force them too by raising their collective voice on Election Day.