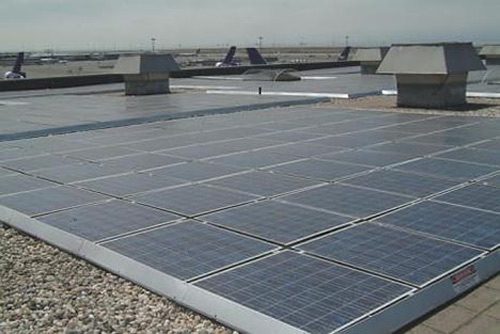 First the good news; in 2011 and 2010, total installed capacity of solar energy doubled, in 2012 there was more installed capacity through three quarters than all of 2011 combined. The average price of a solar panel has declined 58% since the beginning of 2011 and there are over 119,000 solar workers in the U.S., a 13.2% increase over 2011. Plus, the solar industry receives more venture capital than any other clean energy sector. There is good reason for excitement – the National Renewable Energy Laboratory estimates that there is enough available rooftop area to support a combined 819 Terawatt hours (TWh) annually, which is equal to about 20% of total U.S. electricity demand.

Still, solar accounts less than 1% of electricity consumption in the United States. Despite the exponential growth of the industry, it has struggled to make real ground in the race against rising demand and carbon emissions. Furthermore, while the low prices (caused by over-supply) for solar panels has lead to more installations, it has meant tough times for manufacturers, which make up almost 50% of the solar workforce.

The name of the game is scale. Utilities have realized that large projects of Concentrated Solar Power (CSP) or solar farms can provide enough electricity to move the needle. However, in order to truly unlock the potential of solar, rooftop installations must become the driving force of growth. The residential and small-commercial markets have been growing, but there is currently no mechanism to help this market achieve real scale. Currently, around 40% of the price of solar installations is due to soft costs. Although these are dropping due to improved solar energy training and permitting processes, soft costs are still a major challenge.

One of the biggest constraints for the distributed market (i.e. rooftop solar) is financing. Models like the Power Purchase Agreement (PPA) have enabled more individuals to obtain solar energy by giving up ownership of the project and simply paying for the electricity it produces, but finding adequate financing for these projects remains an issue. There are generally so few players willing to take on the risk of financing a solar project that the cost of capital ends up being very high, in fact, only seven commercial banks currently invest in solar projects.

In order to effectively take advantage of the potential of rooftop solar, a model must be adopted that brings down the cost of capital, increases the amount of available capital, and builds a larger base of stakeholders to support strong policies for solar. The new concept giving hope to small-scale solar proponents is known as “Crowdsourcing Solar.”

One company has taken the forefront on this innovative new crowdsourcing model. Mosaic, an Oakland-based company developed a platform that connects investors to solar projects that need financing. These investors can contribute as little as $25 to the project of their choice in the country. Currently, the only states that allow non-accredited investors to invest in the Mosaic platform are New York and California, but the company is working with the SEC and other state governments to allow more individuals to make investments directly through their platform.

With expected yields of between 4.5% and 6.38% annually, the investments made through Mosaic are roughly on par with historical returns of the S&P 500. The interest was almost immediate – on the first day of the project’s launch, Mosaic funded all four potential projects totaling $313,000, and since 2011 it has deployed $1.1 million from more than 400 investors to fund a total of 11 projects. Moreover, the platform opens up the ability for those without a suitable rooftop to invest in clean energy.

As the model continues to prove its security and value, more states are expected to allow direct investments and more projects will be available for investment through Mosaic and others. By lining up distributed financing with distributed generation, a crowdsourced financial model has the potential to connect people in entirely new ways and build a major swell of support for solar energy.