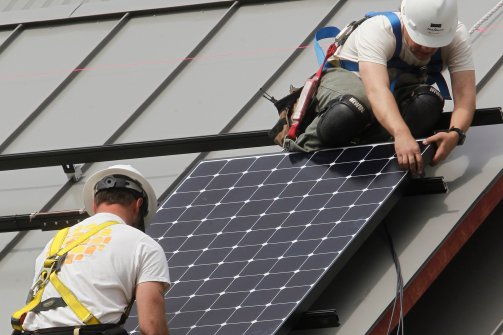 Latino voters in California strongly support rooftop solar, according to a recent poll.

The William C Velasquez Institute, a non-partisan organization charged with engaging Latino and other underrepresented groups in political and economic discussion, conducted a poll of Latino voters in California to judge attitudes toward green initiatives.

The survey went beyond solar energy, to show broad support for green and environmental efforts in general, with 60 percent of respondents saying they would be less likely to vote for a candidate who opposed policies that support the green economy and 88 percent saying they are more likely to re-elect a legislator who “voted for stronger clean air standards to reduce pollution. Two-thirds of respondents said they believed “increasing the use of clean renewable energy is important. Another 54 percent said they believed that growing the state’s solar energy industry would create new jobs.

“It is clear from the survey results that Latinos are making choices about their preferences of energy sources and those choices are clearly green and rooted in not only public health concerns but excitement about the job potential that rooftop solar growth provides,” said Antonio Gonzalez, president of the William C Velasquez Institute.

The study also found broad support among Southern California Latino voters for net metering, which is the practice of a utilities crediting homeowners with rooftop solar the retail rate for excess electricity their panels generate. The poll found that 70 percent said they supported the net metering law and 74 percent said they agreed with the statement: “If customers are required to buy power from the utility at a certain price, the utility should have to buy excess power created by customers’ solar panels at the same price.”

CAUSE is one agency among a few that have come together as utilities seem poised to fight the solar energy industry and net metering requirements.

“The Latino community now realizes that jobs and public health go hand in hand with the clean economy, and rooftop solar is leading the way,” Gonzalez said in a statement, “Latinos will hold their elected officials accountable if they are too cozy with groups like the investor-owned utilities that rely on fossil fuels for energy generation.”