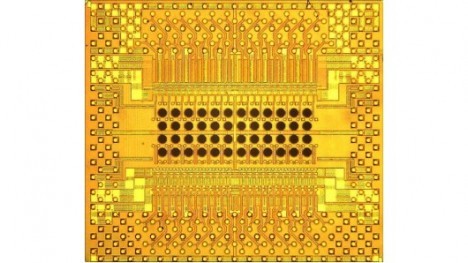 When people think about green energy, typically solar, electric vehicles, wind, biofuels, and LED lighting come to mind; however, much of the world’s energy is consumed from electronic devices and computers, and the industry has been researching new, faster, power-saving microchip technology that consumes dramatically less energy than prior generations.

Recently, IBM scientists announced the development of a prototype optical chipset, which was named “Holey Optochip” and is the first parallel optical transceiver to transfer one terabit of information per second or the equivalent of downloading 500 high-definition movies and only consumes 5W of power. Thus, this initiative supports green computing as the Holey Optochip achieves record speed at a power efficiency (the amount of power required to transmit one bit of information) that is one of the best ever recorded.

Besides the enormous power-savings benefit, the raw speed of one transceiver is incredible, in being equivalent to the bandwidth consumed by 100,000 users at the current high-end rate of 10 Mb/s high-speed internet access.

Optical chip communications or chip power-savings research is occurring at companies besides IBM such as AMD, Intel, HP, Nvidia and Texas Instruments to meet future revolutionary demands for electronic data transfer capability. In addition, national labs such as Sandia as well as universities such as Arizona State University in the Phoenix metropolitan area have investigated optical chip technology. At one terabit per second, IBM’s latest advance offers remarkable amounts of bandwidth that could eventually be commercialized to transfer loads of data to support higher capacity needs for businesses and consumers.

Optical networking has been demonstrated across the industry to significantly boost data transfer rates by speeding the flow of data using light pulses, as opposed to sending slower, electrons through wires. Moreover, current advances in commonly-used microchip technology for higher-speed applications rely on shrinking the size of critical transistor features, but the industry is facing a physical limit soon for the standard materials and processes, unlike the scenario for optical technology.

The optical microchip by IBM was fabricated with 48 holes through a standard silicon CMOS chip. These holes allow optical access through the back of the chip to 24 receiver and 24 transmitter channels to produce an ultra-compact, high-performing and power-efficient optical module capable of generating record-breaking data transfer rates.

What’s more, the Holey Optochip module is constructed with components that are commercially available today; thus the chip technology is closer to production than more exotic competitive technologies by virtue of economies of scale. Furthermore, lower performance optical chips have already been implemented in supercomputers; thus establishing a track record of reliability.

Much of the future work is centered on process integration, circuit design and innovations in microchip packaging for a final product. This progress in power-saving interconnects is critical for companies who rely on high-performance computing to manage their energy load while performing aggressive applications such as advanced storage, analytics, data modeling and forecasting, including weather predictions, which is an utmost necessity as tornadoes continue to ravage the US.

Despite the recent milestone, IBM does not expect actual commercialization of this specific technology, in collaboration with manufacturing partners, until the next decade. Thus, states such as Arizona have an opportunity to attract companies for the R&D and manufacturing of this technology in order to diversify and stabilize their economy. The future of computing and power-saving electronics will rely heavily on optical microchip technology to facilitate immense data demands and cloud computing.

For more info: In order to anonymously receive FREE email alerts on future green technology and business articles, please subscribe on my  homepage  and/or follow me on Twitter or the GLG consultancy platform for additional discussion & comments.