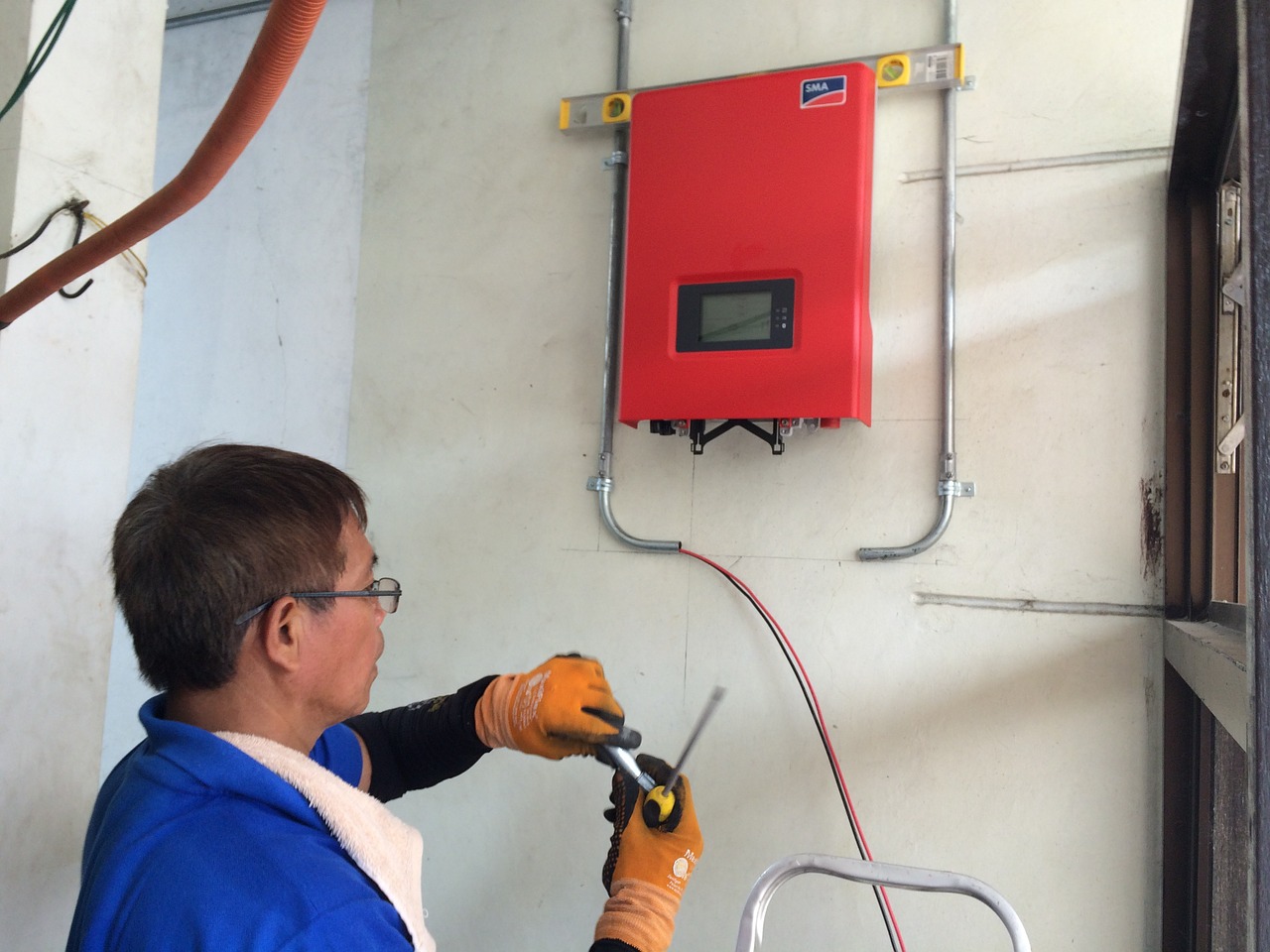 A power inverter for a PV system is the most critical piece of hardware that does the main job. It converts the Direct Current from the solar panel into 240 Volts Alternate current. It helps you run your home electric devices that require 240 Volts to operate. If you’re using a massive, long-lasting solar setup, you must use a robust and high-quality inverter with an excellent cooling system.

Using a portable and smaller PV system such as on boats or RV also needs a suitable inverter. Either way, an inverter can break on you, and you might need to troubleshoot or fix it yourself, especially while on the move. In this article, I will guide you through the safe processes of fixing your power inverter.

How does a power inverter for a PV system work?

Before you dive into the troubleshooting process for a power inverter, you must know how it works at first. Here is a simple explanation of how the inverter works to convert the DC energy from the panel into AC:

Solar inverters come in different types, depending on working methods, here are the ones you will find in the market:

How to fix a power inverter for a PV system?

An inverter with a PV system should chug away a few years without any major issues. But you may face problems with the system even before it’s a long time. Here are the things you should know when you have to troubleshoot or fix your PV inverter:

Most of the time, you’ll get unexpected service faults from the system if there is a problem with your inverter. You may get less power from the promised amount by the installer, or it may not work at all. Whether you use RV power inverters or PV inverters or any kind, have a look at the

light indicators of the inverter to find out the problem; there should be three lights, green, red, and an orange one. If the red or the orange light illuminates instead of the green light in the daytime, the system is faulty. Most of the time, the problem happens if you’re using it for quite a while, and the battery goes weak.

If your inverter LCD screen is not showing anything, it doesn’t mean that the inverter isn’t working at all. The screen may break down because of heat or some other electronic problems. Check if the inverter is working fine; to do that, check the energy meter if you’re still saving on solar. If the electric meter is counting the solar in the daytime, your solar is still good to go. If it doesn’t show anything, try restarting the inverter using the previous process. If it’s still stubborn, you may have to call the installer for a replacement unit.

An inverter also may show fault codes to help you understand the problem if it has the feature. Check if the fault is with earth leakage because of moisture on the circuit breakers on the rooftop. It can also be with the connectors between the panels, or some other problems also may trigger the fault. If you’re sound technically with the panel installation and inverters, you can check the fault yourself. For that, go through the solar manual and check the connections for the fault. Or you have to call the installer to have a technician to attend the fault.

If you’re getting red light during the daytime, the problem is with the battery in most of the cases. First of all, check all the connections to the battery if you have a loose connection. Make sure the terminal looks good, and they are not corroded because of the humidity or release of hydrogen. If the battery terminal and the connectors to the inverter look good, the battery may have gone discharged. Make sure it has enough lead-acid in it and has no physical or internal damage. You may have to get a replacement for the battery in that case.

Photovoltaic (PV) systems are the best option for those who are leaning toward renewable energy sources, especially solar PV. Most of the issues with PV systems take place in three sections, the panels, the inverter, and the load system. Here, I’ll get you a quick insight into how you can address the problems with these three modules:

The inverter in the PV system does a crucial job as it converts the DC power from the PV into AC power. If the inverter isn’t producing the correct voltage output, go check the DC input voltage first because the process starts there. It cannot produce the right output if it doesn’t get the right current input. Check the display of output numbers if the kW values are not abnormal compared to the last inspection. There can be anomalies because of a blown-fuse, and some broken or corroded wires, or tripped breakers.

The PV load is responsible for delivering power in the building with the right voltage. When the load system goes down, the total production will get into a problem. If you’re getting less load voltage, look for a blown-fuse and the circuit breaker, or a tripped and bad wiring. Plugin another load to test if the current load is operating properly with different voltage.

If the problem isn’t with the load or the inverter, go for the PV panels on your roof. You should start troubleshooting the PV panels by physically checking the panels for damage. The damages can be in the panels, the connections wires, or the arrays and switches. If there is any fuse blown because of lightning strikes or faulty and dirty connections, fix them and check again. Make sure the modules have no lack of contact, and the top of the panels should be cleaned as well.

5 Most Common Problems With Solar Inverters

Every home solar system has a unique way of delivering electricity supply, which has its unique challenges. Solar systems are usually maintenance-free and easier to address as long as the problem is external, such as panels. However, if something goes wrong with the inverter, it’s a bit harder to address and fix it. Here are the five most common issues that you may face with a solar inverter after installing it:

Faulty installation of the inverters

As the solar inverters are supposed to serve you for years without any problem, they come sturdy enough to confront problems. However, that’s only when you’re installing it the right way, without any sort of faulty connection or yield. So, most of the internal problems with solar inverters happen because of incorrect installation in the first place. Start with the physical misconnections in the modules that work for it. Before you hire someone to install or fix the inverter, make sure the installer is an expert with enough experience. Run some tests such as Yield test, reactive power regulation, remote control for activation, or deactivation. Make sure everything is delivering the right power as the manufacturer refers to.

Overheating issues are one of the most common problems with solar inverters, which isn’t a good sign of service. The high temperature in the inverter may affect the overall service and energy production badly. Even the production may stop the system if the heat reaches the maximum operable temperature. The best way to address the temperature problem is to check for ventilation regularly. If you’re setting the inverter in a closed room, make sure the room has adequate ventilation to keep it cool. Depending on the type and size of the inverter, you have to give it a good cooling technology as well. You can set up cooling fans in the switch cabinet and make an airflow pattern for the best result.

The inverter does not restart after a grid fault

When the solar system encounters a grid fault, the inverter should be able to restart on itself after it comes online. After a sudden deactivation, the system trigger cut-out may occur at a voltage peak in the grid. Once it’s back online, the inverter should be able to restart on its own, or the service team has to come. To keep out of such a problem, you must get the right inverter in the first place with the best efficiency. Getting the right inverter will help you stay out of unwanted production losses after a grid fault. If you’re living in an area where the grid connection isn’t stable, it’s important to get the right inverter.

The Maximum Power Point Tracking (MPPT) is the basic operating technique for modern inverters. It’s the best option that can maximize the inverter’s performance with a big-scale current of large PV systems. The strings hold on to multiple PV modules in rows, and all are connected to the inverter system jointly. However, the strings may vary on the performance of delivering power because of many reasons. Different panel positioning, faulty panel, shading, and other variables will affect the result of the strings. Despite the differences in the strings, the MPPT module ensures that the strings are using the best possible supply voltage.

The inverter you’re using with the solar power can break on you at any time and get you in trouble. You must know these simple hacks to address it, especially with RV power inverters as you’re out of the roads. To check efficiently, you can take a meter and check the outputs from the AC connectors to be sure. If you have been using the battery for quite a while now, it can discharge earlier than you expected. So, be sure to keep the battery on its pick while going out, depending on the solar power.

Previous ArticleWhat Is Wind And Solar Energy Hybrid System and HRES ?Next ArticleEmail vs. Social vs. Search Marketing for Solar Companies