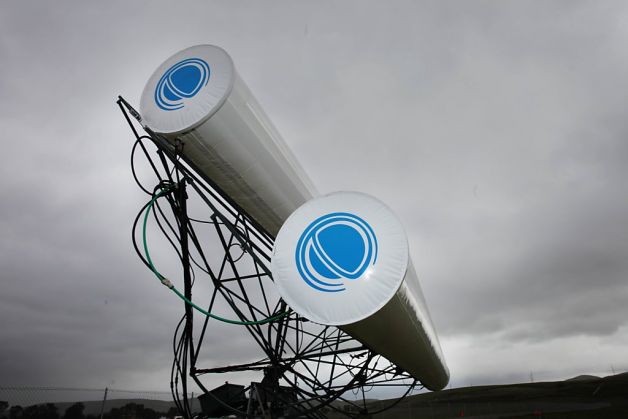 “We didn’t take anyone else’s idea and improve on it,” said Cool Earth CEO Rob Lamkin. “We started with a clean sheet of paper.”

Cool Earth’s objective when it was founded in northern California six years ago was to make the cheapest, most efficient solar power generation possible.

“Solar has gotten a lot cheaper in the last six years,” Lamkin said. “But we see ways for it to be even cheaper.”

Starting with a mission to make solar cheap, Lamkin and his team looked for the most affordable materials and how to minimize the amount of material they used.

Cool Earth designed a concentrating solar system that builds an optic lens into the thin plastic and molds it into a tube, which is inflated to hold its shape. A little fan like the one on a laptop computer keeps the air pressure in the tube constant.

Using air instead of molding a solid shape out of glass and metal is part of Cool Earth’s cost savings methods.

“So far air is plentiful and cheap,” Lamkin said. “If it ever isn’t, we’ll have bigger problems than energy. And we don’t get taxed to use it.”

Additionally, the shape of the tubes and their light weight mean there is little gravitational or wind load, which means the stands for the tubes can be lighter weight and lower cost as well.

Lamkin said the tubes pass the same hail test flat panels have to pass and the company builds new tubes every five to seven years into its economic model.

Clean Earth places basic silicon solar cells in the tube, which generally have efficiencies in the mid 20 percent range, and magnifies them 20 to 30 times to generate about 1.2 kilowatts per tube. Multi-junction cells with efficiencies above 40 percent are magnified 1,000 times to produce 2 kilowatts. Cool Earth can use either kind of solar cell.

“That’s very unusual,” Lamkin said. “We can be either high or low concentrating. It’s the same tube. We just switch out the optics.”

The company has partnered with Sandia National Laboratories in New Mexico, where Cool Earth will build a test field of its concentrators.

The company is also building a demonstration solar farm on its five acres and is raising equity capital to develop projects and sell power to utilities in order to prove the technology in the industry.

“I would love to start selling to other developers,” Lamkin said. “But our technology is so disruptive and so new, I don’t think anyone would be crazy enough to do it before we do.”