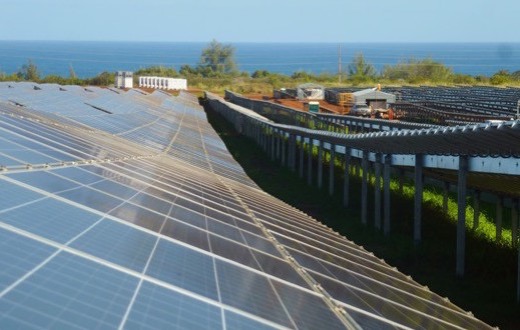 The prospect of cheaper, petroleum-free power has lured the Kauai Island Utility Cooperative (KIUC) to quintuple utility-scale solar capacity over the past year, building two 12-megawatt photovoltaic arrays. These facilities are the biggest and a significant contributor to the island’s 78-megawatt peak power supply. When the second plant comes online this summer, peak solar output on Kauai will approach 80 percent of power generation on some days, according to Brad Rockwell, the utility’s power supply manager.

That puts Kauai on the leading edge of solar power penetration, and KIUC has bruises to show for it. Power fluctuations from a first large plant installed in 2012 have already largely burned out the big batteries installed to keep solar from destabilizing the island’s grid.

Now KIUC is taking a second try with batteries and hoping energy storage technology has progressed sufficiently to keep the same problems from recurring. The new system, installed beside the solar farm nearing completion on Kauai’s northeast shore, is one of the first commercial installations of grid-scale lithium-ion batteries manufactured by the French battery giant SAFT.