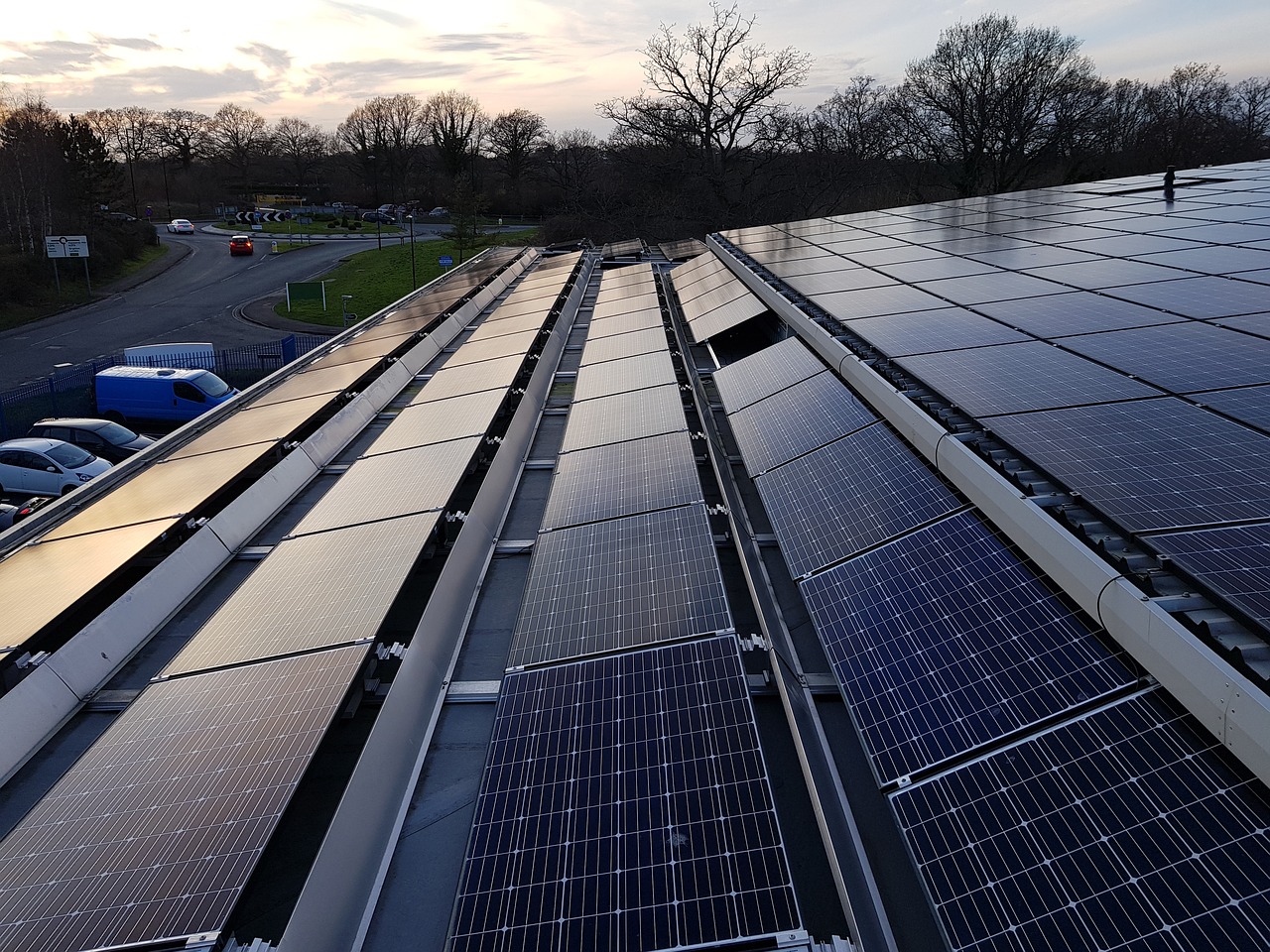 Frameless solar panels, also known as ‘glass-on-glass’ modules, are an aesthetically pleasing variant of the traditional solar panel. When installed, they appear to be “floating” as they do not require support frames to be erected. Solar cells are inserted between the two layers of glass, which makes the glass thick so as to provide structural support and strength. These panels and modules offer multiple advantages over traditional panels. For example, frameless solar panels are noticeably less expensive than regular panels.

Moreover, they reduce transportation costs owing to their higher density in terms of packaging and less weight. Since these panels do not have any aluminum frames, there is little to no debris build-up which enhances their performance. However, their biggest advantage lies in their aesthetic appeal, a feature that has been criticized as being absent from conventional solar modules.

Numerous installation methods and techniques have been developed to fit in frameless solar panels in different structures. For example, adhesive-based solutions have been devised to install these solar panels into ground-mounted and ballasted systems, such as in open fields or desert regions. Adhesives are a trustworthy option as they are heavily relied upon by the construction industry and can, thus, be confidently utilized for solar installations.

In a similar manner, downward-sloping or “pitched” roofs can have solar panels installed using frameless clamps armed with rubber guards to protect the glass. This enables a traditional installation procedure whilst eschewing the need for frames. These innovations have made possible the installation of solar panels in unconventional settings and made the adoption of solar energy devices feasible.

The innovation will also see higher adoption in residential areas because they ensure energy efficiency whilst being aesthetically pleasing. However, it must be remembered that analyzing solar power as a form of renewable energy will be the best approach towards holistically comprehending the frameless solar panels market.

Monocrystalline Panels to Present the Most Profitable Business Opportunities

To establish a deeper understanding of the global frameless solar panels market, it will be useful to take a look at some of the segments in the market. To that end, market research firms have identified monocrystalline panels as the segment that holds the greatest business potential. Monocrystalline panels are made up of monocrystalline silicon and have the highest efficiency compared to other panels. This is mainly because of the purity of the silicon used in making these panels. They are also the most expensive variety due to their significantly higher output, long durability, and ergonomic designs.

In India, the most energy-efficient monocrystalline solar panels at 19% cost around ₹42 to ₹46 Watts Peak (WP) for a watt range of 200 to 300 W. The other two types in application segment are thin-film panels and polycrystalline panels. On account of cost-effectiveness, monocrystalline panels have found greater application and adoption in commercial spaces. Polycrystalline panels are cheaper and are, as a result, being increasingly installed in residential buildings. Similarly, the global frameless solar panels market has been segmented on the basis of application, with particular focus on the two most noteworthy segments – residential and commercial.

According to the Fortune Business Insights, North America and Europe are expected to hold a commanding position in the global frameless solar panels market till 2026. One of the most prominent reasons for this is the rising investment in the renewable energy sector in the US, especially in solar power. According to a 2019 report by the US-based Solar Energy Industries Association (SEIA), the solar industry, currently valued at US$ 17 billion, will double by 2024. The report points out the fact that increasing investments in the industry have made solar power more widespread in the US. For example, the SEIA projects that the number of solar installations will reach 4 million in 2023 from the current 2 million – a 100% increase in less than 4 years, leading to a significant expansion of the global frameless solar panels market size.

Furthermore, the transition to solar power has had a positive impact on certain socio-economic factors in the region. For instance, the Office of Energy Efficiency and Renewable Energy under the US Department of Energy estimates that jobs created by investment and growth in the solar energy industry have risen by 160% since 2010. Moreover, innovation and competition in the solar industry in the US have also brought down solar panel installation costs by almost 50% since 2014. Such developments are expected to contribute massively to the global frameless solar panels market growth in the foreseeable future.

Deep Commitment to Renewable Energy to Favor Expansion in Europe

Countries in the European Union (EU), such as Spain and Italy, are taking decisive steps toward making the continent independent of fossil fuels. Solar energy is playing a critical role here. According to a report by the International Renewable Energy Agency, at 270 GW, solar PV will constitute the bulk of the capacity additions in Europe’s power sector by 2030. The report also highlights that solar power will be the key to increased cost savings in the near future. The global frameless solar panels market is well-positioned to gain as European countries rapidly reach their renewable energy targets. Additionally, the solar market in the EU is growing at 36% annually, as per the figures released by Solar Power Europe, a Belgium-based energy think-tank. Therefore, Europe is poised to offer plentiful lucrative business opportunities in the global frameless solar panels market until 2026.

On account of the enormous solar energy potential held by India and China, both of whom receive sunlight for almost 8 months a year, the global frameless solar panels market size is slated for rapid expansion in the coming years. Government-led initiatives will play a central role in the growth trajectory of the market in Asia-Pacific. For example, India launched the International Solar Alliance in 2015 at the Paris Climate Summit. The Alliance comprises of countries that are located between the Tropics of Cancer and Capricorn that will take active measures to promote the use of solar energy through the participation of the public and private sectors.

China, too, is making an all-out effort toward building a solid foundation for harnessing renewable energy sources, particularly solar energy. UNEP’s Global Trends in Renewable Energy Investment Report states that China added 53 GW to its existing solar energy capacity and invested US$ 86 billion in 2018. In fact, the report underscores the fact that China has invested US$ 126.6 billion in its renewable energy sector, making it the world leader in renewable energy. As the movement for sustainable development gains more traction, Asia-Pacific will create more profitable opportunities for companies engaging in solar power and other renewable energy sources. The global frameless solar panels market potential will get enhanced as a result.

India has been at the forefront globally in terms of making commitments and taking a leading role in energizing the renewable energy sector. Besides taking the bold step of launching the International Solar Alliance, India is proactively trying to elevate the solar power capacity within the territorial boundaries. For instance, the Indian government launched the National Solar Mission under the Ministry of New and Renewable Energy (MNRE) in 2010 and has regularly revised its targets. Currently, the MNRE aims to attain installed renewable energy at 175 GW by 2022. Out of this, 100 GW is to be harnessed through solar power facilities.

The economic benefits of industrial and commercial spaces are tempting. For example, tariffs for rooftop solar are cheaper by 17% compared to industrial rates and 27% cheaper compared to commercial rates. More importantly, in many residential areas, rooftop solar installations are gaining grid parity in various regions in the country, making India a burgeoning market for solar power. Technological advancements will bring down installation costs which will ultimately benefit the global frameless solar panels market in the long-run.

Strategic Partnerships are the Preferred Routes for Leading Market Players

Solar energy is being seen as the most viable alternative energy source to conventional fuels such as coal and petrol. Companies are already increasing their investment in developing solar technologies. For example, in the US, Amazon has installed 50 rooftop solar structures across its sorting and fulfilment facilities which satisfy almost 80% of the energy requirements of the buildings. Furthermore, falling costs are augmenting the opportunities for innovations and collaborations. The differences in costs are there for everyone to see.

In 2009, the cost of a solar panel installation was around US$ 8.50 per watt. Ten years later the cost has fallen by more than 60% to around US$ 2.90 per watt. The recent record-breaking 300 MW tender in Saudi Arabia to produce electricity using solar power at just US$ 2.34 per watt only drives home the point.

Many companies all over the world are adopting different strategies to mark their presence and make their products visible in the solar industry. Some of the most notable developments in the global frameless solar panels market include:

Canadian Solar is one of the world’s foremost solar power companies and it is looking to mark its presence in diverse and promising regions such as South America. For instance, in August 2019, Canadian Solar managed to secure a US$ 120 million financing from the Banco do Nordeste do Brasil. The aim is to develop the company’s solar projects in Francisco Sa and Jaiba regions in Brazil. These projects will be funded by Canadian Solar for 23 years with regard to construction and operation.

In a similar fashion, the company signed Operations and Maintenance agreements in August 2019 with Daydream Solar Farm Pty Ltd, Gannawarra Solar Farm Pty Ltd, and Hayman Solar Farm Pty Ltd in Australia. The contract includes three solar photovoltaic power plants with a combined capacity of 300 MWP and Canadian Solar will be responsible for their performance management, plant monitoring, and preventative and corrective maintenance.

In May 2019, China-based Trina Solar announced that its R&D labs had managed to developed the world’s most efficient bifacial solar cell, showcasing an energy-efficiency of 24.58%. The product is an n-type mono-crystalline silicon (c-Si) i-TOPCon (Industrial Tunnel Oxide Passivated Contact) solar cell. It has a rear full-area passivating contact with a boron emitter at the front.

In early 2018, another China-based company, Seraphim Energy, signed an agreement with the Solar Centre of Guadalajara, Jalisco in Mexico which will give Seraphim rights to supply and distribute photovoltaic modules in the country. As per the terms of the contract, Seraphim will begin shipping dual-glass and high-efficiency glass modules to Solar Centre immediately. Together, the two companies will aim at increasing their market share in Mexico, with Seraphim also establishing itself in Latin America.

Adani Solar, in April 2019, announced its partnership with Risto Solar to launch a retail distribution network in Kerala. Risto Solar will function as the exclusive authorized partner of Adani and will be responsible to cater to the retail requirements of the company. Risto will also be charged with the responsibility to handle orders up to 150 kW of solar power as well as manage overall service, lead generation, and conversion.

US-based Sunpreme, a solar PV manufacturer, announced the completion of a solar installation at a shopping centre in California, which was accomplished in collaboration with Tigo Energy. The installation includes GxB380 SM Bifacial PV Panels, manufactured by Sunpreme itself, and Tigo’s TS4-L (Long Strings) Optimizers. Consisting of the rooftop solar and commercial carport, the total capacity of the system is totalled at 750 kW.

In conclusion, it would be apt to say that as exhaustible resources deplete at a rate faster than they can be replenished, the world will experience an increasing need and dependency on renewable energy sources that are not only inexhaustible but also ensures sustainable economic development that benefits all indiscriminately.

Shantanu is currently working for Fortune Business Insights, a market research firm. He is experienced in writing articles, press releases, and blogs for the company.