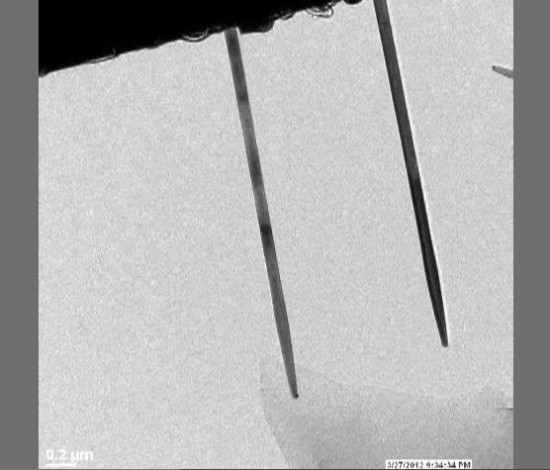 New research led by an electrical engineer at the University of California, San Diego is aimed at improving lithium-ion batteries through possible new electrode architectures with precise nano-scale designs. The researchers created germanium nanowires that block diffusion of lithium (Li) across their silicon surface and promote layer-by-layer axial lithiation of the nanowire’s germanium core.

Shadi Dayeh, a professor in the Department of Electrical and Computer Engineering at the UC San Diego Jacobs School of Engineering, explained that this work could lead to “an effective way to tailor volume expansion of lithium ion battery electrodes which could potentially minimize their cracking, improve their durability, and perhaps influence how one could think about different electrode architectures.”

The research was recently published in the journal Nano Letters in the paper “Tailoring Lithiation Behavior by Interface and Bandgap Engineering at the Nanoscale.”
By coating germanium nanowires with silicon, the researchers stopped nearly all surface diffusion of lithium ions into the nanowires. Instead, lithium diffusion, known as lithiation, occurred layer by layer along the axis of the nanowire. This is in contrast to lithiation from the surface of nanowires not covered with silicon.

Watch a video below that shows the axial lithiation of a silicon-coated nanowire’s germanium core, as well as radial diffusion of lithium into an uncoated germanium nanowire. Video is from Dayeh’s Integrated Electronics and Bio-interfaces Lab at UC San Diego and collaborators at Sandia National Laboratories.

This work builds on research demonstrating excellent control over germanium / silicon (Ge/Si) heterostructuring, which Dayeh and colleagues recently published as a cover article in Applied Physics Letters and a cover letter in the journal Nano Letters.

Dayeh grew the nanowires during his time as a postdoctoral researcher at Los Alamos National Laboratory (LANL). Lithiation experiments were performed by two postdoctoral researchers from Sandia National Laboratories, Drs. Yang Liu and Xiaohua Liu, and Dayeh’s postdocdoral researchers working at LANL. Dayeh formulated the mechanism and performed the analysis and simulations after joining the faculty of the Electrical and Computer Engineering Department at the UC San Diego Jacobs School of Engineering.