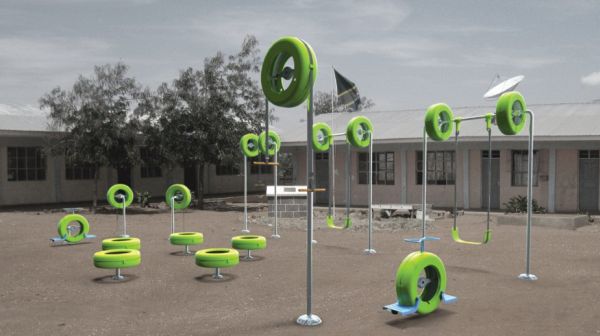 We have toyed with this idea of playgrounds for kids with various installations that produce clean energy. But some of the previous models that have explored this option and even our own thinking has been inclined towards the use of piezoelectric plates and surfaces that use them to turn all that energy from hyper-active and enthusiastic kids at the playground into useful power. But the team of Andrew Simoeni, Joel Lim and Funfere Koroye has taken a different approach to this by using contraptions that have built-in dynamos to generate power.

The idea is pretty simple as it fits the playground with improvised installations that have build-in dynamo units which generate power as they spin along. Installations like these at a public park or in a school should see plenty of energy being generated as there will be no shortage of keen little ones who would want to play with them till you drag them away. These units can apparently generate 31.5 watts of energy for every hour of play and that is roughly enough to power 20 bulbs for an entire hour.

Now this might not really seem very necessary in those big urban environments where you never have to worry about power supply. But with large parts of the world away from stable and continuous grid power and many areas where power lines still are non-existent, such installations can indeed make a huge difference. Add to this the fact that they keep your kids physically fit and active and really, this is an idea that needs to be put into practice.