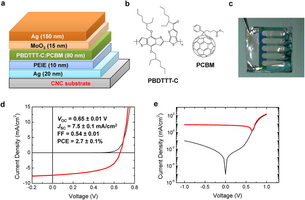 As the solar industry has been growing, so has its hazardous waste because of chemicals that are integral to making solar panels.

But researchers have discovered a process that could change all this – at end of life, solar panels could simply be dissolved in water!

That’s because they have found a way to replace glass solar panels with solar cells made from substrates derived from woody plants.

“The substrates on which the solar cells are fabricated are optically transparent, enabling light to pass through them before being absorbed by a very thin layer of an organic semiconductor. During the recycling process, the solar cells are simply immersed in water at room temperature. Within only minutes, the substrate dissolves and the solar cell can be separated easily into its major components.”

This graphic shows the film on top of paper to demonstrate its transparency:

Researchers at Georgia Institute of Technology and Purdue University published their findings in the open-access journal Scientific Reports.

“Nanocrystal substrates” currently have a power conversion
efficiency of 2.7%, which they call “an unprecedented figure for cells on substrates derived from renewable raw materials.”

The next step is to exceed 10% conversion efficiency by
optimizing optical properties of the solar cell’s electrode. Cells will be coated with a thin environmental barrier that protects them  from water and oxygen while they’re operating in the field.

“The development and performance of organic substrates in solar technology continues to improve, providing engineers with a good indication of future applications,” Kippelen says. “But organic solar cells must be recyclable. Otherwise we are simply solving one problem, less dependence on fossil fuels, while creating another, a technology that produces energy from renewable sources but is not disposable at the end of its lifecycle.”

So far, organic solar cells have been fabricated mostly on glass or
plastic, which aren’t easily recyclable. Paper substrates are better, but because of surface roughness have limited performance.

Last year, As You Sow released a report on best practices in the solar industry. Many PV manufacturers have beat standards they set for emissions, are reducing water use and reusing water. Several companies are using safer materials, relying on renewable energy to power energy-intensive processes, reducing waste by developing recycling programs that recover materials for reuse, and improving relations with workers and communities throughout their supply chains.

Here is the research: