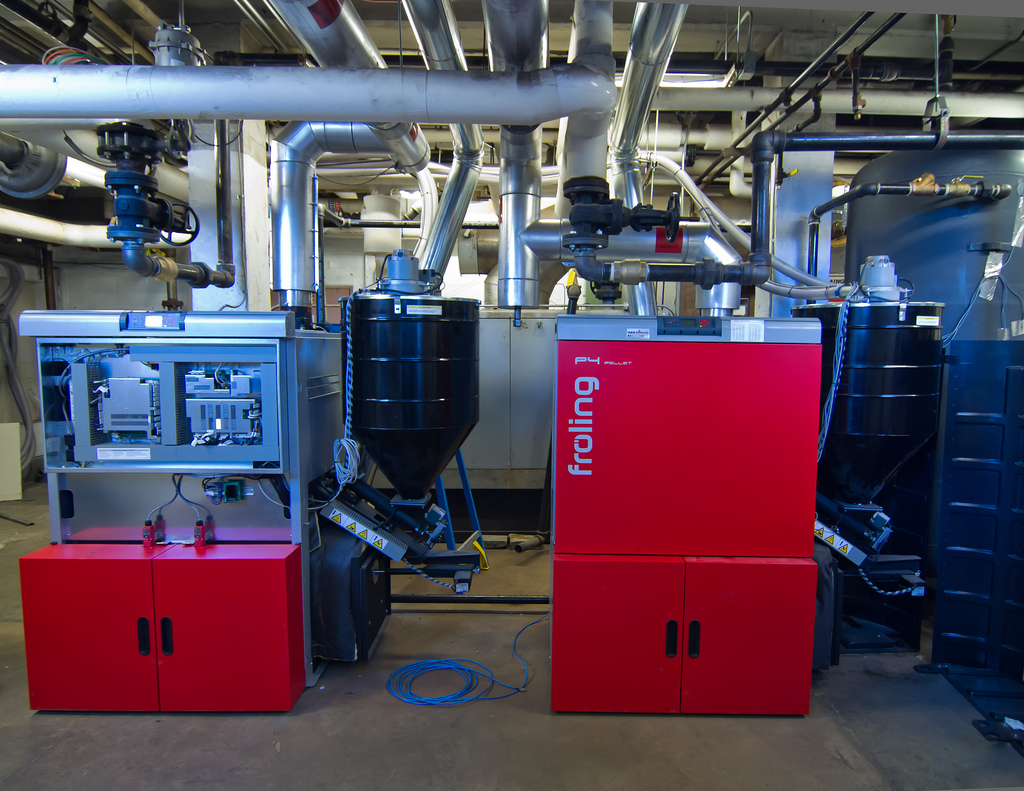 Burning animal and plant material – biomass – is the oldest source of renewable energy we have used to cook our food and keep warm, since our cave dwelling ancestors learned how to build a fire.

We’ve come a long way from creating camp fires in the forest to cuddle around while the fish we caught earlier in the day cooks on that same fire.

Biomass boilers are taking off in the United Kingdom, as a real alternative to burning fossil fuels to heat homes and business.

“Biomass” is anything naturally growing on our planet, which can be burned for fuel. Typically, biomass is any organic material, such as plants and animals. In a sense, if you have used a wood burning stove or fireplace, you have been burning biomass.

Wooden logs, pellets or chips are burned to create a sustained even heat source in a “boiler.” This biomass boiler is connected to a central heating and hot water system to heat the air and water of an entire building, such as a home or business.

The oil and gas we burn took tens of millions of years to form, under the pressure of the Earth’s crust, as layer, upon layer of bones left from animals going back to the dinosaurs is crushed into the black gold we predominantly use today. Hence it’s name “fossil” fuel, as we are literally burning fossils to fuel our homes and businesses.

Contrast that with the significantly shorter amount of time – about a decade – for a tree to grow and the simple fact that trees can be re-planted after being harvested. Once we burn a fossil fuel, it is gone forever.

It also takes significant resources to locate, drill, and mine fossil fuels, as much of what we have left on our planet is deep under the ocean floor.

As it takes considerably more effort to acquire fossil fuels, than the wood products for use in a biomass boiler, there is a cost savings in burning biomass over fossil fuels.

This carbon savings may be 3.9 tonnes a year for an average three bedroom house which burns oil, and could save that family about $441 USD (£270 UK Pounds) annually.

And if you’re in England, the Queen may give you another reason to toss out your fossil fuel burning oil boiler, and replace it with a biomass burning one.

The British government is encouraging residents to install alternatives to fossil fuels, such as biomass, by rewarding people for converting their homes and businesses to these alternative forms of heating with money.

The United Kingdom’s Renewable Heat Incentive program, which the UK claims is the first of its kind in the world, provides financial incentives to off-set the costs of installation and maintenance of alternative forms of heating to home and business owners for up to 20 years of use of these renewable energy alternatives.

It’s part of the UK’s goal to have 12 percent of their heating from renewable sources by 2020, and it’s a huge incentive to those considering biomass boilers, and other alternative forms of energy.

APH’s ingenuity and innovation shows that is’ possible for business to make money by going green, by providing solutions to our environmental problems.

And biomass does more than heat air and water, it can keep the lights on too.

Biomass can be used to generate power, as well as heat, and if the planet’s biomass resources are sustainably managed, the waste carefully controlled and governments around the world follow the UK’s lead and create incentives to encourage use, biomass could replace dirty fossil fuels, and put us all on a greener path.

Scientists see the benefits of biomass, and envision it as part of the mixture of alternative fuels we’ll need to adopt to slow climate change and minimize our impact on global warming.

These scientists see a world where biomass is used worldwide, in conjunction with other alternative forms of power and heating generation, including solar, wind and geothermal.

The key to all of this, is to stop using fossil fuels, and start using greener alternatives – such as biomass.