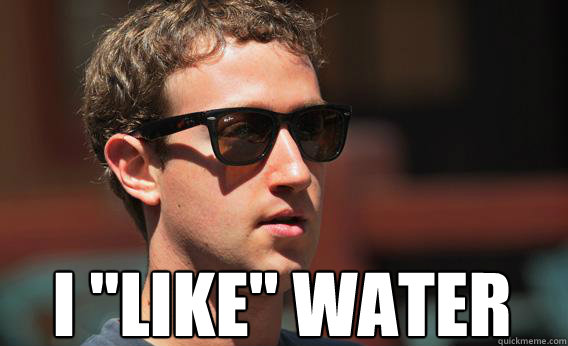 Most people know data centers use plenty of power, up to 2% of the world’s electricity and growing 12% each year. But their impact on water is much more murky.

Against that backdrop, the giant social networking company is reporting new data about its water efficiency, starting with its data center in Prineville, Oregon. The disclosure follows Facebook’s detailed report about its renewable energy mix in late July.

A new industry measure being used by Facebook, water usage effectiveness (WUE), specifically keeps tabs on the among of water used to keep the data center cool. It doesn’t measure water consumption for plumbing or office purposes.

Over the past year, Facebook figures it has used an average of 0.22 liters of water per kilowatt-hour to keep the Prineville facility at an optimal operating temperature.

“We think that 0.22 L/kWh is a great result, but it should be noted that the WUE concept is fairly new and, to our knowledge, no one else has publicly reported WUE yet,” Facebook writes in a blog about its new data collection projects. “We hope that other companies will soon start measuring and reporting WUE so we can begin setting benchmarks for the metric and working together to find new ways to improve.”

Facebook eventually plans to release the WUE metrics on a quarterly basis for all of its data centers; starting next with its second Prineville building and then focusing on Forest City, North Carolina.

Even if no one really knows what this number means yet, other technology companies or those with big information data center operations can take a cue from the best practices Facebook is using to keep water consumption at minimum.

Facebook’s heightened attention to water is part of its commitment to the Open Compute Project, an organization that advocates the creation of more energy efficiency technologies for servers and data centers. It published a detailed description of its data center cooling practices on the project’s blog: