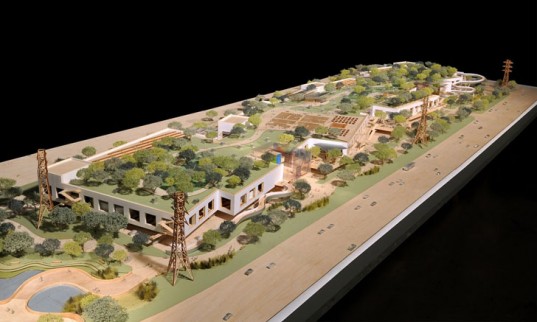 Facebook has the green light from Menlo Park’s city council to build a huge second campus that connects to its headquarters in Silicon Valley.

The company says its new 433,555-square-foot building will blend into the landscape, thanks to an extensive green roof that covers most of the very long building.

Designed by award-winning architect Frank Gehry, the goal for the white stucco building is to be hidden by landscaping and a green roof. Even though it will be 45-feet tall and even rising to 73-feet in some areas, the square footage will mostly be taken up by its very long length.

“Our intent is that it almost becomes like a hillside, with the landscape really taking the forefront,” Craig Webb, a design partner, told the Mercury News.

The massive green roof will feel more like a park, deep enough to support oak trees and long enough for a walking trail. Like Google’s new green roof, it includes cafes and kiosks. Employees will be able to walk between east and west campuses through a tunnel that’s designed for biking and walking.

The new west campus will be built on 22 acres and will house 2800 new employees. We haven’t seen details on whether it will be LEED-certified or incorporate renewable energy.

The building is being designed to accommodate Facebook’s “engineering culture.” “It will be a large, one room building that somewhat resembles a warehouse. Just like we do now, everyone will sit out in the open with desks that can be quickly shuffled around as teams form and break apart around projects,” says Facebook.

Menlo Park requires new construction to comply with its Water Efficient Landscape Ordinance, which doesn’t allow lawns bigger than 500 square feet. At least 80% of plantings must be native or xeriscape plants – those that need little or no water.

Although Frank Gehry, one of the world’s most prominent architects, is known for designing iconic modernist  buildings with titanium facades – such as the Guggenheim Museum in Spain – his most recent work includes the biggest green roof of all – Millennium Park in downtown Chicago.

Facebook hopes to break ground in the next few months.