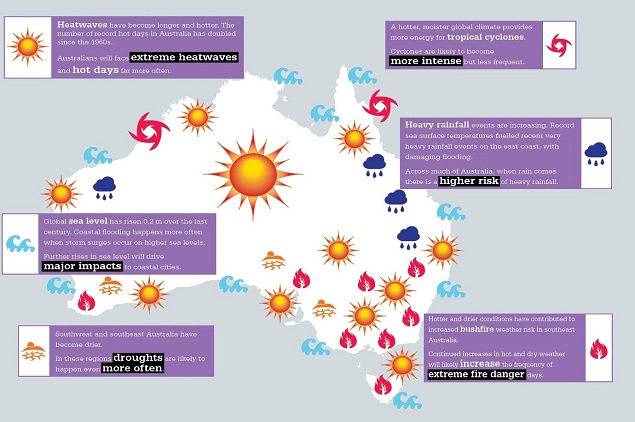 This 2013 report from the Climate Commission offers a review of the current state of our knowledge about different types of extreme weather events in Australia. These events include extreme temperatures, rainfall, drought, bush fires, storm surges, cyclones and storms. Here is a summary of some of the key findings from the report titled The Critical Decade: Extreme Weather.

1. Climate change is already increasing the intensity and frequency of many extreme weather events, adversely affecting Australians. Extreme events occur naturally and weather records are broken from time to time. However, climate change is influencing these events and record-breaking weather is becoming more common around the world.

Some Australian examples include:

Sea-level rise: Sea level has already risen 20 cm. This means that storm surges ride on sea levels that are higher than they were a century ago, increasing the risk of flooding along Australia’s socially, economically and environmentally important coastlines.

2. Climate change is making many extreme events worse in terms of their impacts on people, property, communities and the environment. This highlights the need to take rapid, effective action on climate change.

It is crucial that communities, emergency services, health and medical services and other authorities prepare for the increases that are already occurring in the severity and frequency of many types of extreme weather. The southeast of Australia, including many of our largest population centres, stands out as being at increased risk from many extreme weather events – heatwaves, bushfires, heavy rainfall and sea-level rise.

Key food-growing regions across the southeast and the southwest are likely to experience more drought in the future. Some of Australia’s iconic ecosystems are threatened by climate change. Over the past three decades the Great Barrier Reef has suffered repeated bleaching events from underwater heatwaves. The freshwater wetlands of Kakadu National Park are at risk from saltwater intrusion due to rising sea level.

3. The climate system has shifted, and is continuing to shift, changing the conditions for all weather, including extreme weather events. Levels of greenhouse gases from the combustion of fossil fuels have increased by around 40% since the beginning of the Industrial Revolution, causing the Earth’s surface to warm significantly. All weather events are now occurring in global climate system that is warmer and moister than it was 50 years ago. This has loaded the dice towards more frequent and more severe extreme weather events.

4. There is a high risk that extreme weather events like heatwaves, heavy rainfall, bushfires and cyclones will become even more intense in Australia over the coming decades. There is little doubt that over the next few decades changes in these extreme events will increase the risks of adverse consequences to human health, agriculture, infrastructure and the environment. Stabilising the climate is like turning around a battleship – it cannot be done immediately given its momentum. When danger is ahead you must start turning the wheel now. Any delay means that it is more and more difficult to avert the future danger.

The climate system has strong momentum for further warming over the next few decades because of the greenhouse gases that have already been emitted, and those that will be emitted in future. This means that it is highly likely that extreme weather events will become even more severe in Australia over that period.

5. Only strong preventive action now and in the coming years can stabilise the climate and halt the trend of increasing extreme weather for our children and grandchildren. Averting danger requires strong preventative action. How quickly and deeply we reduce greenhouse gas emissions will greatly influence the severity of extreme events in the future.

The world is already moving to tackle climate change. Ninety countries, representing 90% of global emissions, are committed to reducing their emissions and have programs in place to achieve this. As the 15th largest emitter in the world, Australia has an important role to play.

Much more substantial action will be required if we are to stabilise the climate by the second half of the century. Globally emissions must be cut rapidly and deeply to nearly zero by 2050, with Australia playing its part. The decisions we make this decade will largely determine the severity of climate change and its influence on extreme events that our grandchildren will experience.

This is the critical decade to get on with the job.