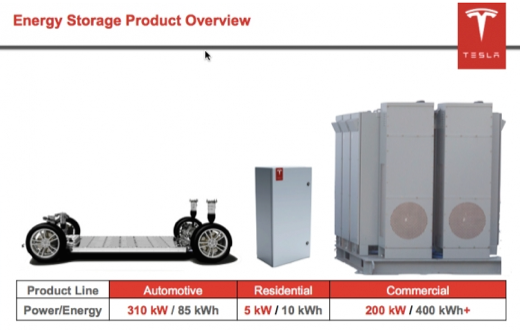 On top of taking the auto industry by storm, Elon Musk might well be on the road to disrupt the electric power distribution industry, as well, developing a battery storage system for the residential market. Tesla’s CEO announced last week that his company is looking to enter the residential energy storage market that is considered to have a huge growth potential. During an earnings conference call, Musk said that Tesla is already working on a home storage battery, that could eventually take utilities out of the picture for some homeowners.

Tesla plans to start production of a stationary battery that would power homes in about six months, as part of the company’s commitment to renewable energy and a carbon-free future. Although Musk hasn’t shared any details on the design and specifications of the battery, it will probably be a lithium-ion battery pack that will likely be manufactured in the Gigafactory that is under construction in Nevada. The residential energy storage unit will be connected to solar power systems that generate electricity through solar energy, which will be stored in the large battery packs manufactured by Tesla. This way, homeowners will either be able to completely disconnect from the grid or reduce their electric bills substantially.

The batteries for home energy storage project will be conducted in collaboration with Solar City, the company that installs solar energy systems and builds EV charging stations, and is partially owned by Elon Musk. The plan is for Tesla to supply Solar City with battery packs, with Solar City installing them at households, and later on at commercial buildings.

Tesla and Solar City are already working on a similar project together, with Tesla providing batteries to Solar City, which then sells or leases them to homeowners, so that they can generate and store larger amounts of electricity. This helps homeowners cut their electricity costs, but also, eases the strain on the power grid.

Installing large battery packs in residential buildings addresses a couple of big issues associated with solar power systems. For starters, they rely on sunlight to generate electricity, which means that they are not effective during nighttime and when there is no sunlight, forcing consumers to use electricity from the power grid. On the other hand, when the solar power systems generates more electricity than a household can use, the excess electricity is sent back to the grid, putting it under additional strain. With Tesla’s batteries, the grid would not have to deal with excess power, as they will have the capacity to store large quantities of electricity, without having to send it back to the grid.

This is reason enough for utilities to start worrying about their future and the possibility of going out of business, given that larger and more efficient batteries, paired with more affordable solar panels might make many consumers get off the grid and start relying exclusively on solar power to meet their energy needs. Even though this possibility is still far from becoming a reality, it seems that Tesla is already starting to cause quite a stir in the electric power distribution industry, which does seem to be ripe for a transformation.

Jordan Perch is a transport analyst and expert in consumer affairs for the automotive industry. He is an author on topics related to public transport, specifically the use of ride-sharing and car-sharing services, and their impact on mass transit. He is a regular contributor to SolarFeeds, the IHS GlobalSpec and DMV.com’s blog and a proud owner of a Tesla Model S.