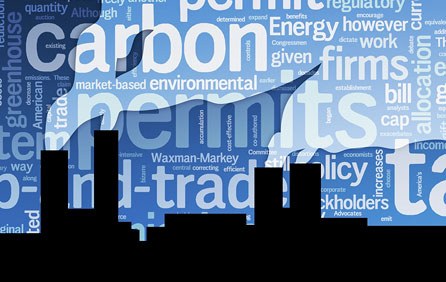 The exponential growth of wind and solar are threatening the business models of coal and nuclear turning them from price-makers to price takers. A viable exit strategy for coal plants may well be to encourage Cap & Trade so they can make a stable exit strategy before the tide of cheap renewable energy washes them out to sea.

In the 1970’s, a rising environmental movement helped raise awareness of pressing environmental concerns and advocated for policy solutions. Policy makers developed ideas based on economic modeling for trading schemes as an efficient alternative to previously used regulatory bans.

Beginning in the 1970’s and into the 1980’s, regulators used taxing and trading regimes on a number of environmental pollutants, including Freon and Sulfur Dioxide. Starting in 1995, a similar scheme was proposed for carbon pollution(Carbon Tax) and another attempt was made in 2010(Cap & trade). These attempts both died in Congress and were never enacted into law, largely due to opposition funded by carbon using and emitting industries.

This activity may now have been futile, given that new technologies in wind and solar are on the verge of causing economic disruptions to the energy industry as a whole. Wind and solar have significantly lowered their operating costs. If this trend continues it will undermine the cost and revenue models of large industrial fossil fuel operators, such as power plants.

Energy companies may start to see cap n’ trade models as an alternative way of monetizing unstable electricity markets, rather than a threat.

WHAT IS CAP & TRADE

Cap and Trade was a concept to marketize what were previously externalities of industrial processes.  The idea was to take an undesirable output such as sulfur dioxide and freeze emissions quotas to what was being produced on a certain day or the average release in a determined year.   All known users at that time would apply for quota permits which would be granted and they could then transfer these permits to new users if they ceased operations or installed more efficient process equipment.  Similar to water draw rights or cattle grazing permits, this established a market price for sulfur dioxide emissions and surprisingly rapidly drove acid rain levels down to  acceptable levels.   Electric and steel plants switched from soft coals to low sulfur coals, or added scrubbers so they could make financial decisions which are easier for corporate managers then values-based decisions which are difficult to justify to shareholders and more importantly wall street.

Over the last ten years, wind and solar have become economically and operationally efficient technologies.

Solar Power costs for PV has been decreasing in $/Watt by 20-30% per year. Installed Solar Panel growth is now rising in the US and Europe at levels of 30-40% per year. One can measure installed array sizes in square miles now.  Meanwhile wind power is growing at an equivalent rate with increased tools for off-shore installation and learning curves in land based installations  continuing to improve.  Deutsche Bank predicts that in 2014, PV will reach Grid Parity on a global basis (???) while in Australia Wind Power passed grid parity last year.  PV and Wind are unique amongst electricity sources in that they have almost zero marginal cost of operation. In an era of low cost capital, the Levelized Cost of Energy ( LCOE)  for renewables is chasing down the operating margins of coal operators.  Two years ago, Germany began experiencing negative electricity rates at night as wind turbines sought customers to allow their turbines to spin under optimal load. It being easier to  find loads then to feather or stop wind turbines.    Midwestern states that have encouraged wind production are now seeing coal operators such as exelon shutting down coal plants as they become uneconomical.  Coal plants take several hours to bring on line and have difficulty changing conditions within their steam plants unlike gas turbines which can come online in seconds and have conveniently small footprints.  Bloomberg reports  (https://www.bloomberg.com/news/2013-03-11/nuclear-industry-withers-in-u-s-as-wind-pummels-prices-energy.html) that “Right now, natural gas and wind power are more economic than nuclear power in the Midwestern electricity market,” Howard Learner, executive director of the Environmental Law and Policy Center, “.

Bloomberg reports negative pricing now occurs as often as 40% of the time at off-peak hours and has dipped as low as -$41/MWHR or  -4 cents/KWH.  Given that the Federal wind production credit is only 3 cents/KWH???? this is a

sign that wind is now moving off peak production into surplus enough to make coal based plants and nuclear plants uneconomical, with only gas turbines able to exploit the dropouts in wind production during the evening.

Numerous consumers are exploiting choice to demand renewable electricity production and numerous states have chosen to mandate minimum fractions of  electricity to come from renewables.  These changes are now provoking a furious storm of lobbying against renewables as noted by Greenpeace in https://greenpeaceblogs.org/2013/03/11/koch-brother-fronts-flood-into-kansas-to-attack-wind-industry-report/

BAILING AGAINST THE TIDE OR BAILING OUT.

Declining costs of renewables is an inexorable trend.  A critical mass of consumers and utilities have already bought in and they are dragging their neighbors and friends into the renewable age.   While no doubt, it is possible the fossil generators could attack incentives for  renewables, the global tipping point for these markets is upon us.  Even a delay for 2 years in the US will not change this.  ALEC could even try punitive taxes on renewable energy or bans on wind turbines but this will not affect the trend.  GE, SIemens, have developed sustainable business models,  and will continue to grow their users and market share. With Off-peak pricing increasingly dominated by renewable https://www.bloomberg.com/news/2013-03-11/nuclear-industry-withers-in-u-s-as-wind-pummels-prices-energy.html and the inevitable rise in peak pricing driven by solar and gas turbines,  a Cap and Trade scheme would allow coal operators in the midwest to monetize their increasingly stranded assets.   By establishing a cash value to their emissions they can sell to natural gas powered facilities that are new construction or to the transportation sector.