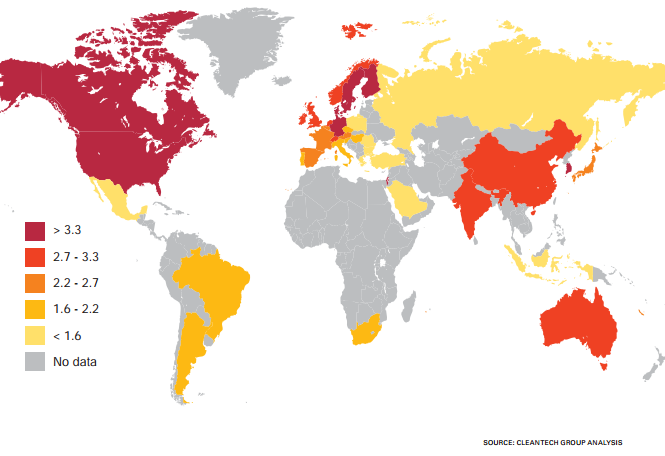 Table of Contents hide
1 Exhibit A: An Autonomous and Responsible Society
2 Exhibit B: Wrath of Nature
3 Exhibit C: Sovereign wealth, free time and lack of ‘carpe diem’
4 Exhibit D: Trust in society
5 Part 2 – What is Happening in the Nordics and Can We Learn from The Scandies?

What are the underlying factors and can others learn from the Vikings of the North?

The Nordic countries seem to consistently rank highly in global innovation rankings, topping the list Cleantech Innovation Index[i]. Although the report covers a wide range of indicators to arrive at this conclusion and indeed provides some explanatory rationale as to why the Nordics excel at cleantech innovation, it barely touches the surface. We’ve read several articles that try to dig a bit deeper, without enlightening completely. Amy Brown identifies 5 ‘explanations’ to why the Nordic countries are global leaders of cleantech in an article[ii] with the same title. High levels of general innovation, roots in creating major industries within engineering and technology, the desire to apply technological insight to environmental challenges, strong government backing and a high level of public environmental awareness are Brown’s justification of the strong position of the Nordics in the ranking. We do not disagree with these hypotheses, but they leave us with more questions than answers. We want to get to the heart of the matter: what are the underlying factors of Nordic cleantech innovation success? We set out to analyse the social, cultural and behavioural aspects of the Nordic countries that we believe contribute positively to inputs to general and cleantech specific innovation. This is what we found:

Exhibit A: An Autonomous and Responsible Society

We see a high degree of autonomy in the Nordic countries compared to most other countries. Self-government is a fundamental principle to the region and it permeates everything – from child upbringing, through the educational system, all the way into professional life. From an early age it is not unusual that teachers in school encourage their students to choose parts of the curriculum and suggest new methods of evaluating their own performance. There has even been incidents were pupils were allowed to give themselves grades for high school exams (GSCEs/SATs equivalent), where the sole requirement is that the pupil should grade themselves fairly and justly. So, young Scandinavians are taught at a very early age to be independent and to take responsibility for their own life. And when these kids eventually grow up and a source of income is to be generated, many chose to continue this path by starting their own company instead of working in an established company where people tell you what to do, a less autonomous reality.

The Nordic population seem to act more responsibly than their European counterparts (Sorry, but it is true). Scandinavians are so well-behaved it is like they have all been manufactured at a plant and that understanding that your actions affects the rest of the ‘anthill’ is the factory-setting. Most Scandies we talk to all believe ‘clean up your own mess’ is an important political principle to live by. Voilà, no state-run ‘naughty step’ is needed. This factory-setting is why littering has never been a big issue in the Nordic cities. Whereas most other capitals in Europe spend fortunes on anti-littering campaigns, they are rarely needed in the North.

Exhibit B: Wrath of Nature

In addition to the inbred principle of social responsibility, the relationship to nature can help elucidate why the Nordics feel passionate about sustainability and why they consequently succeed in cleantech innovation.

The four Nordic countries (leaving Denmark out of it) are all extremely sparsely inhabited, and they are all among the least densely populated countries in the world[iii]. In addition to the relationship between population and square meter/square feet of land, the Nordic countries are unusually decentralised – compared to other places in Western Europe, more people live in small towns and fewer in big cities. Thus a larger number of Scandinavians use untouched nature actively as a venue for exercise, hobbies, sports, recreation and meditation. This exposure differs from the lives of most urban dwelling Western populations, fostering a deep respect for Mother Nature, resulting from experiencing just how that inferiority actually feels. From getting lost while hiking, a sudden turn of weather completely disorientate you, snow giving in under you and trigger an avalanche, or trapped on a small boat in a storm, and so on. All these experiences define the ingrained respect for nature you find among Nordics and help explain why we believe we shouldn’t piss her off.

Now to an exhibit which is hard to label as best practice and copy, but it is none the less an explanation as to why the Northern Europeans spend so much time and energy inventing new sustainable solutions.

The Nordics are all are among the world’s richest countries [iv]. An extensive welfare system and a good work-life balance means that they have more time they can allocate to health, pleasure, leisure and family; but it also means that they have more time to worry about the future of our planet. As soon as fundamental physiological and safety needs are satisfied (goes for most Northern Europeans), you are more likely to worry about potential threats to your current situation.  We feel that global warming and the consequences of it are more frequently talked about with concern in the Nordic countries compared to other countries that has other more precarious things to worry about (i.e. “will this high unemployment affect me?”, “will my salary cover my mortgage this month?”).

Nordic people also seem to live less in the moment than their European counterparts. They seem prone to plan ahead and are more risk averse than other more capitalistic economies. Caution is a considered a virtue and all this translate to environmental awareness. In the Nordics it is enough that researchers know that there will be consequences when average global temperature rises for the population to take it seriously, which makes the long term investment need today supported by the majority of the population.

Another great driver for cleantech- specific innovation is that Scandinavians trust their government and the new environmental data and research are seldom the target for unnecessary scrutiny. This is of course not always a good thing; the Nordics often balance on the thin line between being trusting and naive. But in terms of cleantech innovation and in terms of motivating citizens to be cleantech entrepreneurs, it is vital that they take the research available seriously. Initial research into rising sea-levels, melting glaciers, warmer ocean depths and so forth was taken seriously early in Scandinavia (even though the link to man-made pollution was hard to prove and cause-effect proof were missing). The Nordic governments did not think it was worth waiting for this evidence before acting, and pushed this research out to the masses. It seems in some other countries that the evidence has never been compelling enough to result in stronger action or to garner support of the population overcoming the endless political manoeuvring.

Part 2 – What is Happening in the Nordics and Can We Learn from The Scandies?

Now we have a better understanding of the Scandinavian mentality Part 2 of this article (forthcoming) will talk about how all of these aspects come together and were exemplified at the fantastic Cleantech Venture Day 2012 attended by GLD in Lathi Finland in April this year.

Watch out for Part 2 soon…

By: James Byrne and Julia Lolleng