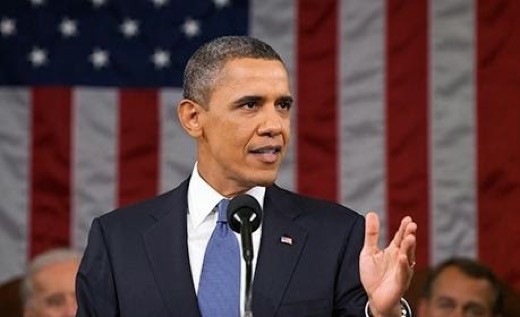 In his State of the Union speech President Obama talked about fair wages for workers, he reviewed his administrations efforts to combat climate change and he made some of his boldest remarks to date about the need to do more (see his comments below).

He referenced 9/11 and the recession saying that “we have turned the page.” He talked about economic growth, health care and immigration. He also spoke directly to Republicans saying, “We can’t slow down businesses or put our economy at risk with government shutdowns or fiscal showdowns.” and followed that up by threatening to use his veto power when he deems it necessary.

He spoke about the need to help improve wages for working Americans and upgrade their skills as well, which includes a plan “to lower the cost of community college – to zero.” He also asked for trade promotion authority so that he can help broker trade deals that guarantee fair compensation for workers.

He addressed the importance of science and technology to spur business growth and he emphasized the importance of digital innovation. He talked about closing tax loopholes that enable some businesses to avoid paying their fair share of taxes. He also indicated his support for smart development and the eradication of poverty.

In the context of the 50th anniversary of the historic civil rights march in Selma, he addressed the need to make voting easier for all Americans.

Above all he repeatedly mentioned the need for meaningful debates that transcend the partisan gridlock that has prevented Congress from doing its job.

Since 2010, America has put more people back to work than Europe, Japan, and all advanced economies combined. Our manufacturers have added almost 800,000 new jobs. Some of our bedrock sectors, like our auto industry, are booming. But there are also millions of Americans who work in jobs that didn’t even exist ten or twenty years ago – jobs at companies like Google, and eBay, and Tesla.

21st century businesses need 21st century infrastructure – modern ports, stronger bridges, faster trains and the fastest internet. Democrats and Republicans used to agree on this. So let’s set our sights higher than a single oil pipeline. Let’s pass a bipartisan infrastructure plan that could create more than thirty times as many jobs per year, and make this country stronger for decades to come.

I want Americans to win the race for the kinds of discoveries that unleash new jobs – converting sunlight into liquid fuel;

2014 was the planet’s warmest year on record. Now, one year doesn’t make a trend, but this does – 14 of the 15 warmest years on record have all fallen in the first 15 years of this century.

I’ve heard some folks try to dodge the evidence by saying they’re not scientists; that we don’t have enough information to act. Well, I’m not a scientist, either. But you know what – I know a lot of really good scientists at NASA, and NOAA, and at our major universities. The best scientists in the world are all telling us that our activities are changing the climate, and if we do not act forcefully, we’ll continue to see rising oceans, longer, hotter heat waves, dangerous droughts and floods, and massive disruptions that can trigger greater migration, conflict, and hunger around the globe. The Pentagon says that climate change poses immediate risks to our national security. We should act like it.

That’s why, over the past six years, we’ve done more than ever before to combat climate change, from the way we produce energy, to the way we use it. That’s why we’ve set aside more public lands and waters than any administration in history. And that’s why I will not let this Congress endanger the health of our children by turning back the clock on our efforts. I am determined to make sure American leadership drives international action. In Beijing, we made an historic announcement – the United States will double the pace at which we cut carbon pollution, and China committed, for the first time, to limiting their emissions. And because the world’s two largest economies came together, other nations are now stepping up, and offering hope that, this year, the world will finally reach an agreement to protect the one planet we’ve got.

A better politics is one where we spend less time drowning in dark money for ads that pull us into the gutter, and spend more time lifting young people up, with a sense of purpose and possibility, and asking them to join in the great mission of building America.