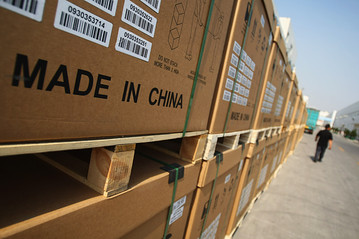 In a widely expected move, the International Trade Commission ruled  US solar manufacturers were harmed by the pricing tactics of Chinese competitors – affirming a series of anti-dumping and anti-subsidy tariffs imposed by the US Department of Commerce in October.

“The United States International Trade Commission (ITC) today determined that a US industry is materially injured by reason of imports of crystalline silicon photovoltaic cells and modules from China that the US Department of Commerce (Commerce) has determined are subsidized and sold in the United States at less than fair value.”

The six-member commission’s unanimous decision clears the way for the US to begin collecting solar tariffs of 18%-250%, depending on how much below fair market value each Chinese company sold their products.

For example, Trina Solar’s charge is 18% and Suntech Power’s  is 32%. To deter further dumping below cost, all companies that didn’t agree to be investigated will be charged 250%. The tariffs will be in effect for the next five years.

The Chinese solar industry did manage to dodge a bullet with this week’s ruling: the ITC rejected the Commerce Department’s decision to make the duties retroactive to 90 days before the preliminary amounts were set in May. That decision saved Yingli Green Energy at least $13.7 million, according Liangsheng Miao, CEO.

The ruling comes in response to a complaint brought by American producers of solar technology, led by the US-based division of Germany’s SolarWorld AG. The complaint accused Chinese manufacturers of selling their products at below-market value, empowered by government subsidies.

These tactics allowed Chinese companies to gain a “virtual monopoly on solar cells and modules sales in the US market,” says Gordon Brinser, president of SolarWorld Industries America Inc. and leader of Coalition of American Solar Manufacturing (CASM), which brought the complaint.

Here’s part of Brinser’s statement on the ITC decision:

“We have seen the results of this campaign in the marketplace, with more than a dozen companies either shutting down manufacturing facilities or significantly cutting back production and employment in the United States and a Chinese industry, led by LDK Solar and Suntech, having to increasingly turn to its national and provincial governments for help to survive. With this relief, combined with an aggressive domestic enforcement regime, there is hope that the United States can maintain a viable solar manufacturing base, conduct ongoing research and development and continue to make solar an increasingly viable part of the American renewable energy portfolio.”

No one is surprised by the ruling – affected companies have had months to prepare since the US set preliminary tariffs in May. The Commerce Department’s final tariffs did not close the loophole which allow Chinese manufacturers to avoid tariffs by simply using solar cells made in other countries.

The focus turns now to Europe, where a SolarWorld-led coalition brought the same complaint.

The issue there is far more serious, because 60%-70% of Chinese solar companies’ revenue comes from European countries.

Although the two sides have had ongoing discussions,  the matter is escalating – the European Union on Thursday said it would widen its investigation of the Chinese solar industry to include Chinese government subsidies. It too is examining dumping allegations.

“Industries in the US and Europe are becoming increasingly aware there is much more evidence of subsidies in China,” an EU official told Reuters. “But this is not a purely adversarial process. We have said to the Chinese government that we are open to finding a solution.”

Many expect the Chinese government to retaliate, especially as the country prepares for a leadership change.

Already, it has indicated that China could apply duties on polysilicon imports from the US – a $2 billion export market for the US. China has demanded the US intervene to stop supposed subsidy programs in states including New Jersey, Massachusetts and Ohio.

“If you punch someone in the nose, [the US government ought to have a backup plan for when they retaliate,” he says.

Solar installers and developers that benefit from lower solar technology costs continue to be concerned about ITC’s decision.

“Unilateral tariffs and a trade war in today’s interconnected global marketplace are unnecessary and detrimental to effective and efficient business competition,” says Jigar Shah, president of the Coalition for Affordable Solar Energy. “We will continue to encourage dialogue and negotiation between the US and Chinese governments to seek a constructive resolution.”