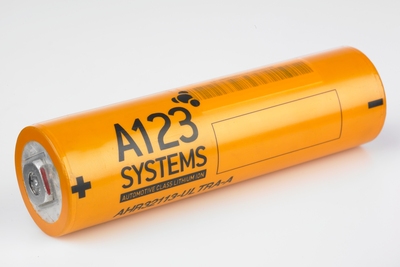 As its losses deepen, A123 Systems is reaching out to China for a new financial lifeline.

Under the terms of a new non-binding memorandum of understanding, the electric vehicle battery maker could receive up to $450 million from China’s largest automotive components supplier Wanxiang Group Corporation.

A123, which makes advanced lithium-ion technologies, supplies batteries to Fisker Automotive and GM’s Spark electric cars and it also provides its technology for energy storage. The recipient of a $249 million grant from the U.S. Department of Energy back in August 2009, the company is facing an investor class action lawsuit and was part of the battery recall earlier this year. With the mainstream electric vehicle market stuck in neutral, it has struggled to keep manufacturing costs down.

“Today’s announcement is the first step toward solidifying a strategic agreement that we believe would remove the uncertainty regarding A123’s financial situation,” says David Vieau, the CEO of A123. “A substantial capital investment from Wanxiang would not only provide financial stability to A123 as we continue to grow, but it would also align us with a large successful global brand in the automotive and cleantech industries.”

The agreement calls for Wanxiang to provide A123 with initial debt financing of $75 million, followed by extensions of $25 million and $50 million if certain conditions are met. The memorandum also outlines conditions for purchases of senior secured convertible notes, a transaction that is subject to government and shareholder approval.

Wanxiang’s total capital investment under the financing outlined in the agreement would be approximately $450 million.

Wanxiang is one of China’s largest privately owned companies, with more than $13 billion in revenue. It employs 3,000 people in the US.

“A123 offers industry-leading technologies for vehicle electrification and grid-scale energy storage, as well as strong manufacturing and systems engineering capabilities in Michigan and Massachusetts,” says Weiding Lu, CEO of Wanxiang Group. “We think this creates important synergies with Wanxiang, which has been involved in this field for 12 years and has strong R&D and manufacturing capabilities in China, especially as we continue to expand on our strategy of investing in the automotive and cleantech industries in the US.”

During the second quarter, A123 Systems announced new breakthrough technology called Nanophosphate EXT that improves the capacity and capability of its electric vehicle batteries in extreme temperature conditions. Battery technologies typically experience reduced performance at very high or very low temperatures. It has signed its first production customer for the technology and expects to ship it in the first half of 2013.

Also during the quarter, A123 expanded its relationship with BAE Systems, which already uses its technology for nearly 3,000 hybrid buses worldwide.