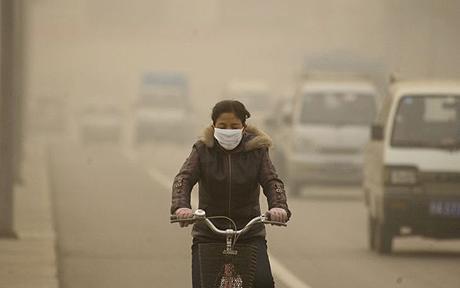 China has long been one of the most controversial nations on Earth, for a variety of reasons ranging from the one child rule to human rights.  Their recent presence in the Western media, however, has been dominated by their approach to reducing carbon emissions.

How do you Outsource Emissions?

This sounds like something of a strange practice to most people. They understand how you can outsource something like a web development project or some copywriting work, but not carbon emissions.

In fact, the process is basically the same. Recent months have seen various warnings issued to residents in Beijing, China’s capital city, and in Shanghai, its business center, warning that it is unsafe to go outside. Clearly, this is an area for concern, as it everyone was to stay indoors you’d be looking at the breakdown of society!

To get around this, China’s latest initiative is to move production out of the cities and into poorer areas of the country. While it sounds a sensible enough plan, there has understandably been controversy at an initiative that is essentially saying, “You make our luxury goods, and in return we’ll give you air that is dangerous to breathe.”

In doing this, China is following a classic management practice; instead of dealing with the problem at hand – carbon emissions and air pollution – they’re simply moving it somewhere else. The trouble is that whether emissions are in Beijing or on the Mongolian border, they’re still in China.

Controversy has arisen because although authorities in the cities could easily take action, they’ve chosen this option purely because it is cheaper. Understandably, global governments and environmental agencies are increasingly concerned that China is going to be unable to meet its emissions reduction targets. The timing of the release of this research couldn’t be worse, given that President Xi met with Barack Obama last weekend and apparently agreed on some actions China would take.

There has also been suggestions from within the Chinese government that they have even planned to outsource emissions to other countries. Imagine that. Global companies look to Chinese companies for cheap manufacturing, who then outsource it to Uzbekistan, for example, to have it produced even cheaper.

Perhaps the only thing to stop China following this path will be when companies start approaching the countries that China is outsourcing to.

In reality, the only solution to the problem is for China to explore real world alternatives that can reduce carbon emissions. Vector Foiltec are one company that already has a presence in China, and their environmentally friendly building designs and green construction practices could, and should, be followed in a country where the infrastructure is still growing at pace.

Money will need to be spent, too, so that the problem is dealt with rather than shifted elsewhere. China will meet with nothing but ridicule if they start saying they’ve met their emissions reductions targets, but look at how much carbon Uzbekistan is now pumping into the atmosphere. Demand for power and energy isn’t going to decrease, either, and it is unlikely outsourcing power stations emissions will be practical or cost effective.

Although China is the world’s foremost economy, they have a number of challenges to deal with throughout the rest of the decade. In terms of the global interest, the environment will need to be at the top of Beijing’s agenda, for they will not be able to outsource the answers to the difficult questions that could be heading in their direction.

Teo Alvin is a science and environment journalist who travels around the world speaking to leading authorities on a variety of subjects. One of Teo’s passions is environmental conservation, a subject he studies further in his spare time. Image source.