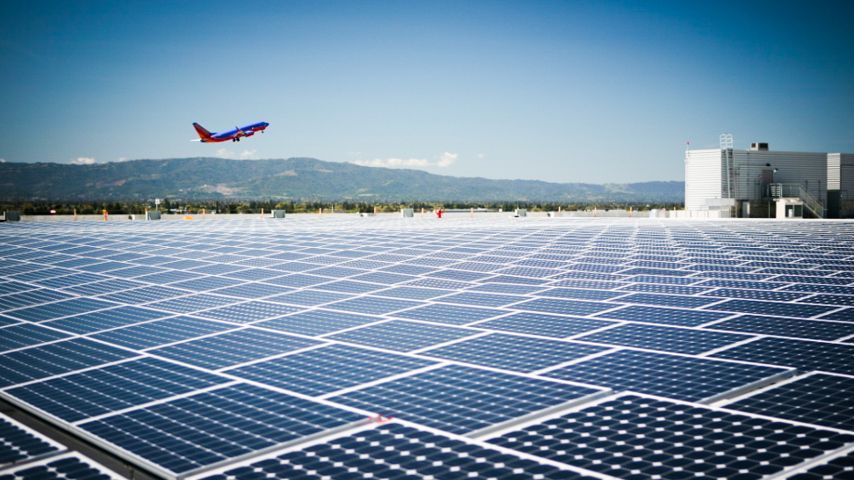 Solar panels have been a subject of long discussion around the globe. As the issues of climate change surface up, there is a lot of action happening on the lines of energy conservation and consumption. Existing dependence on fossil fuels also ignites the debate for seeking viable alternatives across the aviation and transportation sector.

These days, airports are getting technology driven by getting more advanced and in the near future, an estimation tells that international airport would be handling around 55% (app 5 million) passenger traffic (hourly basis) with a high surge in demand for amenities such as restrooms, waiting areas, lounge, etc.

On the other hand, the workload on airports is likely to increase by leap and bounds with the ongoing progress. But, still, how would everything get managed with limited fuel and resources?

Although it seems very simple, the quest for managing everything turns into an intimidating perspective. However, the debate for fuel dependence continues and various governments now agree with the fact that renewable energies will be highly trending in the near future.

However, this again strikes the chord, what will be the scenario for energy consumption in the near future for aviation sector? Will everything run on batteries? Or is there any possibility to create an artificial sun that would keep airport operations running undisturbed?

Where should solar panels be installed for airports?

Solar photovoltaic (PV) technology is a hugely accessible commodity forming the cleanest source of energy for fulfilling energy needs on earth. There have been major research activities in recent years and it apprises that PV cells would account for nearly 20% of global electricity demand by the year 2050. This indirectly implies that solar PV farms would require massive installations covering a large part of land leading to other problems: food production and agriculture.

But, the problem doubles in the event of food-producing land areas getting highly consumed for PV installations.

To overcome this problem, PV deployments can happen in the non-food producing areas surrounding the airports. The interesting thing about the location of airports is that they cater to a large population with huge demands and have unused surrounding land areas owing to safety protocols.

Secondly, what stands important is, the nature of investment to acquire and maintain suitable land. As acquired land comes under the jurisdiction of airport authorities, there can be marginal increase or decrease in the market value of land.

However, the surrounding land offers less value (in monetary terms) for airport authorities, acquired lands (non-food producing areas) surrounding the airports appear to be of a greater functional value for solar panel installations.

Along with opportunities, technical challenges occur. Identified challenges in the installation of solar panels for airport operations are comprised of radar interference, glare and reflectivity, physical intervention of other entities, communication and navigation challenges and heat radiation.

Interference causes communication disturbances in PV systems. Radar interference occurs when objects are placed within the proximity of antenna impeding the signal transmission between receiver and radar antenna. There can be a possibility of reflected signals driven by components installed on PV racking. Although, PV systems are technically low profile built with simple instruments, the occurrence of these risks is low.

It is also clear that, solar PVs that do not pose any risks and need not undergo any significant research study to determine impact of communication failure. In addition, it can also be stated that, due to their low profile structure, solar panels hardly emit any electromagnetic waves that would disrupt radar transmissions. In such events, electrical conductors are buried beneath the ground surface and are kept away from signal transmissions.

A major potential area of concern is the use of metal parts for racking of modules. Even fiber glass, concrete or plastic ideally contribute as housing electrical components. In other terms, heat absorbed by the device raises the temperature of PV modules to create a huge impact on infrared communications for any aircraft to pick up. This can be prevented by maintaining a safe distance of 150ft between communication instruments, PV modules and control tower. Therefore, an ideal distance of 500 mtrs should be maintained between a solar PV farm and airport to carry smooth transactions.

Next in the line comes, reflectivity and glare. Reflectivity is the ability of PV module surface to mirror light that may cause visibility issues to the pilot. Technically, it is called glint or glare wherein PV modules exhibit a high reflection of light. This can result in temporary loss of vision for pilots. Hence, it needs to be ensured that no installation gives 250 straight angle after installation.

Most PV modules contain anti-reflection coating and in future solar PVs can be fitted with perfect absorbers that would result in reducing reflection. For this purpose, the percentage of light reflected from PV panels is calculated through Solar Glare Hazard Analysis Tool (SGHAT). This is an online tool developed by Sandia National Lab in the U.S. However, since 2016, the access is now restricted only to commercial ventures based on licensing by Sandia.

In 2015, Federal Aviation Administration published a study that gives actual insight on how glares can impact aircraft aviation. The study revealed that a majority of pilots deceptively encountered glare for longer duration mistaking them for water bodies. A primary solution for glare problem is to prevent the angles of glare and a distance should be maintained using SGHAT analysis and techniques.

# Physical Intervention of Land and Airspace:

Commonly, on setting up airport solar panels, the physical intervention of spaces can prove fatal for airport security. Hence, it should be a mandate practice for airport authorities to restrict entry and exit policies in the farm surroundings. In addition, the surrounding fence should be at a standard distance from the airstrip wherein entry of the physical bodies are restricted at the runways and other surroundings.

Design of Solar System for Airports: A Common Approach

Having said, renewable energies will accelerate the trend in coming decade, a number of factors need to be assessed immediately to ensure smooth operations for aviation industry. There can be various factors to consider while applying a solar PV system to airport.

Location of airport and PV farms is the deciding factor. For instance, urban areas in metro cities have land size constraints as compared with rural counterparts. Secondly, weather conditions determine the PV system design once the airport location is zeroed in. Lastly, energy consumption based on airport size is a crucial factor in deciding the size and structure of a solar PV system.

A common approach to all the factors stated above is to build a backup and grid system for the airport as well as PV farms in order to achieve optimal conditions for energy consumption. Energy consumption at the airport forms as one of the significant factor for finalizing the airport PV system design. Based on the policies and regulations for power management, energy consumption through grid support for PV panels can vary. The methods used for gauging the parameters for system design can encompass open-source methods along with government support methods. For example, Government supported methods include NREL’s, Solar Prospector, Canda’s RETScreen, etc., while open source methods include GRASS, r.sun for determining solar flux and basic PV systems for modelling.

Annual weather conditions for an airport PV solar system design is one of the crucial elements in deciding the factors for energy potential. Even though, there can be ideal conditions for a flight to take off or land, it still plays a crucial role in determining the PV system performance.  Apart, weather conditions relay a strong influence, the proposed land for PV installations should be free from any future projection plans and readily available for power production. To result in economic profits, some of part of PV land can be leased out for future developmental projects, if any.

Onsite energy production means that everyday operations at airport would be less affected by decrease in use of fossil fuels. This would directly benefit air travel industry and enable airline companies to reconsider the tax on fuel prices.

On the other hand, airports charge higher landing fees in the form of additional usage fees to be borne by customers. In these scenarios, airport solar panels make the utmost sense and relay a huge potential amongst other forms of energies.

The study revealed by the National Renewable Energy Laboratory (NREL), US Department of Energy, tells that there are vast lands lying vacant surrounding the major airports. Using this space for solar arrays, the average energy production would sum up to 1.16 million MW annually; which is identical to the mass of energy produced by 110 coal-fired plants.

Moreover, feasibility studies have an economic role to play in the global energy markets. Hence, these help in understanding the pattern and rate of energy consumption at any given point of time.

There are no doubts that the widespread adoption of solar PV panels by airports across the world gained tremendous attention. Even, private companies have begun offering PV facilities at airports on lease and rental basis. For instance, most parts of PV farms are owned by airports, while some run through lease basis. From the regulatory perspective and strategic framework, policies and guidelines clearly reduce the potential risk and enable great chances of project approval.

For instance, the global interest of United Nations (UN) for PV installations at airports results in an unprecedented growth to align PV electricity with rooftops via a gate electrification equipment. In addition, the ‘UN gate decarbonisation method’ is one of the recognized method for PV energy produced at courtyards to decarbonize aircraft at the entry point of the gate.

However, it is also clear that the technical challenges can be overcome by having large-scale deployments. Run-time tests and trials have already demonstrated that PV modules enable in incorporation of safety within airport premises.

The paradigm shift from traditional fuels to solar energy panels reveal major breakthroughs and empowering airports with easy access to renewable energies. These systems can prove to be of great socioeconomic advantage to the local markets. The cost of grid electricity and the price of PV modules tend to prove with enormous advantage under effective deployment.

Overall, by 2030, the airport solar panel market is anticipated to witness a threefold rise. By having, modular and distributed deployments, solar PV technology is expected to adapt to a wide spectrum of off-grid applications.

In the past ten years, the installed capacity of off-grid solar PV grew ten times. Therefore, it can be considered that off-grid solar PV for airports is a key for achieving sustainable development goals for energy development. Scaling up solar PV energy is critically accelerating installation processes in the coming years. Moreover, technological implications and improvements will continue to steer a robust market growth of PV panels for airports with a huge decline in operating costs.

The Solar PV panel is a fast evolving industry driven by innovation with a foresight for strengthening value chain and achieving optimal cost reduction for airport operations.