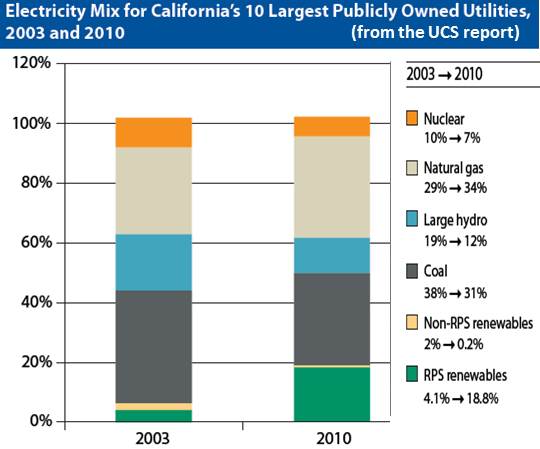 Governors Schwarzenegger and Brown and the majority of the state’s lawmakers were encouraged enough to institute a new Renewable Portfolio Standard (RPS) requiring all state electricity providers obtain one-third of their power from renewables by 2020. It will certainly grow California renewables.

But will the new, more ambitious RPS continue to grow the use of wind, solar and other renewables?

The Clean Energy Race; How Do California’s Public Utilities Measure Up?, an analysis of the 2010 numbers from the Union of Concerned Scientists (UCS), showed an even better response to the 20 percent mandate on the part of California’s ten biggest publicly owned utilities (POUs).

POUs generate approximately 25 percent of the state’s electricity but, because they are locally governed, were given flexibility in the 2002 RPS.

Nevertheless, the POUs outdid the state’s IOUs in the shift to renewables. The combined thirteen biggest utilities — three IOUs and the ten POUs — provided 87 percent of California’s retail electricity in 2010. About 52 percent came from fossil sources. The ten POUs cumulatively grew their sales of RPS-eligible, renewables-generated retail electricity from 4.1 percent in 2003 to 18.8 percent in 2010.

To be RPS-eligible, the electricity must come from “wind, sun, geothermal heat, biomass, biogas, fuel cells using renewable fuels, hydropower [of no more than 30 megawatts], municipal solid waste [under certain conditions], or wave or tidal power,” according to the UCS report. It must also come from the Western Electricity Coordinating Council (WECC) transmission region. Almost half of the POUs’ renewable additions (43 percent) came from “long-term investments in new renewable energy resources built after the original RPS was enacted,” the UCS reported. But, it pointed out, “the POUs still relied on electricity from fossil fuels for two-thirds of their retail sales.”

The RPS was especially effective at stimulating the growth of solar, wind and biofuels. While much of the geothermal and hydro in the 2010 renewables portfolio was in service before the enactment of the 2002 RPS, the UCS report noted, relatively large quantities of wind, solar and biofuels were added afterwards.

Roseville Electric, Burbank Water and Power, and Imperial Irrigation District, according to the UCS report, have had a “false start.”