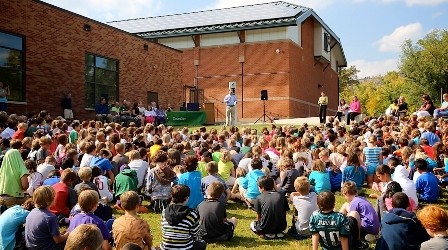 Solar panels installed on the roofs of 14 schools in Colorado’s Boulder Valley school district are now generating 1.4 megawatts of electricity while saving money for education.

In one of the biggest solar projects for a school district, half the schools now run on solar – 30 in total.

SolarCity installed (and owns) the 5,000 solar panels on the 14 roofs under its solar leasing model. That means the District didn’t pay a cent and will simply buy the electricity under a 20-year power purchase agreement. The system was built in just nine months.

Because a solar lease is less expensive than buying electricity from the utility, the district will save 10-15% on its yearly energy bills, one of its biggest costs. That money will go toward educational programs.

And students will track how much electricity their school uses and the power the solar system generates using SolarCity’s web-based monitoring.

Boulder’s school district – one of the greenest in the nation – is also starting the Schools Going Solar program, which teaches students the basics of how solar works in grades 5-12. The program was developed by the National Energy Education Development (NEED) Project.

Other school districts with similar amounts of solar include the Oak Grove School District near San Jose, California, with 1.8 MW, and 10 catholic schools in New Jersey, with 1.5 MW. South San Francisco’s Unified School District has 1.7 MW.

Silicon Valley’s East Side Union High School District has the biggest in the country at 7.1 MW – it saves $3 million a year, enough to pay 30 teacher salaries.