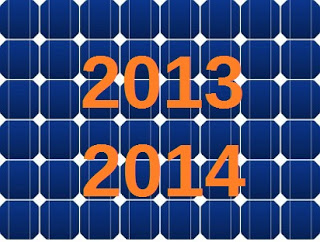 Over the next two years solar power can be expected to move closer to grid parity. In 2012, despite obstacles, solar power continued to grow. In 2013 and 2014 we should see surprisingly strong growth in the photovoltaic (PV) industry.

One of the major obstacles faced by solar PV manufacturers is the higher costs of silicone which has increased the costs of manufacturing associated with solar PV.  But by the end of the year costs are expected to stabilize and pricing will improve by early in 2014.

As reported in Bloomberg, Gregory Wolf, president of Duke Energy Renewables, believes that  for the first time, the US will add more solar power in 2013 than wind energy.  Wolf said the US can be expected to install 3 to 4 gigawatts (GWs) of wind and solar projects in 2013.

But Wolf is particularly bullish on solar. “I would expect a lot of momentum still on solar…We really ramped up our solar in 2010,” he said. “Today most of the projects are half or less of the cost now than then.”

The US installed about 3.2 GWs of solar power last year and may reach 3.9 GWs this year, according to data compiled by Bloomberg. While Bloomberg anticipates 3.9 gigawatts of installed solar energy this year, that figure may be as high as 5 GWs installed solar in 2013.

China has moved their 2013 prediction from 3 GWs around a year ago to a recent plan of 10 GWs.  These optimistic numbers are attributable in large part to decreasing costs, more financing and a weakening of other power markets.

Reduced costs also include BOS (also known as “the balance of system” which refers to all components other than the panels). There are now more private investors and institutions providing financing for the solar industry. Many projects that were put on hold in 2012 are likely to get the green light in 2013 and 2014. However this increased demand will likely result in a reduction of the available supply.

Cheap panels, lower manufacturing costs and policy support are destined to make 2013 and 2014 important years for solar. While the overall prognosis for the industry over the next couple of years is good, there are likely to be some major shake ups in the solar manufacturing industry.

Previous ArticlePREDICTION: U.S Will Produce More Wind Power Than China Before 2020Next ArticleSolar Manufacturing: Not as Toxic as Fossil Fuels