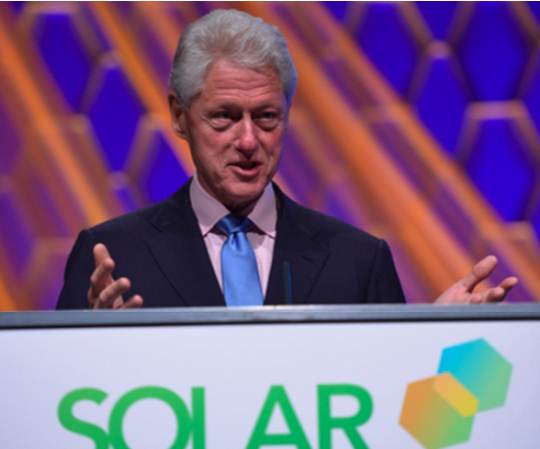 He has only 308 solar panels on the roof of his presidential library, former President Bill Clinton announced at the opening of his Solar Power International 2012 keynote, and he is taking bids to drastically expand. “So if anybody wants in, send me an email.”

He then picked up the subject of creative cooperation he talked about at the Democratic National Convention.

To build “energy that is good economics, saves the planet from the worst consequences of climate change and promotes the national security of every country that is committed to clean, self-sustaining energy, you have to have cooperation between government and the private sector,” he said. “The constant mud fight, fact-free environment in which American politics often operates is counterproductive.”

He told a story about a minister who, during a sermon, excitedly told everybody in the congregation who wanted to go to heaven to stand up. Everybody but one little old lady in the front row did. “Sister Jones, the minister said, you are most devout member of our church. Don’t you want to go to heaven when you die?”

“She immediately jumped up,” Clinton said, “and yelled, Yes! But I thought you were trying to get a load to go right now.”

“Folks,” Clinton then said to the solar industry audience, “we need to get a load to go right now!”

To make that happen, he said, “Americans need to know more than they know now.” Most do not know that 100,000 people work in solar, that more people work in greentech than in coal, that in the depths of the recession, greentech grew at 8 percent, and that venture capital made the U.S. first in the world in greentech investment in 2011.