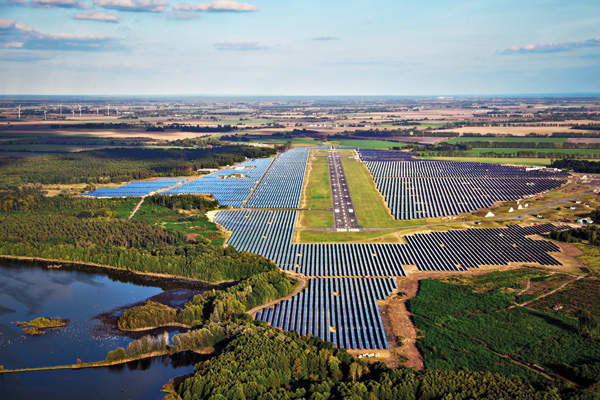 Solar power in Europe is getting boosted by the increasing production of the largest solar projects or solar power plants.

Solar energy is the fastest-growing and lowest cost source in the world.

In Europe, solar capacity increased by 36% to 8 GW in 2018. In the next two years, several member states in the European Union will push to meet their 2020 renewable energy targets.

Particularly countries such as Spain, France, and Italy will secure their place at the GW-scale annual installation level.

Most of the countries in Europe are ready to embrace the new 32% EU 2030 renewables target.

The ‘Clean Energy For all Europeans’ legalization gives the solar sector a solid policy framework that paves the way for much more versatile, low-cost solar investments in Europe.

In this post, we have included the largest solar projects in Europe that are and would play a key role in expanding the solar power market in the continent.

The construction of Francisco Pizarro plant in Spain is underway, which is going to be the largest solar plant in Europe.

The new solar project will have a capacity of 590 MW and will install nearly 1.7 million solar panels spread out in more than 1,300 hectares.

The plant will supply energy to 375,000 people every year and employ up to 1000 people during the construction.

Iberdrola SA is working to build the solar plant at the cost of €300 million ($337 million).

The company will now comply with the government rules to hold public hearings and receive comments on the impact of this project on the environment and for landowners. It is a mandatory process before beginning a project.

The renewable energy market in Spain has been going upward over the past several years due to energy auctions and the intent of the government towards installing more green energy.

Spain is one of the hottest renewable energy markets and is about to deliver 7 GW of solar and wind in 2019.

The government has set a target to install between 6,000 and 7,000MW of renewable power every year until 2030.

Nikopol solar power plant is a photovoltaic (PV) power plant located in Dnipropetrovsk region of Ukraine. The capacity of the plant is 246MW.

It is one of the biggest solar power facilities in Ukraine and one of the largest in Europe. The total cost of the project is approximately €230m (£205.7m).

The project had been initiated as part of Ukraine’s national energy strategy, which has set a target to achieve a total renewable energy production of 5GW by 2020. Also, it will reduce carbon emissions by 40% by 2035.

Construction of the project started in April 2018, and the first power was distributed to the national grid of Ukraine in March 2019.

The plant will meet the energy needs of 100,000 households in Ukraine and reduce carbon dioxide emissions by over 300,000 annually.

Cestas Solar Farm in Bordeaux, France, is third in Europe’s largest solar plant list with a 300 MW capacity. The park can provide power to 300,000 homes.

The solar facility is covering 2.5 sq. km., and was built by Neoen, and it became live in October 2015. The estimated cost of building the facility was €360 million.

Cestas will sell its solar energy for a price of 105/MWh ($111/MWh) for 20 years. The pricing is almost at the same level as wind power and cheaper than nuclear energy.

The plant consisted of 25, 12 MW sub-plants and was delivered to the grid through a consortium of contributors mainly from France, including French infrastructure company Eiffage and Schneider Electric.

The park was connected to high voltage network Réseau de transport d’électricité (RTE), which provides electricity across the country.

Neuhardenberg solar power plant is another top solar project in Germany and Europe.

The project has been developed on a former military airfield at Oderbruchstraße, Neuhardenberg.

The solar plant is set-up in an area of 35 hectares airfield site. The plant has a total capacity of 145 MW.

The construction of the solar park was completed in a record time of five weeks with nearly 2,000 personnel worked until the end of September 2012 to complete this project.

As many as 60,000 PV panels have been installed in the plant, and the modules have a maximum power between and 235W and 240W.

The plant produces nearly 19.69 million kWh/year of solar electricity, and that is enough to power 48,000 homes. It is also expected to reduce almost 12,700 tonnes of carbon dioxide emissions annually.

Danish Airport Development and Solarhybrid developed the PV solar project. BaySolar Projekt was the contractor to carry out engineering, procurement, and construction (EPC) of the project.

The Arnedo Solar Plant is a solar PV power plant located in Arnedo, La Rioja, Spain. The plant is on 70 hectares (173 acres) of land.

The construction of the solar plant started in February 2008. The project needed a large logistical deployment to receive and ship to Arnedo supplies from three different continents (Asia, Europe, and America).

T-Solar, a clean energy producer, has supplied the solar panels and operate the solar plant. The total cost of the project was €181 million.

The solar plant will provide electricity to 11,451 households, and reduce carbon emissions of 17,877 tonnes.

The Andasol solar power station is the first trough power plant in Europe.

Engineering, procurement, and construction (EPC) of Andasol 1 and Andasol 2 located in the region of Guadix, in Granada, Spain.

Due to the high altitude (1,100 m) and the semi-arid climate, this solar power plant site gets exceptionally high annual direct insolation of 2,200 kWh/m² per year. The capacity of the Andasol plant is 150 MW.

The solar collectors installed in the power plant have a combined surface area of 51 hectares (equivalent to 70 soccer fields), and it occupies nearly 200 hectares of land. The thermal storage system capacity is 7.5 hours each.

There are tanks of molten salt (150 lbs of salt per kWh at a storage temperature of 400 °C) that allow the power station to produce energy even when it is dark outside.

The cost of thermal energy storage is roughly US$50 per kWh of capacity, according to the US National Renewable Energy Laboratory (NREL), which totals about 13% of Andasol’s initial cost.

The power station comprises three different systems — Extresol 1, Extresol 2, and Extresol 3, with 50 MW each, because of the power limitation of 50 MW per plant set by the Spanish legislation.

The name of the power station, “Extresol” came from the name of the autonomous community, “Extremadura,” and the Spanish word for “Sun.”

Extresol plant uses parabolic trough and has a thermal energy storage system, which partially absorbs the heat produced in the solar field during the day and stores it in molten salts. The plant’s thermal storage system has a capacity of 7.5 hours.

There has been a huge spike in demand for solar power all over the world. Especially, the governments in European countries are supporting with clean energy-friendly policy, increasing credit availability, and offering financial incentives.

The above listed Europe’s largest solar power plants in this post have been making huge contributions by producing a substantial amount of solar energy and helping to provide solar power to thousands of homes and offices.

More European countries have made long-term plans to come up with solar plants with significant capacities, which will consolidate the continent’s position as a dominating force in solar energy.