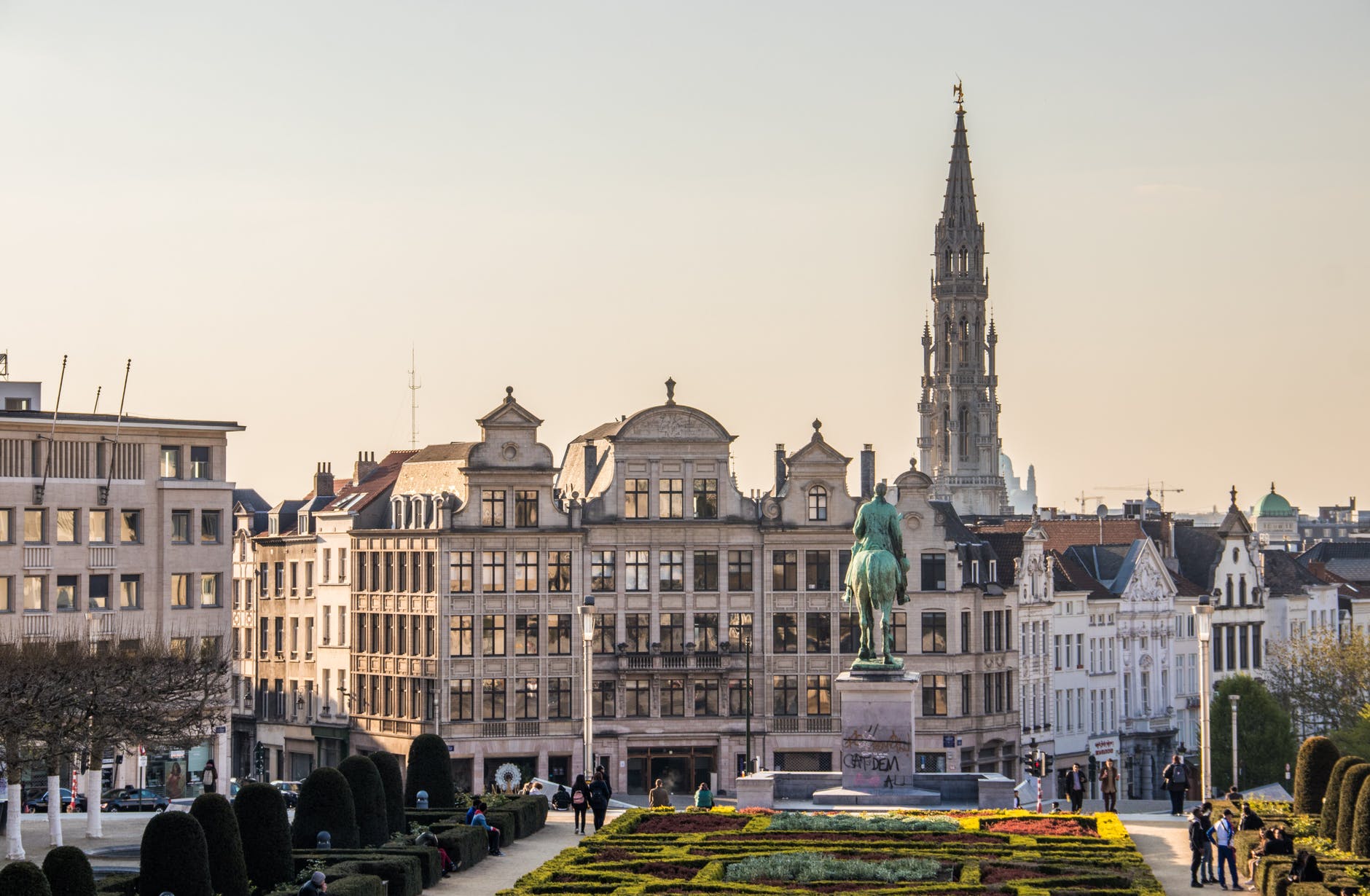 The main reason for the success of solar in Belgium is the collective awareness of the global renewable energy initiative among the authorities. The country’s accelerated development of its solar industry motivates international investors to invest in Belgium’s PV markets. The solar PV subsidies are another factor for an immense increase in solar panel sales across the country which can be seen in the reduced price of 93 EUR per MWh since 2013 in Belgium. Due to all combined factors, we are witnessing the country’s collective solar capacity be increase by 6 GW in general.

In this article, we shall discuss some of the major solar projects established in Belgium.

Established close to the town of Lommel in the Flemish region, Kristal solar Park is gigantic. It has a capacity of 100 MW and is one of the largest ground-mounted solar parks in the country. The installation is carried out by French solar company Engie in collaboration with Nyrstar, a local metal company. The park covers over 93 hectares and uses over 300,000 solar panels. The energy produced by Krystal Solar Park is expected to be around 90,000 MWh per year. Initially, the project was meant to accommodate Nystar’s multi-metal business by powering their smelter plants. However, the group has now decided to allow the local population to use the generated electrical energy. Now, the locals can also connect to the plant and enjoy clean renewable energy for as low as 78 EUR per MWh for fifteen years.

Wallonia secured its first large ground-mounted solar farm in May 2018. This facility is spread over 5 hectares and holds over 18,000 solar panels to produce over 6500 MWh per year. This solar farm intends to reduce the deadly carbon dioxide emissions by 1.259 tons each year. The largest solar park in Wallonia is a collaborated effort of Carmeuse, The Integrale Group, and Perpetum Energy. Carmeuse contributed by providing land for the installation of Solar Park. The Integrale Group financed the project. Perpetum Energy took the responsibility of building and operating the solar farm.

Wallonia has been working on solar panels being integrated in carports for a long time. Last year Pairi Daiza zoo and botanical gardens officially opened its PV carport to the public. According to a news statement from the zoo, approximately 62,000 overhead solar panels have been mounted in the parking lot, spanning an area of over 100,000 square meters. Out of a total of around 7,000 parking spaces, more than 80 percent are covered by the panels, making it the largest photovoltaic carport in the world.

The installation was co-financed and carried out by Perpetum Energy. Pairi Daiza is considered to be Wallonia’s largest solar facility.

The project is expected to produce 20,000 megawatt-hours (MWh) yearly, greatly exceeding the zoo’s existing electricity consumption, with a total output of a 20-megawatt peak (MWp). The head of sales for Perpetuum Energy Mr. Jerome Flament adds that the facility can reduce the carbon footprint as well as produce clean energy for both the facility and its extensions. Pairi Daiza welcomes 2 million visitors each year, so the carport shall be able to assist over 1000 charging ports to its visitors using electric cars. The electrical energy may also feed into a public network.

The structure of the carport is also made from local wood and the project is dubbed green from start to finish, as it aims to reduce the carbon emissions to zero in three years.

The farm is built on the water to supply energy to Sibleco’s Schansheide sand quarry close to the border of Antwerp municipalities of Mol and Dessel. It is not only Flanders’ first floating solar farm, but also Belgium’s largest. The facility carries constitutes of 17250 solar panels capable of producing 7 GWh per year.

The project started back in 2017 and did not stop due to Covid-19. A collaboration between Sibleco, LRM, Luminus, and Machiels, a floating PV farm became operational in October 2020. The project shall conveniently provide 55% of the energy demands for operations in Dessel. This floating PV farm shows the commitment of authorities towards climate neutrality and shall give a boost when it comes to meeting the renewable energy targets due by 2025.

Here is a short promo video of this impressive floating solar farm:

Belgium also has an international landmark in the form of 16,000 PV panels placed over an area of 50,000 m2 (the equivalent of 8 soccer fields) of a 3.4-kilometer high-speed rail tunnel. It produces 3.300MWh of electricity per year which can power 950 households. This amounts to 2.400 tonnes of CO2 reduction per year.  After the completion of the tunnel back in 2009, Luc Martens of Solar Power solution turned a flat space of 50,000m2 into a powerhouse of clean energy. The project commenced in September 2010 and was completed by the end of that year. And by June 2011 the tunnel was powering both the high speed and standard trains. The total cost was 14.5 million euros.

Because the power generated will be used internally by ArcelorMittal in Ghent, the program will help this company in becoming more sustainable. More than 5,000 employees will be able to co-invest in the solar panel project and benefit from the revenues.

The solar panels will generate 10.000MWh per year, which is enough electricity for 2,900 families. The solar panels, along with the site’s (current) 10 wind turbines and two additional planned wind turbines, will soon provide the Ghent site with around 50MW of sustainable energy. The generated renewable energy is used exclusively internally to feed ArcelorMittal’s Ghent production.

Höganäs in Belgium has undertaken a new large-scale solar project in Ath, involving the construction of about 30,000 square meters of solar panels, following the installation of photovoltaic panels on its roof in 2019.

The building’s east-west orientation was designed to ensure that its 13,188 panels receive the most sunlight. The expected production is 5,494 MWh, with 4,780 MWh being self-consumed, meeting 20% of the site’s demands. This equates to a carbon dioxide reduction of 1,000 tonnes per year.

A plant screen with 900 indigenous honey plants is also being planned in Höganäs, Belgium. These plants, along with a 1,000-square-meter wildflower bed, will supply food for insects and birds, thereby establishing a habitat for them.

A flock of roughly twenty sheep will also be used to maintain lawns around the panels, helping to reduce fossil fuel usage and improve the property.

The Studio 100 Pop-Up Theater is a part-time theater building in the Puurs-Sint-Amands district, built by Montea, a developing investor in logistics real estate in Belgium, France, Germany, and the Netherlands. Solar panels cover the majority of the Studio 100 Pop-Up Theatre’s roof. This installation of 2,559 solar panels is part of Montea’s ambitious expansion of the solar panel park to continue realizing its sustainability goals.

Solar panels were installed on two logistics buildings in Puurs. The two solar parks will produce at least 400,000 kWh annually, resulting in a 304-tonne CO2 reduction per year. Gilbert De Clercq can no longer be stopped after acquiring the lean and green star in early 2018. All investments are part of the Sustainable Corporate Social Responsibility that Gilbert De Clercq stands for.

In Ingelmunster municipality, a part of the West Flanders province, Dobbels Meat is a 3000 square meter facility where 7C Solarparken has installed solar panels covering an area of 1,500 square meters. The PV installation is a mixed arrangement of East/West and South facing panels with an annual production capacity of approximately 186,489 kWh. The estimated savings is 30% annually. This means that the whole operation can be run free for almost up to 1/3rd of the year. Two double charging stations were also installed to charge 2 commercial electric vehicles.

Katoen Natie is an international logistics service provider and port operator with headquarters located in Antwerp, Belgium. The roof-based solar system installed at their headquarters in Antwerp is projected to offset 17,000 tonnes of CO2 emissions with a production capacity of 40 MW and an area of over 800,000 m2 (equivalent to around 160 football pitches). The solar power facility generates enough electricity to meet the average yearly consumption of 14,000 homes. When the system was completed in December 2009, it represented over 25% of the country’s solar capacity.

The project exemplifies the growing popularity of photovoltaic solar energy systems on commercial roofs around the world. It highlights one of the solar photovoltaic energy’s main advantages: its flexibility to be installed on any type of roof, regardless of size, anywhere in the world. Roof installations on a broad scale have the ability to generate a significant portion of an owner’s annual electricity needs while also reducing greenhouse and carbon dioxide emissions.

The Belgian prime minister Alexander de Croo and the government strongly support the European Commission’s proposed emission reduction target of at least 55% by 2030 and have hinted at raising the country’s climate and energy goals. The administration reaffirmed the goal of phasing out nuclear power by 2025. To achieve that, they plan to increase the use of renewable energy and adapt the 2030 National Energy and Climate Plan (NECP) to reflect this. Tinne Van der Straeten, a federal Energy Minister, and a climate and energy lawyer by background, oversees the energy portfolio.

This article was written by Mark Lajhner, an owner of Solar Panels Miami.