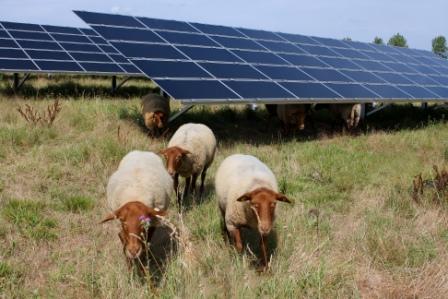 United Kingdom is seeing a raft of new Solar Farm projects in the 20-50 MW range even as the solar feed in tariffs have been sharply reduced and in the case of large scale solar farms being capped at 5 MW. This boom has come about by solar developers using the Renewable Obligation Certificate (ROC) Scheme which will around 13c/KwH to solar generated electricity. Note the costs of large scale solar farms has gone down to as low as $1.75-2.00 per watt which is less than half of what it was when the solar feed in tariff scheme started in the UK . Note solar energy has already reached grid parity in many parts of the world especially where there is lots of sunshine and high electricity prices like Italy, Brazil, Hawaii etc. The sharp crash in solar system costs is mainly due to oversupply caused by Chinese solar panel producers which have brought down the solar panel price to as low as 55c/watt from $4/watt in 2008. This means that even with very low incentives, solar power is becoming an economically viable alternative.

United Kingdom has one of the smallest percentages of its Energy being derived from clean sources. The government has not changed its policies too much as well despite its “green posturing”. Solar FIT which started in April 2010 were put under review by the authorities in as little as 6 months. This was despite only 10 MW of solar installation a month compared to the 500 MW average for Germany.

The ROC based economic model for solar energy has led to more than 600 MW of solar power projects being planned in the UK at the moment mainly led by big power developers and utilities. With the major solar powers like Italy, Germany and Spain almost shutting out large solar farms in favor of solar rooftop systems, major European solar EPC and installers are left with few options. UK is set to see a second spurt of growth driven by the ROC scheme in which solar farms get 2 certificates valued at around $130 for each megawatt hour of solar electricity fed to the power grid. Note UK Solar has not been a happy hunting ground and has not seen any solar panel boom as the government has preemptively removed subsidies before solar demand could get out of hand.

United Kingdom has learned from its neighbors so that its FIT has led to a boom from distributed small installations rather than a few large ground installations which benefit large investors. An examination of the Ofgem data shows that the average size of the solar installations is between 2-3 KW which is markedly less than the global average. UK’s farmers and commercial establishments like retailers have taken advantage of the scheme as well. United Kingdom has been known for its large offshore wind farms in the Green Energy area. However this well designed policy promises to put United Kingdom in the Solar Energy Map as well.

Solar Farms or Giant Solar Power Projects consisting of thousand of solar panels installed on acres of land are increasing  rapidly in the USA. While the European governments are discouraging the use of large installations of solar panels, the US is going the opposite way in installing these  power plants.

1) Lower Cost and  Scale – The greater scale of these plants allows lower installations compared to smaller installations. The costs  are reduced in permitting, maintenance as well.

2) Use of Disturbed Land – Solar Farms can be built on disturbed land like in Germany where they have been built on former airbases.

3)Utility Friendly – Large Solar Farms are controlled by utilities or IPPs while rooftop solar is generally in the ownership of residential owners or commercial owners. This results in less push-back from utilities which generally control transmission and allow easier acceptance of solar energy.

1) Long Delays in Permitting, Environment Clearance, Land Siting– Large Solar Farms have to go through a myriad of regulations and clearances. There have also been instances of lawsuits against solar thermal and solar PV plants in California by wildlife and environmental groups as well as local Indian tribes.

3) Less Grid Stability – A Large Part of Distributed Solar is consumed locally while Farms supply 100% to the grid. That makes managing the grid difficult when solar penetration increases. (Source: Wikipedia)

Distributed Solar Energy will become more and more important as the costs of solar energy decline. Governments around the world are also coming around the view to promote solar energy while utilities favor large scale solar farms. With increasing penetration of solar energy the whole raison d’etre of utilities become non-existent so they favor solar farms. On the other hand rooftop solar makes energy more democratic and also ultimately reduces transmission costs as well. However in the near future, both solar farms and rooftop solar should coexist.