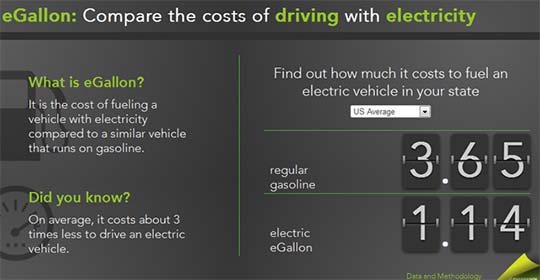 In June, during the Electric Drive Transportation Association gathering, the Energy Department announced the rollout of their eGallon initiative, a tool to allow americans to estimate the driving costs of electric vehicles and plug in cars by comparing the local costs of electricity and gasoline.
This allows insight for owners beyond just looking at the current price of gas. This author believes the next rational step is to enhance this tool to include local costs for solar PV and sun intensity and local incentives so to produce a SunGallon, the Solar equivalent to a gallon of gasoline.

To quote from the DoE website, “The eGallon provides a metric that is easily comparable to the traditional gallon of unleaded fuel. That comparison is made by calculating how much it would cost to drive an electric vehicle the same distance as a similar conventional vehicle could travel on a gallon of gasoline. For example, if gasoline costs $3.60 per gallon in your state and the eGallon price for your state is $1.20, that means that for $1.20 worth of electricity you can drive the same distance as you could for $3.60 worth of gasoline. The eGallon price varies from state to state based on the price of electricity. ”

A SunGallon which can be adjusted for both the local solar conditions and the local incentives may provide a useful tool to purchasers of electric vehicles. Hawaii and the sunny Southwest are optimal places for a solar PV array. Knowing how this would help offset gasoline purchases would allow consumers to make better choices.

The level of effort for a proper SunGallon website would take some work but would provide real value to the consumers and help show the synergistic effects of residential Solar PV.