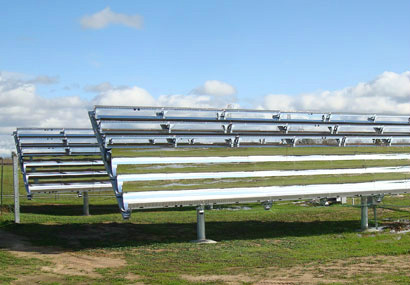 Apple’s newest datacenter, under construction in Reno, Nev., plans to take advantage of the sun with an 18 to 20 megawatt SunPower C7 Tracker photovoltaic array, according to reports. The Ft. Churchill Solar Array will likely be the biggest yet for SunPower’s relatively new tracker system and the first under NV Energy’s new Green Energy Program.

The plans for the new array were unveiled in an NV Energy Public Utilities Commission of Nevada filing on July 1. In the filing NV Energy explained that Apple would pay for the project, according to Gigaom, which first reported on the project.

While the 137-acre project was mentioned in the filing, it must still be approved by the commission and regulators, which could take up to six months. The project is anticipated to take eight months to complete and could be operational as soon as the end of 2014.

The new array is Apple’s latest effort to green its energy supply. “All of Apple’s data centers use 100 percent renewable energy, and we are on track to meet that goal in our new Reno data center using the latest in high-efficiency concentrating solar panels,” the company said in a statement. “This project will not only supply renewable energy for our data center, but also provide clean energy to the local power grid, through a first-of-its-kind partnership with NV Energy.”

NV Energy’s new Green Power Program has a rate tariff that was approved in June. “We’re excited to be in partnership with Apple on a new solar energy project, the first project under our new Green Energy Program,” said Michael Yackira, NV Energy CEO. “This program allows customers such as Apple to choose to have a greater proportion of their energy coming from renewables than the law requires, without having a cost impact on our other customers.”

The array will also likely be the largest implementation to date of SunPower’s newer C7 Tracker technology. Earlier this year, SunPower announced it will built its first commercial-scale C7 Tracker system, a 1 megawatt array at Arizona State University.

The systems are relatively unique because they are low-concentrating photovoltaic units that use silicon photovoltaics. Most concentrating PV systems use more expensive gallium arsenide PV cells and concentrate sunlight hitting the cells by hundreds of times. The C7 Tracker only concentrates the sunlight hitting the arrays by a factor of seven times. But since the systems use far less PV cells SunPower said the system offers the lowest levelized costs of electricity (LCOE) for solar power plants available today.