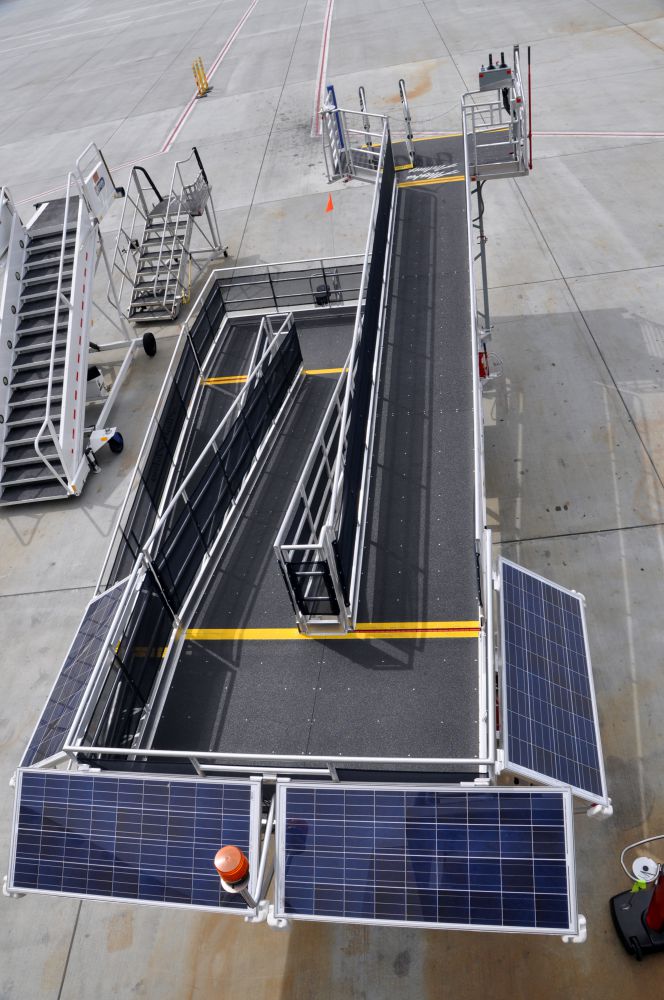 Boarding on Alaska Airlines in San Jose is getting faster thanks the addition of a new solar powered boarding ramp.

Airports normally provide jetways only for the forward door of single aisle-aircrafts. Ramps are hard for elderly, disabled or customers carrying children in car seats, Alaska Airlines said in a press release.

The new aluminum ramp is driven up to the aft door of a 737 and is covered with nonslip material. Three switchbacks provide a gentle slope easy to push up a wheelchair, the release said.

The unit drives to the aircraft where a self-leveling ramp is lowered into place forming a bridge to the door. Set at a right angle to the boarding door, it automatically guides deplaning passengers away from the aircraft to the terminal building.

The unit is solar powered but can be hitched to a tug using a standard tow bar if the drive motor’s battery dies. A fully charged battery provides enough power to operate the ramp for about four days, Warren Barden, San Jose customer service manager said in a press release.

The ramp was designed specifically for Alaska Airlines by Keith Consolidated Industries of Medford, Ore. It cuts boarding time by up to 10 minutes, the press release said.

The ramp is charged by four separate solar cells strategically positioned around the ramp to allow for constant charging regardless of the ramp position and time of day, said Mike Keith, sales manager with Keith Consolidated Industries, in an email. The four cells are capable of nearly 1 kw of input into the system. The two motors draw 60 to 80 amps under power each and the lighting system uses minimal power due to energy efficient LEDs and a computer system ensuring they are only active when needed, he said.

Using solar can save the company money on fuel, Bobbie Egan with Alaska Air said in an email. Alaska Airlines also has an initiative to reduce environmental impacts. The airlines was the first in the United States to install a wind turbine at an airport in Nome, Alaska and along with Horizon Air, recycles more onboard waste than any other carrier in the country, Egan said.

San Jose was chosen to test the ramp because the employees have experience boarding passengers from both ends of the plane using ramps and a stair truck before moving to a new terminal with jetways in 2010. The test began in January 2013. A second prototype was deployed at Seattle-Tacoma International Airport in July 2013 with improvements like better solar cell placement and a more robust energy system to support the upgrade, Keith said.