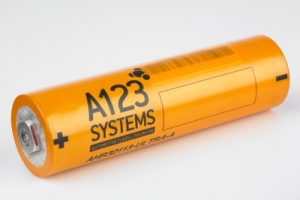 The promising but financially troubled A123 Systems lithium-ion battery maker was expected to announce today that it has made a significant advance in battery technology that will enable electric car batteries to last longer and cost less. A123 has been a leader in the race to develop improved batteries for electric cars and has received tens of millions of dollars in U.S. government grants. However, technological challenges have slowed its progress, forcing layoffs at its Michigan factory. But A123 executives are set to announce today that advances in the battery’s electrodes and electrolytes have eliminated the need for heating and cooling systems in extreme temperatures, which to date has been a major challenge. The company says it plans to begin production next year of its new battery, which uses a new electrolyte chemistry called Nanophosphate EXT. A123 also says the new battery can be used to replace traditional lead-acid batteries in conventional cars.