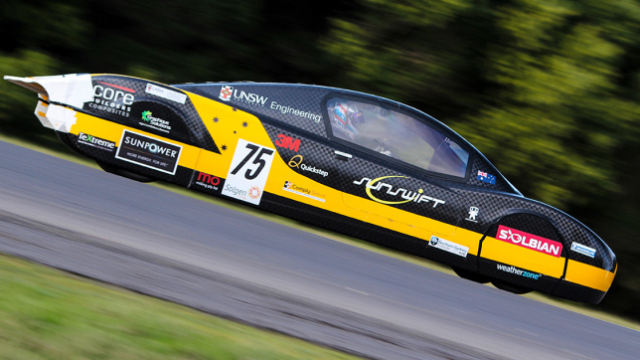 A team of engineering student’s from Australia’s University of New South Waleshas smashed the 26 year old world record  for the fastest electric car over a distance of 500 km.  The previous record stood at 73 kph, but now that record lays in the wake of the new victor in the shape of the ‘Sunswift eVe‘ solar car, which sits pretty on top of the podium with a new top speed of 106.9 kph.

26 year old project manager Hayden Smith spoke of his extreme happiness with how the world record attempt went, proving to many that there is an exciting future ahead for electric cars, with the eVe showing that even without its solar system switched on, it was able to sustain a constant highway speed for an extended distance.

The car can last 500 km on a single charge, which in all honesty is much further than the average person drives in a day anyway. And that’s only the minimum – the charge can last up to 800 km with the solar system turned on.

Smith is confident that the eVe will hit the Australian highways at some point next year. Some may question that this may be a little too optimistic because of the many changes the eVe will have to undergo in order to adhere to rules and regulations. The current car was designed almost entirely to beat the record, so offers little or no comfort to the driver because of the stiff suspension and low racing seat.

The only foot pedal within the car is the mechanical break that requires the driver to use their athleticism by crossing their legs over in order to apply pressure to the pedal, which isn’t exactly practical for the everyday driver.

As for acceleration, a paddle on the wheel takes care of that, as does another paddle which controls regenerative breaking.

All in all, the final product that these Australian students have conjured up is truly astonishing. Smith said, “It’s not often you can confidently say you made history before you even graduated,” and we can bet that Smith will be a prominent force in the electric car industry for years to come.

His main point though, for all of his and his team’s efforts, is that, “This is really about curing people’s fear of the lack of speed and curing their range anxiety, showing this car can travel at high speeds for long distances which is really what everyone wants.”