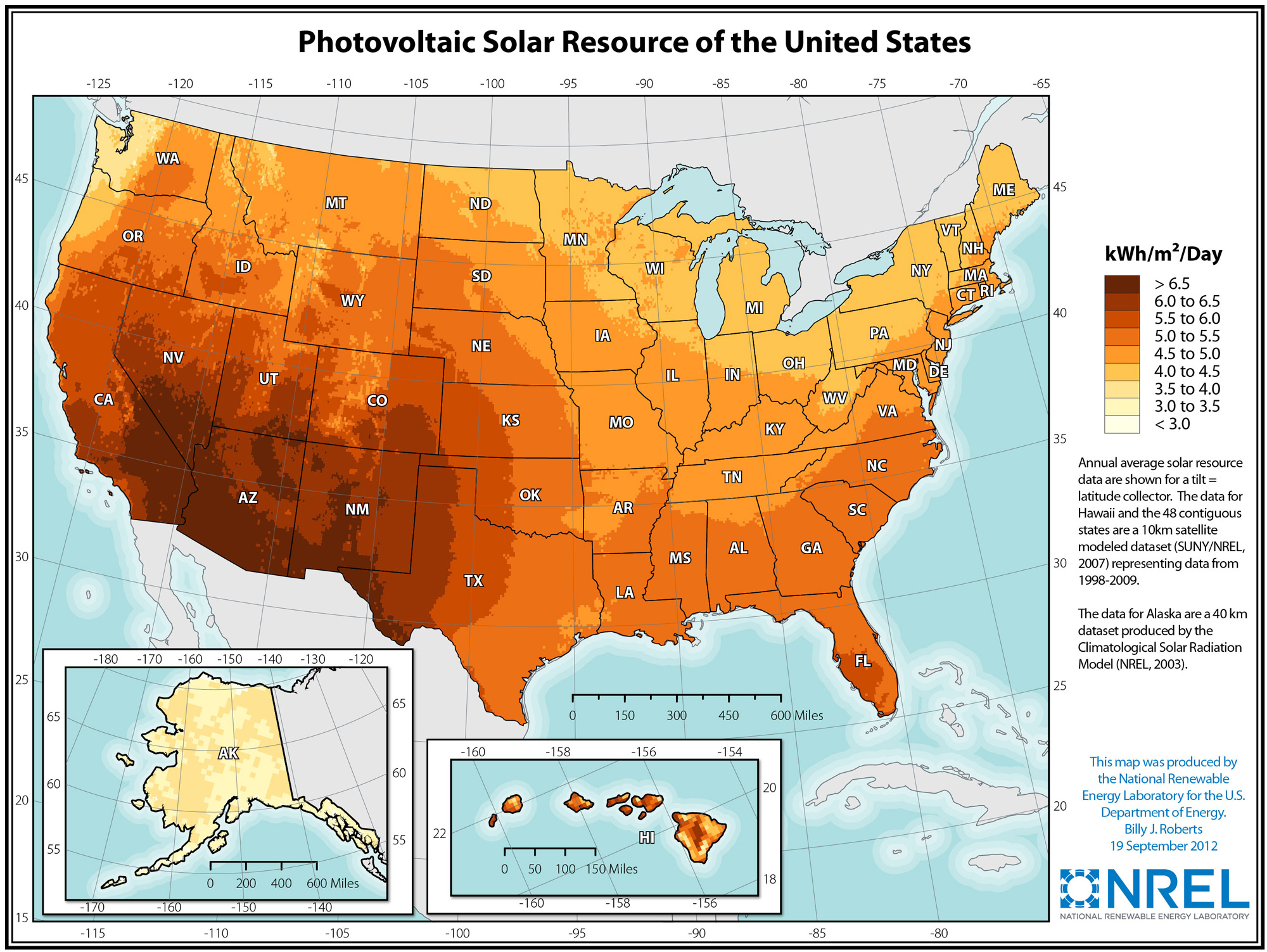 In reading the daily news about all things solar, as I do for our news coverage on SolarEnergy.net, I start to pick up on the occasional trend piece lurking among the stories of people fighting against and for rooftop solar systems.

One inescapable trend in recent weeks is the push by cities to become the “solar capital of the U.S.” Whether through abundant sunlight, residents passionate about saving money and/or reducing their carbon footprint, or smart solar policies — or more likely, a combination of the three — there are a number of cities doing right by solar.

While I’m going to start this list in the most predictable of places, you’ll see below that the contenders for Solar Leader are by no means confined to the Sun Belt.

And before we begin, perhaps it will be helpful to review a couple of similar lists from weeks and years past: In 2008, this blog covered the Top 10 States for Solar Power; and back in July 2013, we covered a more recent list, created by Environment America, ranking the 12 best solar states based on their solar capacity per capita. Together, here’s how those rankings stack up:

OK, now that that’s behind us, let’s start our own, completely, willfully unscientific list based on recent headlines.

There is perhaps no city less surprising as a contender for Best Solar City. San Diego is a sun-drenched, sprawling, wealthy metropolis that has also managed to put smart and encouraging policies in play to make solar affordable and desirable.

The city benefits from a number of state-level incentive programs, including the California Solar Initiative (CSI) rebate, the Multi-Family Affordable Housing (MASH) program and the SASH program for single-family homes. Although those incentives were all very much on the brink at the close of the latest legislative session, as we reported last month, the good news is that the state passed four laws that ensure a bright solar future for California.

At the commercial and municipal building level, San Diego has set design standards for county facilities as well as a Sustainable Building Policy, both of which encourage the use of solar and other renewable and efficiency technologies in commercial and public buildings.

But the local utility, San Diego Gas & Electric, is also encouraging rooftop solar installations through the California Advanced Homes program, which pays homeowners back when they build or renovate a home to be at least 15 percent more energy-efficient than the state’s 2008 building code requirements.

And one could also make an argument that the first signs of a “culture of solar” are appearing in the San Diego region. Case in point: The local newspaper, the Union-Tribune, has included in its last two annual “Best of San Diego” listings a category for Best Solar Panel Company, which this year included five winners and five more finalists. Granted, solar companies are still competing for attention against, say, Best Casino Buffet, but I still take it as an interesting sign. (Also: congrats to the Seasons Fresh Buffet at Barona Resort & Casino!)

What better indication of the mainstream awareness of home solar than being able to shop for it at the mall? In August, Sunrun opened the doors on a pop-up solar information store in San Diego’s Fashion Valley Mall. The location is primarily a way to raise awareness about the many affordable ways to install a rooftop solar system, but it also features other ostensible crowd-pleasers like “energy-analyzer photo booth, weekly yoga classes, and theme days.”

With all that in mind, it’s clear to see why San Diego is in a pretty good place to claim the Best Place for Solar award. But there are plenty of other contenders out there — we’re only just getting started.

In a blog post that started this whole idea for me, Devi Glick, an analyst at the Rocky Mountain Institute, wrote about two California cities that are pushing for the title of Solar Capital of the U.S.: Lancaster and Sebastopol.

Why these two cities, each unlikely but one more unlikely than the other? Both Lancaster and Sebastopol have recently passed solar mandates: All new homes in both cities are now required to have solar panels included, or designed to be ready for solar installation, at the time of construction. Sebastopol goes one step further and requires all new commercial buildings to be solar-powered as well.

As Glick points out, the two cities couldn’t be more different; Lancaster is a bustling city of more than 150,000 situated in the high desert of northern Los Angeles county; Sebastopol is a sleepy little burg of 7,400 on the outer edge of San Francisco’s commute zone in Sonoma County. Lancaster is staunchly Republican, Sebastopol even more staunchly Democratic (according to the Cook Partisan Voting Index).

Although both cities are following similar paths to solar growth — and although Glick gives both cities a tie on who’s likely to be the state’s solar leader — I’d give a clear edge to Lancaster.

As Glick points out, Lancaster’s size means that its mandate will bring more solar online: “Two hundred new homes are forecasted to be built in Lancaster this year, which means that at minimum 200–300 kW of solar will come online in Lancaster as a result of new buildings…. In Sebastopol only 16 new homes were built per year in both 2010 and 2011 … [which] works out to around 70 kW…”

And comparing the landscape of both cities, via Google Maps, shows just how much more solar potential Lancaster has, even if it wasn’t 20 times larger than Sebastopol.

Even though we’re clearly picking winners here, it’s important to note that these policies are a great boon to rooftop solar, no matter where they are implemented. (But mandating solar in a big, bustling and conservative city goes a bit further in my book than in a small, liberal, already envrironmentally focused town.)

When you’re a booming college town in the heart of The Sunshine State, solar seems like a no-brainer, right? Until 2009, it wasn’t. That’s when the city implemented its feed-in tariff (FIT) for commercial and residential solar. The program means the city’s utility will offer a fixed-price, 20-year contract to any homeowner or business owner that installs a solar system.

As the Institute for Local Self-Reliance explains, “The basic premise behind the feed-in tariff program is that anyone who wants to be a solar power generator can connect to the grid and get a 20-year contract for their power from the municipal utility. The long-term contract makes getting financing for solar projects easier and the prices are attractive. The utility pays 24 cents per kilowatt-hour generated for large-scale ground-mounted systems and up to 32 cents for small, rooftop systems.”

The program has been extremely successful, too; as of the end of 2012, more than 14 megawatts of generating capacity have been installed in Gainesville since the program launched. In a recent profile of the city leaders that helped usher the FIT into existence, John Farrell writes: “The program was also not terribly expensive, resulting in a rate increase of less than 1%. It also remains wildly popular, with support from over 70% of Gainesville residents.”

The broad adoption by city residents has made a huge impact on Gainesville’s standing in the solar community. As of the end of 2011, the per capital solar installations in Gainesville made it a global leader in solar, as this chart from ILSR shows: Based on kilowatts generated per 1,000 people, Gainesville ranks fifth in the world, behind four European nations and ahead of Japan and the U.S. as a whole.

Just as with the solar feed-in tariff program in Ontario, Canada, that we wrote about last week, Gainesville’s FIT is also undergoing changes, with the contract payments steadily declining since the program launched as the cost of solar falls. But the program so far has shown just how much demand there is for renewable energy, especially when homeowners can get a steady, fair price for the energy they generate.

Seemingly everyone is vying for some leadership position in solar energy, to the point that Renewable Energy Corporation has created a series of infographics called Solar Smackdowns, which pit one state against another to see who’s got the most solar jobs, solar companies, solar homes, and the best solar policies. And while these aren’t city-by-city matchups, it’s interesting to see the shape that solar takes in each state.

And speaking of Georgia, a recent interesting development has put that state on my list of hopefuls: Over the summer, the Sierra Club teamed up with the Georgia Tea Party to push for more solar in the state’s 20-year plan. Through the groups’ lobbying efforts — under the Green Tea Coalition moniker — Georgia Power committed to increasing its goal to 785 megawatts of solar power capacity over the next 20 years, almost triple the previous target of 260 megawatts over 20 years.

Finally, I will turn the question to you: What cities am I missing? Who stands out as a solar leader that hasn’t made this list? Let me know in the comments below or on Twitter: @MattWheeland.

The post 4 Cities Brawling for the Most Solar-Friendly in the U.S. appeared first on One Block Off the Grid.

Original Article on One Block Off the Grid